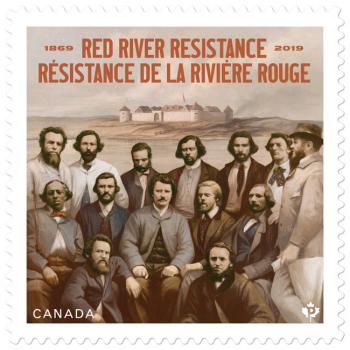 "I hope everyone in Canada buys this stamp, and that it goes all over the world.” — MMF President David Chartrand

Canada Post has issued a stamp marking the 150th anniversary of the Red River Resistance of 1869-70 when Métis protected their families and asserted their rights during the turbulent events leading up to the creation of the province of Manitoba.

The stamp was unveiled next to the historic Gate of Upper Fort Garry – now a park – the seat of Riel’s Provisional Government and the site of the Métis ratification of the Manitoba Act.

The stamp image, designed by Paprika and illustrated by Gérard DuBois, is based on two historical sources, reads a statement from the Manitoba Metis Federation: an 1848 lithograph of Upper Fort Garry and a photograph of Metis leader Louis Riel and his provisional government taken in 1870.

Throughout the development of this stamp, Canada Post worked closely with the Métis National Council.

According to a press release from Canada Post, in 1869 the Canadian government acquired a vast tract of western and northern lands that included present-day Manitoba. Alarmed at not being consulted and fearing the loss of their land and cultural rights, the Métis of the Red River Settlement stopped federal surveyors who arrived on their land without their consent.

In November that same year, the Métis, led by Louis Riel, seized Upper Fort Garry, in the heart of today's Winnipeg. In cooperation with local Anglophone leaders, they set up a provisional government to negotiate the territory's entry into Confederation. The provisional government drafted its terms in a List of Rights and continued to occupy Upper Fort Garry as a strategic defensive position from which to advance their cause.

Political and armed efforts to resolve the standoff continued over the winter. In the spring, a delegation travelled to Ottawa to negotiate, insisting that the federal government recognize the Métis people and their land and cultural rights. This "Bill of Rights" formed the basis of the resulting Manitoba Act, which brought the first western province into Confederation on July 15, 1870.

"I hope everyone in Canada buys this stamp, and that it goes all over the world,” said MMF President David Chartrand. “It is a form of visibility and presence that will memorialize (the Metis) struggle for land, sovereign rights and for the integrity of our distinct culture."

The stamp is available in a booklet of 10. Find them at your local post office and online at canadapost.ca/shop.