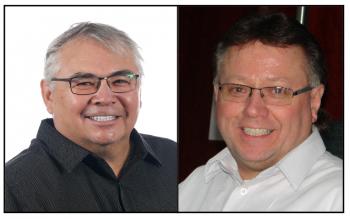 “We can't even call it co-management because the MOU is written up in a way to preserve the fiduciary responsibility of the federal government.” — Strater Crowfoot, CEO and executive director with IOGC
By Shari Narine
Local Journalism Initiative Reporter
Windspeaker.com

Updated with response from the Indian Resource Council:

The purpose of Indian Oil and Gas Canada (IOGC) is not to stand in the way of First Nations that want to take control of aspects of the resources on their land. But Strater Crowfoot, CEO and executive director with IOGC, admits that a memorandum of understanding signed 25 years ago to achieve that purpose has failed.

“We've been after the (Indian Resource Council) to ‘let's sit down and talk about the MOU. Let's upgrade it. Let's modernize it. If you want to take over oil and gas resources, let's talk about it.’ It's been in my work plan for IOGC for a number of years,” said Crowfoot, who represents the federal government on the co-management board that was formed through that MOU.

The MOU, signed between Indian and Northern Affairs Canada (INAC) and the Indian Resource Council (IRC), offered a three-phase approach: it began with co-management, moved into delegation and then finally control.

However, any movement to that end has stalled. In fact, says Crowfoot, it could be argued it never got off the ground.

“We can't even call it co-management because the MOU is written up in a way to preserve the fiduciary responsibility of the federal government. It is written in the agreement that the CEO would have veto power over any decisions the board made that would be contrary to the act and regulations (of the IOGC),” said Crowfoot, former chief of the Siksika Nation in southern Alberta.

The IOGC was created in 1987 through an order-in-council by Cabinet as an agency within INAC, mandated to manage and regulate oil and gas resources on First Nations communities. The IOGC now falls under the purview of Indigenous Services Canada.

Crowfoot said moving First Nations along to control their own resources has stalled even further as the IRC has ignored the mandate set out by chiefs to create a process for this work to happen.

“We've tried multiple occasions to set out, establish a process to get (IRC) to the table but we just can't seem to get beyond political rhetoric at this point,” said John Dempsey, director of Regulatory Compliance at IOGC and member of the Blood Tribe in southern Alberta.

Dempsey adds that the IOGC and the federal government are “fully behind” First Nations taking control of their oil and gas.

In an interview last week with Windspeaker.com, IRC representatives Stephen Buffalo (president) and Larry Kaida (assistant to the president) raised concerns about the federal government devolving oil and gas responsibilities to the First Nations without providing adequate funding.

Dempsey says he understands that concern.

“But we have to get to the point of actually negotiating what the funding formula would look like. That’s where IOGC is hung up a little bit because we can’t even get to the table to talk at that level of detail to see if that’s a barrier or not,” he said.

“It’s a complex system to take over … (so) we're proposing an a la carte approach. Do First Nations want to take over various aspects of IOGC and if so what aspects?” he said.

Crowfoot points out that the IOGC’s relationship is directly with First Nations.

He adds that IOGC wants to examine its mandate and “look towards the future,” which includes renewable green energy.

“I'm saying we're open to looking at our mandate and sitting down and working with First Nations to see what they say in terms of how the government can support what they want to do through our work as a regulator and fiduciary and so forth,” said Crowfoot.

Dempsey says he wouldn’t go as far as to say the IRC doesn’t have a role to play in moving forward, but “something has to change in the way we’re approaching this.”

To that end, the IRC did propose a third party to act as a facilitator, says Crowfoot. IOGC agreed to the person proposed and ISC Assistant Deputy Minister Kelley Blanchette approved funding. However, IRC withdrew the name because of alleged internal conflicts.

“Right now we're waiting for the IRC to give us a name of a facilitator to work with us, to talk about the mandate, the management board, what the IRC wants to do and how they want to do it,” said Crowfoot.

“The ball is in our court,” said Kaida, who added the board was asked at the last meeting to offer potential candidates. If that doesn’t happen, “we may have to make an executive decision very soon.”

Kaida said he would like to have a facilitator in place by mid-August and before IRC meets with ISC Minister Marc Miller. The IRC board passed a resolution June 30 “demanding a high level meeting” with Miller. Kaida said he was following up on that request.

A response from ISC to Windspeaker.com was received July 21 from Leslie Richardson, press secretary. Richardson confirmed that Miller had received the letter and resolution and that Deputy Minister Christiane Fox had acknowledged receipt of the resolution.