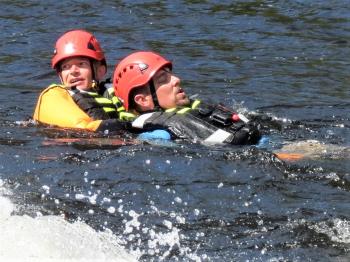 “The water was a lot stronger than I ever thought it would be. The hardest part was getting over my fear of getting into it.” — Sergeant Janet Butt
Submitted by Peter Moon
Sergeant Peter Moon is the public affairs ranger for the 3rd Canadian Ranger Patrol Group at Canadian Forces Base Borden.

A group of Canadian Army instructors from the headquarters of the 3rd Canadian Ranger Patrol Group (3 CRPG) have completed a demanding swift water rescue course and acquired advanced lifesaving skills that they will take to the First Nations of northern Ontario.

The far north of Ontario has the highest number of Indigenous deaths by drowning in Canada. The area has one of the largest Indigenous populations in the country, and few people learn to swim in the cold waters during the brief summers. People spend a great deal of time on the numerous rivers and lakes, however.

The army instructors travel on a regular basis from the headquarters of 3 CRPG at Canadian Forces Base Borden near Barrie to provide a range of training, including water safety to Canadian Rangers, who are part-time army reservists, in 30 remote and isolated First Nations across northern Ontario.

The swift water rescue training was conducted over four days at Cody Rapids on the Magnetawan River north of Parry Sound.

“I hadn’t a clue what I would be doing,” said Sergeant Janet Butt, “but it’s been fun. The water was a lot stronger than I ever thought it would be. The hardest part was getting over my fear of getting into it.  The first time you see the rapids it’s intimidating, but once you are in the water you just ride the waves and get on with it. I have a lot of bruises on my legs from hitting submerged rocks as the water sweeps you forward.”

The soldiers learned to recognize the depth and strength of the fast moving water and how to use it to reach people in need of rescue. They learned how to use hand signals to overcome the noise of the white water, various knots and pulley systems, rope work, and how to work individually and in teams. Rescue challenges included rescuing people with serious injuries and even dogs without getting bitten.

“This course taught us how to look at a river and understand what the river looks like underneath the surface by the way the water is behaving on top,” said Warrant Officer Karl Wolfe. “But more importantly we can take skills from this course to our Rangers in the North. They in turn take those lessons into the schools and the community.”

Key to the messages the instructors will pass on is the invaluable use of life jackets, the value of thermal clothing, and having a reboarding device for when someone falls out of a boat. The device can be as simple as a rope tied to the side of a boat with a loop at the bottom that can be used as a stepping aid.

“We spent a lot time on learning how to use a throw bag, which is a bag full of rope, to someone in the water,” said Warrant Officer Wolfe.

The army is working with a number of civilian and government agencies to distribute free life jackets to people in the remote First Nations. The Rangers lecture school children on the value of wearing them and encourage community members to wear them.

“I’ve seen a significant difference in the past five years on the waters up north,“ Warrant Officer Wolfe said. “The culture, especially around the youth, is changing. Life jackets are seen now as more of a tool than as a hindrance. Just because the water’s cold doesn’t mean you have to drown.”