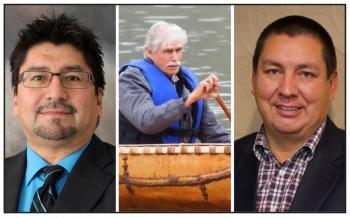 “FNPA is careful not to become a cheerleader for the nuclear industry, but to bring First Nations to the table so that they can make informed decisions.” —Guy Lonechild, First Nations Power Authority
By Shari Narine
Local Journalism Initiative Reporter
Windspeaker.com

Almost, because despite heading in that direction to approve a resolution that chiefs strengthened to direct Regional Chief RoseAnne Archibald to work with the governments to end the SMR program, chiefs fell short of quorum before they could vote. All resolutions were heard as part of the last agenda item on the second and final day of the Special Chiefs Assembly held Feb. 3 and Feb. 4.

The resolution was put on the floor by chiefs Duncan Michano (Biigtigong Nishnaabeg) and Wilfred King (Gull Bay).

Michano said the province’s push for SMR technology is to support Ontario Power Generation, one of the largest power producers in North America. In December 2019, Ontario Premier Doug Ford signed a memorandum of understanding with the premiers of Saskatchewan and Manitoba “to work collaboratively in support of the development and deployment” of small modular reactors, which includes nuclear waste management.

“We have to resist any type of nuclear processes. Just because they’re small doesn’t mean they don’t create nuclear waste,” said Michano. “They still do. They still create radioactive waste and there’s an issue getting rid of it. So what are we going to do? Have nuclear radioactive waste on all those small communities? We need to get them to abandon that and we need to get the federal government to stop supporting the nuclear industry.”

“This is just in the planning stage,” he added, “and that’s where we want to stop it.”

Calling the industry “ugly, ugly”, King pointed out the emphasis had to be made that SMRs were not to go into any community on First Nations’ traditional land.

“Even if (nuclear waste) is buried in the Canadian Shield there’s no guarantee this won’t leak into our water systems,” said King.

This was the second resolution discussed by chiefs on the topic of nuclear energy. The first resolution, also introduced by Michano and King, focused on nuclear energy disposal and use. That resolution called for all nuclear waste to be stored in above ground repositories and not underground until a permanent and safe method to destroy or neutralize the waste was developed. It also called for funding to be invested in supporting existing and potential First Nations alternative energy sources. That resolution passed.

It’s not the first time Ontario chiefs have taken a stand on SMRs.

In 2019, the Anishinabek Chiefs-in-Assembly unanimously endorsed a Grand Council Resolution opposing SMRs. The resolution stated clear opposition to the construction, operation, storage or disposal of SMRs in the territory of the Anishinabek Nation, including bodies of water.

Windspeaker.com reached out to Guy Lonechild, head of the First Nations Power Authority (FNPA), which according to the Canadian government is one of six Indigenous organizations that “endorses” Canada's Small Modular Reactor Action Plan. The action plan, says the government of Canada website, is the result of a pan-Canadian effort bringing together key enablers from across Canada, which we call “Team Canada” – the federal government, provinces and territories, Indigenous Peoples and communities, power utilities, industry, innovators, laboratories, academia, and civil society.

The western-based FNPA was established in 2011 to facilitate the development of First Nations-led power projects and to promote Indigenous participation in power procurement opportunities.

“FNPA is careful not to become a cheerleader for the nuclear industry, but to bring First Nations to the table so that they can make informed decisions. That’s central to our role,” said Lonechild.

“What we are committed to as an organization is to bring those conversations together so we can increase knowledge in terms of what nuclear technology, specifically small modular reactor technology, has in terms of benefits.”

Lonechild says SMRs, which are “much smaller than conventional nuclear plants” from five to 10 megawatts in scale, are an option in remote and northern communities for replacing diesel-powered generation, which is costly and pollution-heavy.

No First Nation to date has SMR technology operating in their community, said Lonechild.

“There are First Nations today that are examining the opportunities for small modular reactor ownership in projects. There are communities who are developing partnerships with SMR vendors and they may become owners of some of those facilities one day,” said Lonechild.

While it’s too early to tell if the partnerships look promising, Lonechild said, “It’s one of the variety of options that are being explored.”

As far as nuclear technology is concerned, Lonechild said, “It certainly comes with certain risks, environmental risks and cumulative effects.”

As for the nuclear waste from SMRs, he said “what we’re learning from some of the various options” is that spent fuel cells can be recycled to make new fuel and by-products.

According to a 2019 report from the International Atomic Energy Agency bulletin, some SMR designs require refuelling every three to seven years and there are some designs that can operate for up to 30 years without refuelling. However, there is still the issue of dealing with whatever spent fuel remains.

Lonechild adds that all technologies will have to adhere to a strict protocol outlined by the Nuclear Waste Management Organization, which is overseen by the Canadian Nuclear Safety Commission, the regulatory body.

Lonechild expects FNPA to sign a memorandum of understanding shortly with the Organization for Canadian Nuclear Energy out of Toronto to build education and training opportunities for Indigenous people in operations and maintenance and facilities management in the nuclear sector. The goal, he says, is to set up training centres in both the west and the east.

“We just think that, because the time horizon for deployment is still 10 to 12 years out, we’ve got a large amount of time that strategically we can benefit from some of these structural opportunities for education and training,” said Lonechild.

He added that FNPA is also exploring supply and management opportunities for Indigenous businesses.

FNPA is looking at setting up offices in Ontario and possibly New Brunswick.

Lonechild said FNPA started these conversations about alternate energy sources, including SMRs, in 2018 in Alberta. In August 2020, the Alberta government said it would explore SMR technology.

Lonechild said FNPA has a lead consultant in Ontario and would be pleased to meet with the Chiefs of Ontario to “put together a forum and help provide some of the answers they have questions to.”