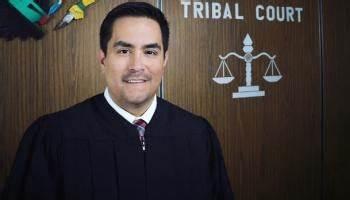 Samuel Crowfoot, now a councillor with Siksika Nation once served as a judge and prosecutor for tribal court systems in Arizona, New Mexico and Wisconsin.

“In many ways, the Canadian system is more ripe for tribal jurisdiction over non-Natives than it is in the United States. That’s a strategic advantage.” — Samuel Crowfoot
By Shari Narine
Local Journalism Initiative Reporter
Windspeaker.com

A “war chest” of $1.3 billion and the expertise and education of a new councillor have set the Siksika Nation on the path of implementing its own justice system.

After serving as judge and prosecutor for tribal court systems in Arizona, New Mexico and Wisconsin for part of the 20 years he lived in the United States, Samuel Crowfoot returned to his southern Alberta First Nation to lead the charge.

Last week, the nation announced it will be opening a prosecution office to enforce Siksika bylaws on reserve.

“This is the forerunner for us creating our own judicial system, our own courts, our own judges, our own constitution,” said Crowfoot. “We’re going to be pursuing our own form of self-government, our own self-determination. There’s no other way. We’re not going to be stuck under the Indian Act when the current system has failed us time and time again.”

Under the Indian Act, he points out, First Nations have the authority to make bylaws. The RCMP are supposed to be enforcing those bylaws, but that isn’t happening.

Now, a recent $1.3 billion land settlement from the federal government will be the “war chest” used to implement the changes, he says.

It hasn’t been easy to get to this point, says Crowfoot. Initial discussions with Alberta Chief Judge Derek Redman and prosecutors made it seem impossible. He says if he hadn’t had the experience from practising in the U.S., he may have backed down.

Instead, Crowfoot argued that Siksika had two “permissible…umbrellas” they could operate under: “We are a government having a prosecutor represent our bylaws in court or we are a private client hiring a lawyer to act as our lawyer to litigate a civil case for us.”

The call for prosecutors went out in March, but the selection wasn’t made until August. Crowfoot says a number of large law firms applied and tried to “steer us away from our goal.”

Calgary-area law firm Mincher Koeman LLP, which has worked with Siksika on their child welfare legislation, has been contracted to serve as prosecutors. A band council resolution provides checks and balances to the process and allows the law firm to prosecute band members without favouritism, says Crowfoot.

Siksika already has bylaws that can be enforced, such as trespassing and littering. Council is also in the process of passing a bylaw for protection of Elders and vulnerable people. That bylaw will have penalties, fines and “even jail time,” said Crowfoot. “Those sentencing powers are given to us in the Indian Act.”

At this point, Siksika’s peace officers, who are licensed under Alberta’s solicitor general, will be enforcing bylaws. They will be trained by the prosecutors on how to write reports, testify in court and other such duties.

Siksika is also in the process of getting its own self-administered police services. Siksika operated its own police force from 1992 to 2002 under a 10-year agreement with the federal and provincial governments. Then they were dependent on federal transfer agreements, but now they will use a portion of the $1.3 billion settlement to supplement costs.

At this point, Crowfoot anticipates having one day per week on the docket at the provincial courthouse in Siksika. As more bylaws are passed by council, more days may be added to the docket.

Crowfoot expects those cited for bylaw infractions, such as trespassing or littering, will pay the fines. However, if citations are contested, there is now an avenue for Siksika to fight.

Those living off-reserve and non-First Nation people will also be required to follow bylaws on Siksika.

“We’re going to be known as a community of public safety, law and order,” said Crowfoot.

Unlike the U.S. where non-First Nations people can’t easily be held accountable for committing crimes on reserve “essentially giving people a free pass,” as far as Crowfoot can tell, there is nothing within the Indian Act or federal statutes that offers similar leniency.

“In many ways, the Canadian system is more ripe for tribal jurisdiction over non-Natives than it is in the United States. That’s a strategic advantage,” said Crowfoot.

While the focus is on civil matters, Crowfoot says Siksika will exercise jurisdiction over criminal matters when it eventually employs its own justice system.

Crowfoot expects Siksika will come under the scrutiny of other First Nations and the general Canadian public as it pursues what is believed to be the first on-reserve prosecution office in the country.

Crowfoot adds changes won’t happen quickly and they won’t happen without “bumps and bruises” and it will be a learning process. However, he’s confident that Siksika will persevere in fully implementing their own justice system.

“People have been wanting Native tribes to fail since 1492. We’re used to that. Over 500 years of that attitude. We have no problem. This is an environment, this is a situation we’re comfortable in,” said Crowfoot.