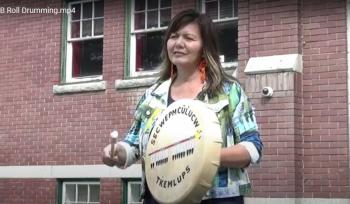 “The time was chosen as a way to honour those who are currently in Tk’emlúps caretakership.” —Chief Rosanne Casimer
By Shari Narine
Local Journalism Initiative Reporter
Windspeaker.com

Tk’emlúps te Secwépemc is inviting Indigenous peoples and non-Indigenous Canadians to drum a special honour song with them at 2:15 PDT on Sept. 30 in recognition of the Indigenous children lost to residential schools.

“This is the very first (national) day of Truth and Reconciliation, September 30. It is even more meaningful by the confirmation of the missing children … found in unmarked graves on the grounds,” said Tk’emlúps te Secwépemc Kupki7 Rosanne Casimer in a virtual news conference Sept. 17.

“Now that the voices of the missing children have been heard it is time to show them love, honour and respect.”

The time was chosen to correspond with the number of graves – 215 – located on the grounds of the former Kamloops Indian Residential School through ground penetrating radar (GPR) from May 21 to May 24. That work was directed by residential school survivors from the memories of what they witnessed while in the school.

“That number … made a ripple around the world at the end of May of this year about the truth of missing unmarked graves at the sites of former Indian residential schools as it revealed the truth of the historic mistreatment of Indigenous children. The time was chosen as a way to honour those who are currently in Tk’emlúps caretakership,” said Casimer.

With her voice breaking, Casimer said that other unmarked graves of other children lost to Indian residential schools around North America had also been confirmed since Tk’emlúps te Secwépemc began its GPR work.

“We are offering the honour song to unite us in the honouring and the healing of the missing Indian residential school children, their families and their home communities,” said Casimer.

Coronavirus pandemic measures curbed initial plans for mass gatherings to mark the day. Instead, Casimer is encouraging “a sense of unity” with people learning the song in their schools, workplaces, at home and then posting it on social media with the hashtag #DrumForTheChildren.

“It’s time to drum for the children,” said Casimer.

Tk’emlúps te Secwépemc has made the Secwepemc Honour Song available for learning on a dedicated web page:  https://tkemlups.ca/drum/

Bill C-5, which declared Sept. 30 as the National Day for Truth and Reconciliation, was fast tracked after the confirmation of the unmarked graves at Kamloops Indian Residential School. It received Royal Assent June 3 with unanimous passage through the Senate.

The bill responds to Call to Action 80 from the Truth and Reconciliation Commission, which explored the legacy of Indian residential schools. That call, one of many for the federal government, directs Canada “in collaboration with Aboriginal peoples, to establish, as a statutory holiday, a National Day for Truth and Reconciliation to honour Survivors, their families, and communities, and ensure that public commemoration of the history and legacy of residential schools remains a vital component of the reconciliation process.”

The TRC issued its Calls to Action in its final report in 2015.

The statutory holiday only covers those who work directly for the federal government or those federally regulated in the private sector, accounting for about six per cent of the work force.

The federal government left it up to provinces and territories to implement the statutory holiday and the result has been mixed.

British Columbia, Nova Scotia, Newfoundland and Labrador, Prince Edward Island and the three territories have recognized the holiday for provincial and territorial employees, but are leaving it up to the private sector to determine their own course.

Alberta, New Brunswick, Saskatchewan, and Quebec are not recognizing the holiday, although some are encouraging their citizens to reflect on ways to advance reconciliation. Alberta will be lowering flags on government buildings on Sept. 30.

Manitoba said Sept. 30 would not be a statutory holiday but would be recognized as a “day of observance.”