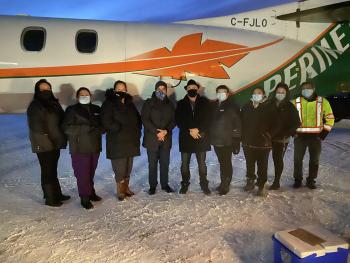 Our Elders “stepped up to be the first and to show that this is a good thing and to show that it’s safe and that people should be vaccinated.” — Pimicikamak Cree Nation Chief David Monias
By Sam Laskaris
Local Journalism Initiative Reporter
Windspeaker.com

Some First Nations communities in northern Manitoba are among the first to receive doses of a COVID-19 vaccine in the province.

A virtual news conference was hosted on Tuesday by the Manitoba Keewatinowi Okimakanak (MKO), which represents 26 First Nations in the province, to provide updates on the vaccine doses that had arrived in some remote communities.

“This is a turning point,” MKO Grand Chief Garrison Settee said. “It brings a sense of hope, a sense of optimism to our First Nations. This is what we advocated for that our people would be considered when the vaccines were being distributed nationwide. Our chiefs advocated to make sure that our people were considered and were not marginalized and now this is happening.”

Canada has approved both the Moderna and Pfizer vaccines for use across the country. Both federal and provincial governments identified First Nations people as being in a priority group to be among the first to receive the vaccines.

As of yesterday, seven First Nations in northern Manitoba had received some Moderna doses to distribute in their communities.

“It is a complex process, nevertheless we must continue to work so that people can have access to the vaccine that will ultimately save lives and bring change in the status quo,” Settee said.

“Since the pandemic began, we always knew that we were the most vulnerable,” he said. “Our First Nations were most at risks. As we move forward we want to see our people being well, being healthy and this is a part of that process.”

Anderson said community officials are doing their best to promote the benefits of vaccination to members in their First Nation.

“We’re finally seeing some light at the end of the tunnel here where the vaccination rollouts are occurring,” he said.

Constant added an educational process on the vaccines is also continuing in his community.

“The challenge for not only us as a people but, I guess, with society in general is that there is a lot of fear behind it,” he said.

Constant said many Indigenous people are questioning why they are among the first to receive doses.

“The fear is why are they giving it to First Nations people first,” he said. “Why do we have to be the first ones to try it? Well, because simply we are the most at risk.”

Constant said his First Nation had seven of its members test positive for the COVID-19 virus last September.

Contract tracing then found those seven individuals had been in contact with a total of 96 people in the First Nation, which has 470 members.

He said data accumulated over the past year found COVID is disproportionately impacting those in MKO communities.

Routledge said this information was not surprising since remote communities often lack the proper infrastructure to fight the pandemic.

He said data collected undoubtedly played a role in having government officials designate First Nations people into a priority group to receive the vaccine early on.

“It’s exciting to be at this point now where we’re starting to see that rollout,” Routledge said.

Those aged 70 and over, as well as health care staff, in the community were scheduled to receive the vaccine first.

Monias said some Elders who were not on the list to receive the vaccine on the first night that it was available showed up to see if they could get it.

“That was a good sign that people were coming forward because of all the negativity about the vaccine that they’re testing it on us and so forth,” Monias said. “That kind of removed all that notion that this is not a good thing.”

Monias was thrilled the majority of Elders in his community are very willing to receive the vaccine.

“Our Elders have always been our traditional teachers,” he said. “They teach us customs and they sacrificed a lot of stuff throughout our lives. And they stepped up to be the first and to show that this is a good thing and to show that it’s safe and that people should be vaccinated. That speaks volumes to them showing up.”

Monias said having a vaccine available now is encouraging as it signals the pandemic could indeed be ending at some point.