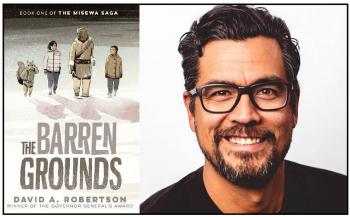 The Barren Grounds author David A. Robertson. The book is nominated for a 2020 Governor General Literary Award.

“If it gets the book into more kids’ hands, there’s a real value in that.” —author David A. Robertson
By Sam Laskaris
Local Journalism Initiative Reporter
Windspeaker.com

David A. Robertson, a member of Norway House Cree Nation in Manitoba, is a finalist for the 2020 Governor General Literary Award in the Young People’s Literature – Text category for his book titled The Barren Grounds.

In 2017 he was awarded the Governor General Literary Award in the Young People’s Literature – Illustrated Books category for his work When We Were Alone, illustrated by Julie Flett.

“The GG’s are pretty awesome,” Robertson said of the awards program, annually operated by the Canadian Council for the Arts. “It’s hard to win that award. I see the books I’m a finalist with and there’s so many really good writers.”

Robertson, who lives in Winnipeg, is one of five finalists in the category.

The four other books and finalists are Harvey Holds His Own by Colleen Nelson, The King of Jam Sandwiches by Eric Walters, Nevers by Sara Cassidy and Pine Island Home by Polly Horvath.

“It’s always surreal because there are so many good books published in a year,” Robertson said of the fact he is an award finalist once again.

Three individuals on the award program’s Peer Assessment Committee will be responsible for selecting which book will receive the 2020 award.

“I’ve been on juries before,” Robertson said. “I know how hard it is to choose.”

The Barren Grounds is a tale about two Indigenous youth, Morgan and Eli, who are forced away from their families and communities and end up together in a foster home in Winnipeg. They both struggle to fit into their new surroundings while missing their past lives.

But then, when they find a secret place in an attic bedroom, a portal opens up their lives to another reality, one that is embracing but also laced with dangerous conditions.

“It talks about some real important issues, social and world issues that are relevant today,” Robertson said.

He’s hoping his Governor General recognition will help spread word of his book.

“If it gets the book into more kids’ hands, there’s a real value in that,” he said.

The Barren Grounds is the first book in The Misewa Saga Series, written by Robertson. The second book in the series, The Great Bear, is also out now.

Misewa is the adventure land where Morgan and Eli end up when they go through the portal. They revisit Misewa in The Great Bear.

The books are for those in middle grades, ages eight to 12.

“I never write down to kids,” Robertson said.

He also said his books are intended for all young readers.

“I think there’s value for non-Indigenous kids reading a book with Indigenous characters but also for an Indigenous kid to read a book about somebody that looks likes him,” he said.

Though the pandemic has prevented him from travelling to various schools to share his book with children, Robertson said he has remained busy with virtual presentations that have allowed him to speak to more than 100 classrooms about his book.

The majority of these presentations have been staged across Canada and the United States. A few, however, have been overseas.

Robertson said the majority of these sessions have been staged for students that are not in Indigenous communities or schools.

“I haven’t seen a classroom yet where the kids don’t understand the themes,” he said.

The Governor General awards are one of the country’s oldest and most prestigious literary awards program. Awards were first handed out in 1936. For more than four decades only the winners for various categories were announced each year.

But since 1979 program officials have publicly released a list of award finalists. Winners have then been declared afterwards.

The 2020 awards campaign was cancelled last year because of the COVID-19 pandemic. Earlier this month, however, program officials did announce 70 finalists in 14 categories for their 2020 awards. All winners will be declared this coming Tuesday, June 1.

In their effort to catch up, program officials plan to also announce both the 2021 finalists and winners at some point this fall.