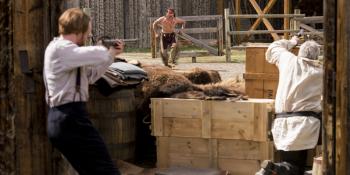 “I grew up with Blackfoot culture. That's the only culture I knew. But I never really heard much about these characters from our history being taught in our school and I always wondered why.” — Julian Black Antelope
By David Owen Rama
Local Journalism Initiative Reporter
Windspeaker.com

Many of us know that history is often skewed in favour of those who control the message, initially beginning with government accounts, historical texts and newspapers.

As the 20th century unfolded, new electronic forms of media such as film, radio, and television became incredibly useful tools to glorify the colonizer’s agenda while undermining the historical legacy of the First Nations people.

The demonization and stereotyping of Indigenous people disseminated in cowboy stories and popular western movies and TV shows became insidious.

Premiering on Feb. 13 on the Aboriginal Peoples Television Network (APTN), the 13-part docudrama is a labour of love for Black Antelope who has built himself an impressive career taking on acting roles in such productions as Penny Dreadful, Blackstone and Tribal.

“But I never really heard much about these characters from our history being taught in our school and I always wondered why. Because we live in such a rich part of western Canada and this is our Wild West out here, and yet very few people are aware of the Indigenous people that helped shape this area that we live in today,” he went on to explain.

Motivated by his struggles as an Indigenous actor to find roles that didn’t play into common stereotypes, Black Antelope spent a number of years writing, researching and pitching the Wild West through his production company Herd of 1 Media to potential backers until he finally received the green light from APTN.

“It was very important for me to develop something that young Indigenous people could say ‘hey, that’s one of us. Those are our superheroes. This is who I want to model myself after. I want to learn more about this guy’,” says Black Antelope.

Comprised of dramatic re-enactments, speaker testimony, animation and archive photos, Secret History: The Wild West “unearths” the past to bring much deserved attention to First Nations, Métis, and Inuit icons left out of the history books and challenge the accepted cannon of western stories.

Secret History: The Wild West will serve to tell the compelling stories of larger than life Indigenous figures from western history who achieved great accomplishments even in the face of harsh oppression and a genocidal initiative on the part of the colonists.

Told from an Indigenous perspective, the series is “anchored by testimony from direct descendants, spiritual leaders and tribal Elders of both Siksikaitsitapi (Blackfoot) and Nehiyaw-Pwat (Cree)” confederacies.

The series is built on a foundation of testimonials and accounts by numerous Indigenous Elders that include historian and spiritual leader Jerry Potts (Piikuni), artist, historian, and consultant Kerry Scott (Kainai), and Blackfoot language advisor and spiritual and cultural expert Rod Scout (Siksika).

Secret History: The Wild West was shot in English and Blackfoot language versions. When asked about the challenges of translating his teleplay from English into Blackfoot, Black Antelope admits that “it was definitely a challenge, but something well worth it because it was a way of archiving the language.

“We try to stay true to form as possible using very fluent speakers, very knowledgeable people,” explained Blackfoot consultant Scout, who grew up speaking the Blackfoot language taught to him by his grandparents. A Horn Society member and singer, Scout is a wellspring of traditional and historical insights who shares his vast knowledge generously in conversation.

As a lifelong knowledge keeper, Scout wants to make it clear that “a lot of us aren't smart Elders for nothing. Like we just get old and suddenly we get to be an Elder. We all paid our dues. We're members of societies and we own the bundles.”

Series speaker and consultant Kerry Scott met Black Antelope earlier in his career when the actor was working on his first television series, Into The West, a dramatic historical mini-series produced in 2005 by Steven Spielberg’s Dreamworks Studios.

Scott teases over the phone with intriguing stories about the complex and rich cultural history of the Blackfoot Confederacy that spans areas of southern Alberta, Saskatchewan and central Montana.

A residential school survivor, Scott worked extensively in rodeo until the age of 43 when he decided to return to school where he went back and covered requirements for both junior high and high school before enrolling in university where he earned both a Bachelor’s and a Master’s degree.

For his Master’s thesis Scott wrote a lengthy and detailed account of the Blackfoot culture viewed as a “living entity” called A Contemporary Winter Count in conjunction with a substantial series of his own paintings that interpret historical accounts contained in detailed sacred symbols.

While Scott says that if he gets around to it he probably has “at least 10 more books” in him, series advisor Scout cynically jokes that after being turned down for a teaching job back in the day because of a lack of academic credentials, he was forced to pursue his PhD just so he would be legitimately recognized to educate others about a culture that he was born and raised in.

Both Elders speak at length about nefarious genocidal tactics employed by the government, the clergy, and other intruders. They speak of the intentional destruction of the buffalo herds, biological warfare with the intentional spread of smallpox and tuberculosis, and the distribution of tainted alcohol, as well as disturbing accounts of segregation and oppression under the Pass System as dictated under the Indian Act. It was a system studied and adopted by Apartheid South Africa.

A retired police and security officer himself, Scout tells how Mounties would target Indigenous people and then also act as prosecuting attorneys at their trials, basically stacking the deck against them.

Scott exposes controversial evidence in the series providing historical proof of the intentional tainting of the alcohol supply with the powerful opioid Laudanum, which he says was used to kill and control Indigenous people, and mirrors the historically recognized trade in opium by the British to gain economic control over the people of China.

Not comfortable with taking on the role of the stiff serious documentary presenter, Black Antelope wavered when asked to step up as the narrator of the series. As he was already wearing numerous hats on the project, Black Antelope was seeking something inspiring that would allow him to show off his acting chops. That’s when he was hit with an appealing idea.

“And then I thought, ‘I know, I could be the Trickster. Because then I could morph into anything’,” said Black Antelope. “I’d be able to use my acting skills and I'd be playing characters. It brings out a mischievous element to it as well because it's almost like you're saying ‘hey, you know, you didn't want this history to be known, but we're going do it anyway’.”

“There's some stuff (in the series) that's going to probably make a non-Indigenous viewer uncomfortable,” the actor explained. “So the Trickster is there to let the pressure off a little bit and lighten the moment.”

As the original creator of Secret History: The Wild West, Black Antelope is thrilled that the show has been picked up for a second season as he and his team of consultants are excited to turn the focus next on important Indigenous women figures who played prominent roles in western history.

“My intent behind the show is to bridge those gaps in our history, and also to show our flaws. Because we're flawed too. We all have problems and this is what’s happened. So let's be aware of this so it never happens again and let's move forward collectively. And if we understand a little bit more about each other's cultures, I think there would be a little less animosity and division.”

To find out more about the series and showtimes go to www.aptn.ca/secrethistory