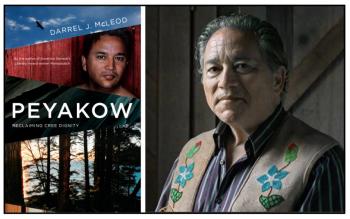 “We’re on a solid path. We’re coming through the dark times and we’re on a path of recovery and we’re going to be as strong as we once were, if not stronger…” —Author Darrel J. McLeod
By Shari Narine
Windspeaker.com Contributor

“I really want it to be a freeing-up experience, reading Peyakow, to help people realize the world can push you into really dark places sometimes, whether it’s your own life or the life of the people around you that you’re forced to witness. You’re forced to go into the darkness they’re living in just to be with them…But it is possible to come out of the darkness and survive and move back into a positive place,” said Darrel J. McLeod.  Peyakow, his second memoir, was officially released March 31.

There is no stronger example of that than McLeod’s own experience. His first memoir, Mamaskatch: A Cree Coming of Age, the traumatic accounting of his personal and family history, earned him the Governor General's Award for English-language non-fiction in 2018.

Peyakow: Reclaiming Cree Dignity is the second part of his memoir and focuses more on his professional life.

McLeod says he was lucky enough not to experience the “really amazing pressure” of winning the Governor General’s Award while he was writing his second memoir because the majority of the chapters in Peyakow is overflow from Mamaskatch. He had a two-book contract with publishing house Douglas & McIntyre, which allowed the writing of the memoirs to roll naturally from the first to the second. The second memoir had already been submitted to his editor before the Governor General’s Award was announced.

Peyakow begins with a chapter that took McLeod six months to research. The focus was on Treaty 8, which was signed in 1899, and is McLeod’s home territory in northern Alberta. Doing the research was an “incredible eye-opener,” he says, despite the fact he was a chief negotiator of land claims for the federal government and had to be familiar with the Treaty.

“We’ve been devastated,” said McLeod. “Colonization where I’m from was rapid and brutal and it devastated so many families.”

While the memoir opens on that dark part of history, it concludes with hope.

The final chapter in Peyakow is a powerful piece of writing that captures two dreams McLeod had and are presented as “magical realism.” In his dream world, McLeod is able to converse with his ancestors in Cree.  While McLeod is fluent in three languages, he is not fluent in Cree.

“I think the subconscious mind has ways of gifting us, giving us things that we yearn for buried so deeply. I think my ancestors visited me in my dreams and gifted me that of experiencing that phenomenon in my dream of all of us being able to speak Cree together, being able to communicate with each other in our original tongue which is so important. A language incorporates a worldview,” said McLeod.

He says when he woke up from his dreams he was “dumbfounded.”

“I felt elated because it gave me a vision, a way, a path forward for Nêhiyaw, for Cree people. We’re on a solid path. We’re coming through the dark times and we’re on a path of recovery and we’re going to be as strong as we once were, if not stronger, and we’re going to make a huge difference in the world,” he said.

McLeod says there is no doubt that winning the Governor General’s Award has heightened his profile.

“It’s a big landscape shift in terms of my writing being out there and being known. Mamaskatch was my first memoir and first publication under my own name. The fact that it was nominated for a mainstream award, for me, was really significant because a lot of people think if you’re an Indigenous writer nowadays, slam dunk, you’re going to be successful. But it’s not true. It’s still really hard,” he said.

McLeod has received validation from writing peers; from his Indigenous relatives and the Indigenous community as a whole; and from non-Indigenous people, including the handful he featured positively in Mamaskatch.

The coronavirus delayed the release of Peyakow. While McLeod has participated in a number of successful virtual events and has also taken to promoting his new memoir on Facebook, Twitter and Instagram, he says he’s anticipating the fall when he’s hoping to launch Peyakow in live events in Vancouver, Victoria, Edmonton and Calgary.

“It’s just because that human contact is so important for me, especially for a book with a message like this one. It’s really important to be there in person I think,” he said.

McLeod’s third book has taken him in a new direction. This one is a fiction “based on some lived experience, but it’s totally fictionalized.” He says he’s enjoying the freedom writing fiction allows, but he admits there are the challenges of ensuring that his characters are compelling and the plot engaging.

“But I’m really thrilled with it. I’m super happy with it,” he said.

The first draft has been sent to advanced readers. McLeod’s agent will shop the novel around to publishers.