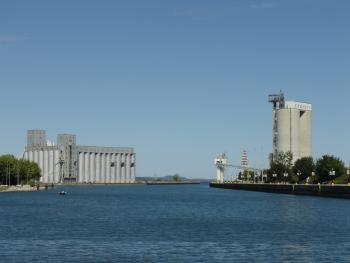 The Saugeen Ojibway Nation (SON) Environment Office today released a report that finds the Owen Sound Harbour contamination is putting the fishery, the whitefish and the people at risk.

“The story of this report is that pollution in the harbour is high and extensive and bad for the health of fish and fish stocks, and its sediment can harm people if they are exposed to it,” reads a press statement from the environment office.

“Since 2000, Canada has basically been seeking to divest itself from the Owen Sound Harbour,” said Doran Ritchie in an interview on Open Line with Bill Murdoch on 560 CFOS. Ritchie is the SON Environment Office Resources Manager.

Canada’s divesture intention has concerned the Saugeen Ojibway Nation, because of an Aboriginal title claim of the area, the potential transfer of lands, and the harbour contamination effects on fishing rights.

Since then, the (SON) has made the case to be consulted on the health of the harbour, but “Canada has been very evasive, unresponsive, to various attempts of negotiation,” Ritchie said. So SON has been using its own resources to make a study of the harbour.

The results from sampling in the harbour show that there is:

The chiefs and councils of the Saugeen Ojibway Nation are concerned with the integrity of the environment of their traditional territories, and want to ensure that projects are not incompatible with the use that the Chippewas of Nawash Unceded First Nation and the Chippewas of Saugeen would make of the land.

The report summary says community knowledge indicates there are locations in and around the harbour that are important habitat for lake whitefish. There are multiple traditional camps and former fishing areas that also suggest community members may frequent the area that is contaminated and may also be at risk of exposure to “ecotoxicological hazards”.

Experiments with fish showed swollen yolk sacs (i.e. yolk sac edema) that developed in embryos and fry of fish species that were exposed to organic contaminants isolated from the water column in Owen Sound inner harbour.

There were also elevated levels of stress (i.e. oxidative stress) in juvenile lake whitefish that were exposed to water that was filtered through sediment from Owen Sound harbour, mimicking sediment disturbances, reads the report.

The report concludes that disturbing the contaminated sediments in the harbour would increase the risks of ecotoxicological effects “and should not be conducted without a full evaluation of those risks by qualified experts.” There has been talk of revitalizing the usage of the harbour by dredging.

The report was conducted in collaboration with Trent University over three years.

Phase I of the project addressed the information gaps identified in a report by Dillon Consulting (2010) on contaminants in the harbour, including an evaluation of contaminant levels in the water column above the sediments. This study found that the harbour was “highly contaminated,” said Ritchie.

Phase II of the project focused on the extent of contamination of the sediments and addressed the need to evaluate the potential ecotoxicological impacts of disturbing the sediments.

Workshops were held with the nations’ community members, during which the study results were shared and individuals were asked to share their ecological and cultural knowledge (“traditional knowledge”) about the region and their concerns related to contamination of Owen Sound Bay.

Today marks the final report submission, though Trent University will continue to work on the remaining aspects of the study, keeping the Saugeen Ojibway Nation apprised of results for future decision making.

The issues have lingered for two decades now without substantive consultations or discussions by government with SON, or a seat at the table for SON on their concerns about the divestiture of the harbour or the contamination, said Ritchie

The nation’s environment office is calling for more evaluation of the area.

(Listen to the Bill Murdoch interview. The first half of the cast is on the upcoming SON conference on Free, Prior and Informed Consent scheduled for next week https://empoweringourfuture.ca/, and the second half of the podcast at about the 30 minute mark is on the harbour report at https://www.bayshorebroadcasting.ca/downloads/audio/MurdochSONOct19.mp3