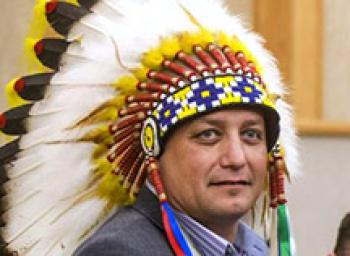 “The City has a tremendous amount of purchasing power, and with that comes a tremendous potential to do things…” —Saskatoon Mayor Charlie Clark
By Shari Narine
Windspeaker.com Contributor

The City of Saskatoon has started to award contracts for the delivery of goods and services to companies with an Indigenous component.

Saskatoon revised its procurement policy last year to “incorporate the City’s commitment to procure Goods, Services and Construction from Suppliers that encourage diversity, including Indigenous Suppliers.”

According to the policy, an Indigenous supplier is a business or enterprise that is more than 50 per cent owned, managed and controlled by Indigenous people.

“We’re sure encouraged by the fact that they are starting somewhere. And that’s a good sign,” said Saskatoon Tribal Council Chief Mark Arcand.

“We like to see that because there are a lot of opportunities to go around. So I think an initial step is a big step towards something bigger. It might take us some time to get there, but that’s the vision.”

Arcand points to an Indigenous procurement policy that has been adopted by Nutrien, an international company operating a potash facility just outside of Saskatoon. Nutrien is awarding 30 per cent of its procurement contracts for Aboriginal engagement. That’s the mark he would like to see the city hit.

It was with that in mind that discussions took place between Arcand and the city.

“We have a good partnership with City of Saskatoon. We approached them and asked them to consider this opportunity because other organizations were doing it. At the end of the day, it’s about mutual opportunities to work together,” he said.

STC was among the Indigenous organizations that Saskatoon consulted with. Consultation included a round table hosted by the city in October with leadership in Indigenous business and economic development and the wider business community.

“When I ran for mayor, I committed to revamping our procurement practices to make them more in line with the province’s Priority Saskatchewan framework, to partnering with Indigenous governments and institutions to create employment and training opportunities, and to do my part in supporting local Indigenous economies,” said Saskatoon Mayor Charlie Clark in his November 2018 blog.

“The City has a tremendous amount of purchasing power, and with that comes a tremendous potential to do things differently and have a positive effect for the broader community.”

“This is very important and I think we should ask other cities to do the same because if one city is doing it, then how come the other ones can’t? It’s asking them, encouraging them to work together with First Nation organizations so everybody can have a quality of life,” he said.

The Canadian Council for Aboriginal Businesses is pushing for the federal government to implement a change that would see five per cent of its procurement dollars dedicated to Aboriginal businesses by 2024.

A report released by the CCAB earlier this month, and supported by Crown-Indigenous Relations and Northern Affairs Canada, noted that while the Indigenous economy contributes $32 billion annually to Canada’s GDP, the federal government gave less than one-third of one per cent of its procurement contracts to Indigenous businesses.

CCAB’s report, Industry and Inclusion: An Analysis of Indigenous Potential in Federal Supply Chains, indicates that there is “no shortage in the capacity of Indigenous suppliers to meet a five per cent target… (and) in fact, Indigenous businesses have the capacity to supply 24.2 per cent of the goods and services purchased by the federal government annually ….”

There are now over 50,000 Aboriginal-owned businesses in Canada.

It’s in that spirit that the STC and Whitecap Dakota First Nation will be hosting a conference looking at the Truth and Reconciliation Commission’s call to action number 92, which addresses businesses and says, in part, “Ensure that Aboriginal peoples have equitable access to jobs, training, and education opportunities in the corporate sector, and that Aboriginal communities gain long-term sustainable benefits from economic development projects.”

“It’s important that First Nations be part of the economy. By doing that we can really make a difference so there’s more investments into people having quality jobs than having people in a child welfare system or incarceration system,” he said.