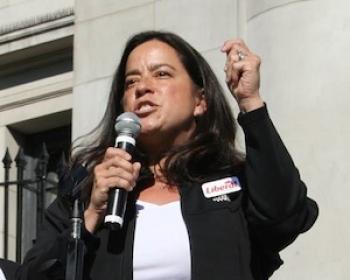 "I don’t think denying Indigenous people fundamental rights in this country is something that is unworkable. I think it’s workable and that’s where I’m going.” ~ NDP MP Romeo Saganash on UNDRIP and his Bill C-262.

Romeo Saganash is adamant that Canadian laws can be “in harmony” with the United Nations Declaration on the Rights of Indigenous Peoples. So says a private member’s bill that received first reading April 21.

“There is nothing ‘unworkable’ about that,” said Saganash, using the word spoken by Justice Minister Jody Wilson-Raybould, who said UNDRIP cannot be adopted as Canadian law.

On July 12, Wilson-Raybould addressed the Assembly of First Nations at the annual general assembly and told chiefs and delegates, “….Simplistic approaches, such as adopting the UNDRIP as being Canadian law are unworkable and, respectfully, a political distraction to undertaking the hard work required to actually implement it.”

Saganash suggests that Wilson-Raybould “go back to reading” the Calls to Action presented by the Truth and Reconciliation Commission. In call 43, the TRC directs all levels of government to fully adopt and implement UNDRIP “as the framework for reconciliation” and in call 44, the TRC directs the federal government to “develop a national action plan, strategies, and other concrete measures to achieve the goals” of UNDRIP.

The Trudeau government pledged to implement all 94 Calls to Action from the TRC.

He pointed out that the opponents of the Charter of Rights and Freedoms, which was created in 1982, also said it was unworkable.

“Here we have the Indigenous Member of Parliament, the Attorney General of Canada saying the same thing as the opponents of the Charter of Rights and Freedoms back in the day,” said Saganash. “What is unworkable, in my mind, is the continuing denial of fundamental rights to Indigenous people of this country.”

In her statement to the AFN, Wilson-Raybould suggested, “… the way the UNDRIP will get implemented in Canada will be through a mixture of legislation, policy and action initiated and taken by Indigenous Nations themselves.”

Saganash says his bill calls for implementation of the UNDRIP, which could be carried out through policy and action, but he stresses the need for the UNDRIP first to become Canadian law.

“I don’t see how that’s unworkable in this country,” he said.

Saganash says he has asked the government during numerous question periods to support his bill and has received no answer.

“I got the answer yesterday,” he said, adding that was what he was expecting to hear considering the lack of response in the House of Commons.

Saganash says he is concerned that the standing ovation Wilson-Raybould received after her address at the assembly may be viewed by her as acceptance that the UNDRIP does not need to become Canadian law.

“Ultimately,” said Wilson-Raybould, “the UNDRIP will be articulated through the constitutional framework of section 35.”

But Saganash says that isn’t good enough. Millions of dollars have been spent in court addressing what Aboriginal rights mean in the Constitution.

“UNDRIP clarifies that and this is what my bill is going to do, clarify what those rights are and they’re contained in the United Nations Declaration on the Rights of Indigenous Peoples,” he said.

“The Minister of Indigenous Affairs Canada committed to working with First Nations as full partners on the adoption of the UN Declaration,” said AFN National Chief Perry Bellegarde in an email response to Windspeaker. “As full partners we clearly have a lot to discuss.

“First Nations and Chiefs in Assembly have been clear that legislation is an option to ensure the adoption and implementation of the UN Declaration."