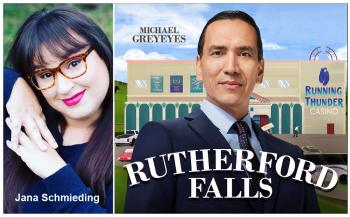 A new television comedy series that counts Indigenous people among its starring cast and writing team is doing more than bringing the funny.

Rutherford Falls, which debuts with back-to-back episodes on Showcase this Thursday (April 29), springs into action over the fate of the statue of town founder “Big Larry” Rutherford and draws into question the larger concept of historical narratives.

Historical statues and their placement in modern society has been an ongoing discussion across North America in the past year as demonstrators have toppled and vandalized statues. Various levels of governments have made decisions to remove and relocate statues.

“The origin of the plot came from Mike Schur and Ed Helm having a discussion about history and … why we dig our heels in even when historical truths are sort of dismantled or retold or reshaped,” said Jana Schmieding.

Schmieding, from the Cheyenne River Lakota Sioux, is one of the lead actors in the series, as well as one of the five Indigenous writers of the show.

“Our job as writers was to take that original concept and to build upon it and bring our own experiences in and certainly we live in a world where not only statues are being taken down across many lands, statues of colonists and statues of racist white men…

“I think there’s commentary that is perhaps meaningful and hard-hitting to some people, but I don’t think it’s anything new that people haven’t heard before. And certainly if they haven’t heard it before I’m ready for them to hear it now. I think it’s an okay time for Native people to have some jokes not necessarily about us for the first time,” said Schmieding.

Schmieding’s character Reagan Wells lives between the two worlds of Rutherford Falls, where her best friend is Nathan (played by Helms), the lone remaining Rutherford living in the town, and she works in the one-room cultural centre, located in Running Thunder casino in the neighbouring reservation of the Minishanka.

“I felt like I was learning a lot from Michael and he is just an incredible friend and mentor to me as a performer,” said Schmieding.  “He’s been an amazing collaborator.”

Greyeyes is excited for Rutherford Falls to premiere “north of 60,” he said on his Twitter page. One more sleep, Canada, he wrote. “Not sure if my cousins are on here (FB for sure) so big shout out to all of them back home on Treaty 6,” adding “Hope you dig it!!!”

Schmieding hopes the 10-episode series will see the viewers grow like the characters do. In the first episode Nathan tells Reagan that they both “get it” and they both understand that the world is black and white, with right and wrong being obvious. However, says Schmieding, Reagan doesn’t “get it.”

“It sort of unfolds over the course of the season that Nathan maybe doesn’t, in fact, get it at all; that nobody gets it and that actually this binary that we’re trying to impose upon ourselves, good, bad, right, wrong, is true, untrue, is actually more fluid and we can be moved … along the spectrum of truth.

“I do hope that people understand, see within themselves this same journey that the characters are going on which is to say that we all have faults. We all have shortcomings. And we as humans and as adults are also able to learn and to grow and to change,” said Schmieding.

Rutherford Falls has a strong pedigree with co-creators and executive producers who have experienced considerable success on TV. Schur has among his credits The Good Place and Parks and Recreation; Helms has The Office; and Ornelas has Brooklyn Nine-Nine and Superstore. Like these other comedies, Rutherford Falls has no laugh track.

While the fictional town of Rutherford Falls and neighbouring reservation are located in New York, the show was filmed in the Paramount backlot in Los Angeles. Production was initially delayed due to the coronavirus pandemic.