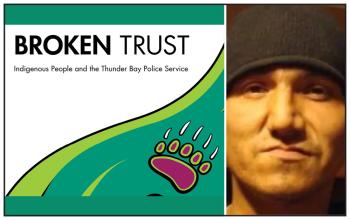 The cover of the Broken Trust report with a photo of the late Stacey DeBungee.

“It would be no different than if Mr. McNeilly was here testifying… I don’t have to accept it as fact. That’s my job. It’s to decipher what I accept and what I don’t accept.” —Greg Walton, retired Ontario Provincial Police superintendent, adjudicating the hearing
By Shari Narine
Local Journalism Initiative Reporter
Windspeaker.com

The Broken Trust: Indigenous People and the Thunder Bay Police Service (TBPS) report will not be considered as a statement of fact in the disciplinary hearing of two TBPS officers charged with neglect of duty and discreditable conduct in the five-month long investigation into Stacey DeBungee’s death seven years ago.

Retired Ontario Provincial Police superintendent Greg Walton, adjudicating the hearing which began May 30, said while he would accept the December 2018 report undertaken by Gerry McNeilly, an independent police review director, as “relevant to these proceedings…I don’t think it would be proper for me to accept it, that every word in here I have to accept as fact.”

His decision followed despite an argument from Asha James, legal counsel for DeBungee’s brother Brad and former Rainy River First Nation Chief Jim Leonard, that the report showed the systemic racism that permeated the TBPS.

She pointed out that the report resulted from a complaint issued by Brad DeBungee in March 2016.

“Indigenous leaders and community members told me that TBPS investigations of Indigenous deaths and other interactions with police devalued Indigenous lives, reflected differential treatment and were based on racist attitudes and stereotypical preconceptions about Indigenous people,” wrote McNeilly.

He initiated the system review of the TBPS in November 2016, noting “that the questions raised by Indigenous people in 1993 remained as valid as they did some 25 years ago, was deeply troubling, and demanded an urgent and comprehensive response.”

James and prosecutor Joel Dubois both asked Walton to include the Broken Trust report, with the exception of the pages that directly referred to the investigation surrounding DeBungee’s circumstances.

McNeilly’s report stated, “Even the evidence of Mr. DeBungee’s intoxication did not point only to an accidental drowning, nor did it exclude, without proper investigation, foul play contributing to how he ended up in the river. The police were not justified in adopting an approach which too readily assumed that intoxication explained a sudden death, or warranted a diminished level of diligence in investigating what happened.”

DeBungee, 41 years old and a member of Rainy River First Nation, was found dead in the McIntyre River in Thunder Bay on Oct. 19, 2015.

Staff Sgt. Shawn Harrison and Detective Shawn Whipple, who were involved in the investigation from Oct. 19, 2015 to March 18, 2016, have been charged under the Police Services Act. Harrison has pleaded guilty to neglect of duty, but not guilty to discreditable conduct. Whipple pleaded not guilty to both charges.

In an agreed statement of facts, Harrison had determined within a few hours there were no signs of foul play and approved a press release saying DeBungee’s death wasn’t suspicious, though a witness had told officers he saw two Indigenous men fighting at the riverbank the night before the body was discovered, without conducting an investigation or identifying the body, and before an autopsy was performed.

David Butt, legal counsel for Harrison and Whipple, said including the Broken Trust report as a document of fact was “getting into dangerous waters.”

“That report is a report on the author’s finding on systemic racism, a key issue in this case. An issue, a distinction, that if we do not recognize will be unjust to my clients. Is it that there is a fundamental distinction between systemic racism, that is, racist outcomes imposed on an identifiable group as a result of systems that are put in place, and racist acts by individuals? Maintaining strict adherence to the conceptual distinction between those two is essential if my clients are going to be fairly treated by this tribunal,” said Butt.

He pointed out that neither of his clients had the opportunity to respond to, have input in or participate in any manner in McNeilly’s procedure.

However, written submissions from the TBPS were accepted by McNeilly’s system review team, which also conducted more than 80 meetings with community organizations, Indigenous leaders and organizations, service providers and the general public. It considered “relevant recommendations” from previous reports and undertook an independent examination of 37 individual cases of mostly Indigenous deaths investigated by the TBPS.

The report took two years to complete and concludes that there are “serious deficiencies in how TBPS has investigated Indigenous missing persons and sudden or unexpected deaths.”

Butt said the report should appear as a Book of Authorities or something that “the parties may wish to make persuasive arguments relying on (as) an authority.”

He said the report was a “thought” piece and could serve to persuade Walton but could not be applicable as facts in the hearing.

“It would be no different than if Mr. McNeilly was here testifying… I don’t have to accept it as fact. That’s my job. It’s to decipher what I accept and what I don’t accept,” he said.

While Hay held that “our system in general is slanted,” he said he saw no direct racism and would not agree that bias impacted investigations.

When James attempted to question Hay on a 2012 “joke” e-mail news release entitled “Fresh Breath Killer Captured!!!,” Walton shut her down after Butt objected that the incident did not involve his clients.

“If we want to revisit episodes of unfortunate behaviour by other officers we could be here until the cows come home. My clients are on trial here. This is about what they did and their state of mind at the time they did it. I cannot see how this contributes to determination of the issues in front of us. And therefore I think, frankly, it’s a waste of this tribunal’s time,” said Butt.

The 2012 news release referred to the murder of Adam Yellowhead, whose body was found in an area frequented by people who use mouthwash to get drunk.

Response by the TBPS that the internal email did not carry racist overtones resulted in three Ontario First Nations filing a human rights complaint against the TBPS.

“How is this relevant?” Walton asked James after Hay had been directed to leave the room in order for the discussion to take place.

The news release and incident showed prejudicial beliefs and stereotypes, she said, and she could “infer that that was a factor in how the (DeBungee) investigation was conducted.”

Walton said Hay had already indicated that racism existed and questioning Hay on the 2012 email did not “further our position here.”

Both Dubois and James said criminal record checks were not routine in this type of hearing and called Butt’s request a “fishing expedition.”

Walter did not order the record checks.

The hearing is scheduled to continue until June 17.

Staff Sgt. Susan Kaucharik was also charged with neglect of duty under the Police Services Act but retired before the disciplinary hearing took place.