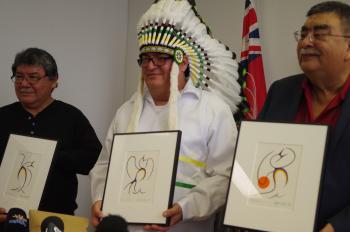 "It’s significant that these schools are being built in some of the most remote and hard to reach First Nations in the country, and when they are completed, they will mean a whole new way of education for many students.” —Jane Philpott, federal minister of Indigenous Services
By Marjorie Roden

It was the largest infrastructure contracts ever awarded to First Nations in partnership with Indigenous Services Canada.

In addition to the four schools, an existing school on the Bunibonibee Cree Nation will receive major renovations.

“Each school has been specifically designed with the participation of community members who know exactly what they need and what the reality should look like,” Philpott said, adding “In this day of modern technology, they’ve actually used virtual reality to help design the schools so that they will know what they will look like on the inside.

“The schools have been designed with the needs, the traditions, the perspectives of First Nations peoples in mind. It’s significant that these schools are being built in some of the most remote and hard to reach First Nations in the country, and when they are completed, they will mean a whole new way of education for many students.”

The schools are to open in 2020 for 2,600 students making them able to stay in their home communities from kindergarten to Grade 12.

“They will not have to leave their parents, their grandparents, their aunts and uncles.. They will be able to complete their high school education surrounded by their land,” Phillpot said.

“The education that will be delivered in these schools will be grounded in First Nations’ ancestral and cultural knowledge.”

Important and relevant literature written by First Nations’ writers also had a personal influence on Philpott, she said.

“One of the most moving books that I’ve read in the past year is a book called “Up Ghost River” by Edmund Metatawabin, who is now a member of the Order of Canada; a great elder statesperson in this country. He describes in his book what it was like to leave home and go to St. Anne’s Residential School….

In an inviting contrast, Philpott says the new schools will “be warm and bright. They will take into account traditional ways of building. They will be welcoming spaces for students, where they will feel at home, proud of their culture and their heritage.”

Chief Timothy Muskego of the Bunibonibee Cree Nation said “We’re hoping the old building that the children are currently using will be used as a satellite training centre from one of the universities, such as University College of the North. We’ve partnered with the Assiniboine Community College for training purposes.”

Grand Chief Dr. Arlen Dumas of the Assembly of Manitoba Chiefs said “I want to commend the minister and the (Federal) government for choosing to invest in the people of the North, the remote and isolated communities. I want to commend the chiefs for all their efforts because there’s actually a whole variety of things that are actually working in concert.

“The Chiefs have prioritized education on different levels, and this investment actually compliments and will benefit all of those residual things that will become important. Never before have we had so many First Nations’ people who are qualified, certified educators. Never before have we had construction companies to the level that we do, so I want to comment the government for this timely investment. It is going to pay dividends for generations to come, and that all of these things are actually connected and interwoven in many ways.”

Construction on all of the schools is expected to start in the spring of 2019.