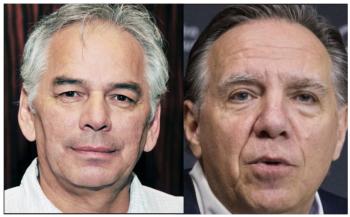 “This plan we see, there are gestures, not complicated, that can be put in action tomorrow.” — Chief Ghislain Picard
By Shari Narine
Local Journalism Initiative Reporter
Windspeaker.com

The recent repulsive treatment and tragic death of a First Nations patient at a Quebec hospital has underscored the urgent need to implement the Action Plan on Racism and Discrimination unveiled by the Assembly of First Nations Quebec-Labrador (AFNQL) on Tuesday morning.

In his opening remarks, AFNQL Chief Ghislain Picard referenced the “suspect circumstances” of the death of Joyce Echaquan, an Atikamekw woman, in Joliette Hospital on Sept. 28.

Echaquan, 37, tied to her bed and pleading for help, captured video on her cell phone, broadcast live on Facebook, of her treatment by hospital staff.  Before she died Echaquan was called stupid, good only for sex, and told she was better off dead.

Picard said a coroner’s report on Echaquan’s death is only one part of the accountability measures that needs to take place.

“A coroner’s report shouldn’t be an opportunity to escape… because what a coroner’s report won’t change is the racist attitude of the staff in the hospital which already is well documented,” he said.

AFNQL’s plan to fight racism and discrimination outlines 141 proposed interventions, which include recommendations for institutions, such as hospitals, which fall under the jurisdiction of the provincial government.

“It’s for the government to get to be inspired from the action plan we are offering today,” said Picard.

In June, Quebec Premier Francois Legault announced the formation of an “anti-racism task force.” The task force was not mandated to hold public consultations or to get input from First Nations.

The creation of the task force followed Legault’s statement that systemic racism did not exist in Quebec.

AFNQL responded with its own action plan, which involved combing through reports that already contained recommendations on how to deal with racism.

Prior to unveiling the report, the AFNQL commissioned Leger Marketing to poll non-Indigenous Quebecers on the topic of racism. With just over 1,000 people responding to the survey in July, nine out of 10 respondents indicated they believed First Nations people experienced racism in their province.

While the majority of respondents felt that racism was institutional and not individual, the AFNQL action plan calls on individuals to take action.

“We want to create alliance in the Quebec society and to offer means of action to all citizens,” said Picard. “We want … friendship between people.”

“The plan leaves ample room for bridging initiatives that are already in place and can be further strengthened. It is in this area, between neighbors, partners and allies, that everything is at stake,” says the action plan.

It outlines 20 ways in which Quebec citizens can take “concrete actions” to fight racism and discrimination.

The plan also outlines ways in which organizations and groups can carry out awareness campaigns, create space for sharing Indigenous experiences, and value Indigenous languages and culture.

Educational institutions, municipalities, policing and justice, business and the economic community, and media are also singled out for actions they can take to engage with First Nations.

Picard would not comment on what actions would be taken by the province or what he expected would come from Legault’s anti-racism task force.

“This plan we see, there are gestures, not complicated, that can be put in action tomorrow,” he said.

Legault’s task force is expected to release its findings and plan in October 2021.