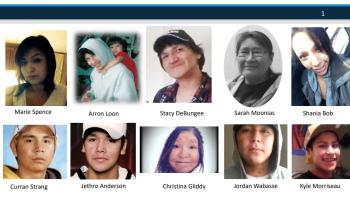 The Office of the Independent Police Review Director said nine Indigenous peoples' deaths had to be re-investigated because Thunder Bay Police Services' investigations were inadequate.

“The inescapable conclusion as of today is that no lessons have been learned and that all of the problems that beset the initial investigation of these deaths continues through to today.” — Caitlyn Kasper of Aboriginal Legal Services
By Shari Narine
Local Journalism Initiative Reporter
Windspeaker.com

Families for loved ones whose deaths in Thunder Bay, Ont. were singled out for re-investigation by police are still waiting for the promised transparency of the process and answers.

It’s been two-and-a-half years since the Office of the Independent Police Review Director (OIPRD) said the work needed to be done by an investigative team that consisted of more than the Thunder Bay Police Service (TBPS).

“Right now my heart is still heavy…. We all want answers and justice to be done to everyone and proper investigations to be done right away,” said Beulah Wabasse.

Her oldest grandson Jordan Wabasse died May 10, 2011 at the age of 15. His was one of the re-investigations of sudden deaths demanded by the OIPRD in the report “Broken Trust”, released in December 2018.

The “Broken Trust” report was the result of action taken by Stacy DeBungee’s family, with the support of leaders from Nishnawbe Aski Nation, Treaty #3, and Rainy River First Nation, after DeBungee’s body was found in the McIntyre River on Oct. 19, 2015.

TBPS quickly deemed his death “non-criminal.” The family hired a private investigator who determined that TBPS’s investigation was inadequate. The family and community members also leveled criticism against TBPS for “racist attitudes and stereotypical preconceptions about Indigenous peoples.”

The OIPRD reviewed 37 Indigenous deaths, “partially driven by random sampling”, and selected nine cases that were “so problematic” that they had to be re-investigated.

The report contained 44 recommendations, which included the creation of a multi-discipline investigation team to establish a protocol for determining whether other TBPS sudden deaths needed to be re-investigated and whether DeBungee’s death should be re-investigated.

Brad DeBungee, Stacy Debungee’s brother, said he has had no contact with TBPS Chief Sylvie Hauth since he spoke to her when the “Broken Trust” report came out, and she assured him the police would be “honest and open” with him.

“It’s like they’re playing a game… How’re you supposed to trust a system like that?” he said.

Falconer, who is legal counsel for the DeBungee family, called out Hauth for her role in the re-investigations.

“It is not acceptable that the chief of the Thunder Bay Police Service, a service directly implicated in sheer incompetence in devaluating the lives of Indigenous people, would have a controlling hand in the issuance of this report,” said Falconer, referring to a report due out this summer regarding the re-investigations.

Falconer added that his queries about whether Hauth and the TBPS lawyer have recused themselves from the “content and issuance” of the upcoming report have gone unanswered, which leads Falconer to believe that both are still involved.

The three-tiered oversight framework outlined in “Broken Trust”, which was established to oversee the re-investigations, includes Hauth as a member of the executive governance committee.

Hauth joined the TBPS in 1993. In June 2017, she became acting police chief and was appointed chief of police in December 2018.

Falconer is also calling for TBPS to “be shut down and a service accountable beyond the borders of Thunder Bay brought in.”

“Indigenous people will remain in danger, in jeopardy, as long as the Thunder Bay police are responsible for protecting their safety. We must bring this to an end,” he said.

Legal counsel Caitlyn Kasper of Aboriginal Legal Services (ALS), which represents the families of Jordan Wabasse, Jethro Anderson and Kyle Morrisseau, said that the new investigative team had been “inadequate and ineffective” and demonstrated a lack of respect in dealing with the families.

She also pointed out that only one of the families had spoken to the investigative team, yet the report on the re-investigations is close to being completed.

“This is the crisis of trust that affects the relationship between Indigenous people and the Thunder Bay police,” she said. “The inescapable conclusion as of today is that no lessons have been learned and that all of the problems that beset the initial investigation of these deaths continues through to today.”

Wabasse, Anderson (15) and Morrisseau (17) were part of the Coroner’s Inquest into the deaths of seven First Nations youth, which concluded in 2016. All the youth had moved to Thunder Bay to attend high school.

“Broken Trust” also called for the re-investigation into Curran Strang’s death, another young person included in the 2016 coroner’s inquest.

Anderson, who died in 2000, is the oldest case to be re-investigated.

“We owe it to them to look for justice and we will continue to seek justice for them and to ensure that we change the systems, the system that does not treat us fairly," said Achneepineskum, aunt of Marie Spence and great aunt of Arron Loon, whose deaths were also called to be re-investigated.

“That’s what needs to happen and we require transparency and accountability for that.”

Also named for a re-investigation into their deaths were Sarah Moonias, Shania Bob and Christina Giddy.