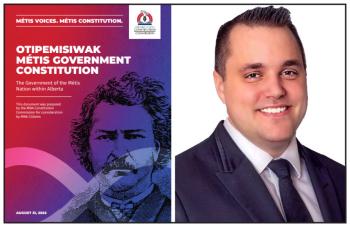 “There’s a campaign of people, for their own reasons, (who) want to foment dissension and fear around this process.” — Garrett Tomlinson, MNA senior director of self-government
By Shari Narine
Local Journalism Initiative Reporter
Windspeaker.com

As month-long voting for the Métis Nation of Alberta’s constitution for self-government sets to wind down at the end of November, opposition against ratification remains strong both from within the MNA and from those groups that have split off.

“There’s a campaign of people, for their own reasons, (who) want to foment dissension and fear around this process. We’ve seen that in every self-government process across the country that I’ve ever worked on where these conversations arise,” he said.

However, opposition to the Otipemisiwak Métis Government Constitution ramped up when voting began Nov. 1.

Opposition has been in place since shortly after the MNA signed the Métis Government Recognition and Self-Government Agreement with the federal government in 2019.

On Nov. 4, that group was joined by two other northern Métis associations, which also broke ties with the MNA, in sending a 10-page letter to Crown-Indigenous Relations Minister Marc Miller outlining their “shared concerns” for what they called a “power grab” by the MNA.

Quoting a section from the MNA constitution, they said, “While the MNA aspires to ‘stand as the political representative of all Métis in Alberta’…they do not and cannot represent all Métis.”

Tomlinson says the constitution is clear that the Métis Nation within Alberta (a shift from the Métis Nation of Alberta) “has an obligation to represent its 56,000 citizens…(and) it’s certainly not suggested that we represent anyone who chooses to take a different path towards their self-determination or self-government.”

However, concerns are not limited to outside of the ranks.

Presidents from the Grande Cache (Mountain Métis) and Lethbridge and area locals sent a letter to Prime Minister Justin Trudeau on Oct. 31 after claiming to have gotten no response from communications addressed to Minister Miller.

While Adam Browning (Lethbridge) and Alvin Findlay (Mountain Métis) make it clear they support self-government and a constitution, they stated the MNA process was “void of meaningful consultation.”

They also questioned the ratification process, pointing out there is “no stated participatory requirement regarding the proportion of MNA members who must vote….”

With 50,000 of MNA’s 56,000-plus citizens 16 years of age or older eligible to vote, no threshold has been set as to what percentage of voters must cast ballots for what is being billed by the MNA itself as the “largest ratification vote in Canadian history for an Indigenous Nation.”

Ratification for the constitution involves a straight 50 per cent plus one of votes cast for approval.

The lack of a citizen threshold figure does not concern Tomlinson.

“By making sure everybody has the opportunity to engage, I think we’re confident that turnout will be resoundingly indicative of support for the process and the results will go from there,” he said, noting that citizens can vote in person, by mail or online.

Tomlinson would not expand on what “resoundingly indicative” would look like.

“I don’t want to get too far into the numbers game. What we would like to see is a significant uptake in participation far beyond what we’ve seen in general elections, for example,” he said.

Since ratification voting began Nov. 1, Tomlinson added, “thousands of MNA citizens have voted…The MNA is on track to have the largest number of Métis citizens to ever ratify a constitution.”

Constitutions were ratified by the Métis Nation-Saskatchewan in 1993 and the Métis Nation BC in 2003, said Tomlinson, but he did not offer numbers for either ratification vote.

“I’m comfortable the turn out is going to be quite high…That we’re going to see specifically a result that tells us, ‘Hey look, we definitely have a result that we can be confident in that’s an expression of the Nation,’” said Tomlinson.

The MNA’s ratification vote guidelines do set out a course of action that can be taken by the chief electoral officer (CEO) if in his opinion the vote hasn’t met a “sufficient threshold for participation.” Once again, there is no definition for that threshold.

According to the guidelines, the CEO may “pause the voting event” within 24 hours of the last voting day (Nov. 30) and then consult with the Provincial Council to determine if additional polling days should be added or the ratification vote extended.

The CEO and Provincial Council can also determine “other actions necessary and appropriate in order to ensure the timely and safe delivery and conclusion of the Ratification Vote.”

Browning and Findlay have asked Trudeau “in that inevitable circumstance of ratification, call for a moratorium on the implementation of any Constitution until there has been proper consultation with all of the collectives affected by it.”

Windspeaker.com reached out to Miller’s office with a list of questions.

In an email response, spokesperson Nicolas Moquin confirmed the department was aware of the ongoing ratification vote.

“An Indigenous constitution is an internal matter between the Indigenous government and their citizens. As such, it would not be appropriate to comment further,” he wrote.

Moquin said the government “is committed to working with Métis partners to advance self-determination, promote reconciliation and build renewed government to government relationships. This includes our ongoing collaborative work toward self-government.”

Alberta Indigenous Relations Minister Rick Wilson said he “knows there are some issues out there” with various Métis groups and the constitution.

However, Wilson said he sees the constitution as a framework and “we can work within that framework to iron out those types of issues.”

“The constitution for us is the underpinning of the foundation which codifies a lot of the processes that enhance the Métis Nation,” said Tomlinson. “It’s not an all-encompassing document as most constitutions aren’t, but it is that foundational piece which sets out how we will…pull together those institutions of government that best service our citizens.”