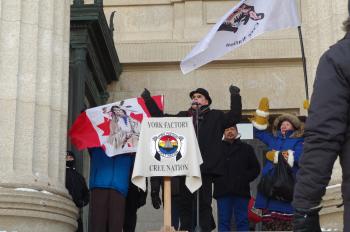 Rally at the Legislature in Winnipeg, Man. on Jan. 19

“The importance of this rally is to bring awareness of the injustices." —Chief Doreen Spence of the Tataskweyak Cree Nation
By Marjorie D.L. Roden
Windspeaker.com Contributor

A rally at the Legislature in Winnipeg, Man. on Jan. 19 sought to raise awareness of the damaging impact on treaty lands in Northern Manitoba by Manitoba Hydro, and the mistreatment of Indigenous women.

Clayton Thomas Muller of Pukatawagan Cree Nation said the Northern Cree and Dene have suffered intergenerational historical trauma from the impacts of hydro development. “These historical traumas continue to manifest in our community through the socio-economic crisis that we continue to try and overcome in a good way.”

Muller spoke of crimes against Indigenous women taking place at the ‘man camps’, where Manitoba Hydro work crews have set up, stories of sexual violence and racism that have recently been uncovered. The company’s activities and development disproportionately impacts Indigenous peoples compared to the rest of society and it’s something that must “absolutely stop and it’s something that absolutely needs to be addressed,” he said.

“The importance of this rally is to bring awareness of the injustices,” said Chief Doreen Spence of the Tataskweyak Cree Nation. “There’s this big corporation, this dam that’s being built just 45 minutes away from my community, and all this stuff is happening in terms of harassment and racism. Basically, (the rally is) to show people that we are not accepting any more of this behaviour that’s being brought upon our people.”

Manitoba Keewatinowi Okimakanak Grand Chief Garrison Settee said “We’ve been enduring all of this violence and sexual discrimination, harassment, all kinds of stuff that has never been taken seriously. It’s our time now for our issues to be brought to the national and international level when it comes to discrimination and racism. It is a crime, so it’s time to call it a crime.”

“The biggest source of renegade methane emissions in this country are mega-hydro dams, not off the tar sands as many people would have you believe.”

Trudeau continues to say the most important relationship of his government is with Indigenous peoples. “We are a fishing community...and like many of the northern communities, our rivers, our lakes, are affected by massive hydro development, which covers our sacred sites, covers our burial sites.”

“We will not just stand back and exist like this for the next 40 years,” said Settee, “because 40 years have passed since the hydroelectric projects have been established and it seems they have perpetuated all kinds of discrimination and racism. It’s time that it stops.”

“We need the people in charge to be accountable,” he said.