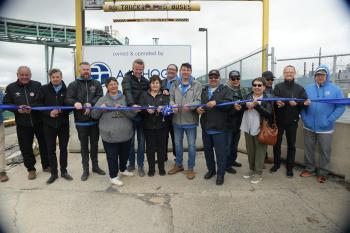 The acquisition of the International Bridge is both figuratively and literally an opportunity to bring together members of the Rainy River First Nation.

On May 20, a ribbon cutting on the Canadian side of the toll bridge, which connects Fort Frances, Ont. and International Falls, Minn., signified the completion of the purchase of assets on both sides of the bridge by the Aazhogan Limited Partnership.

The partnership, which is a 50 per cent split between Rainy River First Nation and the BMI Group, was formed in 2019.

Aazhogan is Anishinaabemowin for “bridge.”

“We’re bridging the gap between us and our members on the American side. I think that’s where the meaning is,” said Rainy River First Nation Chief Robin McGinnis.

“There wasn’t enough room for everybody so a lot of our members went south (into the United States) to work over there and stayed. We have relatives all over in the communities, like Red Lake and stuff, all over Minnesota,” said McGinnis.

He points out that when the coronavirus pandemic hit in 2020 and border closures occurred between the two countries, many families and relatives were separated.

Whether members on either side of the toll bridge will now get special consideration, like passing freely when crossing between countries, is not yet known, said McGinnis.

“As of right now, we haven’t discussed it in detail, but I think that is probably the plan going forward. We were just working on the acquisition right up to the day before so we haven’t really had time to discuss the plans for it,” he said.

Also unclear, added McGinnis, is what kind of revenue the toll bridge will provide to the nation.

Recent numbers are inaccurate because of COVID-19 impacts, although use of the bridge is picking up, he said.

According to pre-COVID figures offered by ezbordercrossing.com, the International Falls border crossing was the busiest in Minnesota and in the top 20 per cent of all crossings between Canada and the U.S. While the bridge is used for trade and truckers, the higher percentage of users are tourists and local residents.

McGinnis expects this sole-source toll revenue to be important to the First Nation, noting that many health and social issues, including addiction treatment, is underfunded by the federal government. He says community meetings will be held to discuss how these additional dollars should be spent “but there are a ton of services we get underfunded for. That’s where a lot of that sole-source revenue will go to.”

McGinnis says the toll fare may go up to reflect inflation.

The International Bridge is comprised of two side-by-side bridges, one of steel and the other of concrete, that were constructed in 1908 and 1979, respectively.

It took the Aazhogan Partnership a year longer to acquire the Canadian assets of the bridge.

McGinnis says approval came faster in the U.S. through their regulatory agency, FHWA Office of Bridges and Structures, allowing Aazhogan to finalize that purchase in May 2021. The U.S. side was purchased from Minnesota, Dakota and Western Railway, a subsidiary of Boise Inc.

On the Canadian side, the bridge was privately owned by Resolute Forest Products, which operated a pulp and paper mill in Fort Frances.  That mill was shut down in 2014. Resolute was formed in 2007 by the merger of Bowater and Abitibi-Consolidated.

Transport Canada required more information, says McGinnis, including engineering studies and proof that Aazhogan could maintain the bridge. He adds the federal election, which took place in 2021, also slowed down the process.

Transport Canada solicited comments from the town of Fort Frances, which initially expressed concerns on a number of issues, including maintenance standards.

“We do have some plans for improving the whole gateway coming into Canada,” said McGinnis.

The bridge won’t be closed during any work, says McGinnis, as it is the busiest border crossing in northwestern Ontario.

McGinnis also noted that Fort Frances mayor June Caul was at the ribbon cutting and expressed how “proud … (and) happy” she was that Rainy River First Nation had ownership of the bridge.

McGinnis is also proud of his community’s accomplishment, noting that only two international bridges are privately owned in Canada.

“I think this acquisition is very unique,” said McGinnis. “The partnership we’ve had with the BMI Group has been fantastic. And Aazhogan plans on making some more announcements soon. There are a lot of plans in the works.”