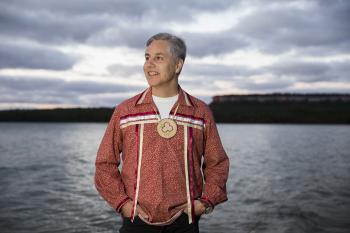 “What we really fundamentally see is that if any economic reconciliation doesn’t have a foundation in truth or justice, even a holistic recognition of the consciousness of the diversity of Indigenous peoples in our whole entire landscape, then you really can’t get to reconciling anything.” — Kyle St Amour Brennan
By Adam Laskaris
Local Journalism Initiative Reporter
Windspeaker.com

This year’s version of the Queen’s Conference on Indigenous Reconciliation highlighted the efforts of conciliation being undertaken in the Canadian economic and legal fields.

Hosted this past Saturday, March 6 primarily by students in the Law and Commerce faculties at Queen’s University, the conference was headlined by keynote speaker John Borrows. He is the Canada Research Chair in Indigenous Law at the University of Victoria Law School and presented to about 80 students, faculty members, and others from across the country.

Borrows, (Anishinaabe/Ojibway), a member of the Chippewa of the Nawash First Nation in Ontario, put the spotlight on historical Indigenous wealth and fighting back against a perception that communities were without any form of prosperity.

“For millennia, Indigenous communities have managed collective wealth with a strong sense of stewardship and consideration for future generations,” Borrows said.

“Through shared songs, dances, crests, and land and resources, legal principles have been created, taught, and integrated into ways of being. Such values have marked peoples’ relationship with the land, waters, plants, animals, themselves and each other.”

Borrows also discussed specific legal frameworks that should be implemented in the Canadian legal and corporate fields.

“We call upon the corporate sector in Canada to adopt the United Nations Declaration on the Rights of Indigenous Peoples as a reconciliation framework to apply these principles, norms and standards to corporate policy and core operational activities involving Indigenous peoples and their land and resources,” Borrows said.

One of the conference co-chairs was Abby McLeod, a 2021 upcoming Commerce graduate from the Nipissing First Nation in Ontario, where she is currently taking her degree online due to the COVID-19 pandemic.

“This is something that really spoke to me, being able to incorporate my roots and my culture to a conference that everyone can enjoy,” she said.

The origins of the conference come from the 2019 Queen’s Reconciliation on Bay Street Conference, named after a documentary of the same name by Andrée Cazabon. The name change to Queen’s Conference on Indigenous Reconciliation in 2020 allowed the conference to have “a bit more flexibility,” McLeod explained. They want to steer away from just focusing on the Toronto business community.

McLeod said she hoped the lessons from the conference would be carried forward with the delegates over the next steps in their careers.

“We have a lot of future business leaders and law leaders,” she said. “Having this platform to have these conversations, hopefully they’ll be able to continue to have an impact and continue the path towards economic reconciliation in their professional careers."

In addition to the keynote speech, the day also consisted of a pair of interactive workshops and a legal and a business panel, followed by a question and answer period. Much of the discussion centered around a single question: What is economic reconciliation?

“There’s so many issues [related to reconciliation]. It’s not a one size fits definition,” said Jennifer Harper, a former Dragons’ Den contestant and owner/operator of the Cheekbone Beauty brand. She was on the conference’s business panel.

“If we’re really being honest with ourselves, the entire world struggles with that. It’s not just in this country. It happens on a grand scale.

“We have to teach our children what a wonderful world would look like and then what is required to be a part of making society better,” she said. “That means everyone gets to eat, everyone has somewhere to live. It’s maybe a socialist point of view, but the system we all live under now and the ideas that define what success really means are coming from capitalist systems so there’s a lot of internal change that has to happen.”

“I feel like I know what economic reconciliation isn’t,” said Kyle St Amour Brennan. He is an Omàmiwinini (Algonquin) Anishinaabe from Kitigan Zibi Anishinabeg First Nation, who works for Shopify as a Commercial Equity Strategist on the Global Indigenous Entrepreneurship team.

“What we really fundamentally see is that if any economic reconciliation doesn’t have a foundation in truth or justice, even a holistic recognition of the consciousness of the diversity of Indigenous peoples in our whole entire landscape, then you really can’t get to reconciling anything,” he said.

Conference organizers hope to return to an in-person format in 2022.