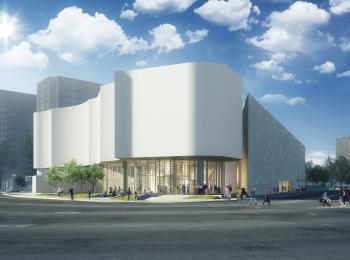 “This initiative is an act of decolonization, supporting reconciliation and Indigenous knowledge transmission for generations to come…” — Dr. Stephen Borys, director and CEO of WAG
By Adam Laskaris
Local Journalism Initiative Reporter
Windspeaker.com

The Winnipeg Art Gallery’s the Inuit Art Centre has a new name.

In a ceremony on Oct. 28, the gallery, known as WAG, announced the centre would be renamed Qaumajuq [HOW-ma-yourq], an Inuktitut word meaning “It is bright, it is lit”.

Qaumajuq is set to open in February 2021 after construction began in March 2018 on a new 40,000-square-foot-building designed by Michael Maltzan Architecture with Cibinel Architecture. It’s home to the largest public collection of contemporary Inuit art in the world.

The naming ceremony was hosted by Dr. Stephen Borys, director and CEO of WAG. The ceremony occurred with a small gathering of Borys and Julia Lafreniere, WAG manager of Indigenous Initiatives. A Qulliq lighting ceremony was conducted by Elder Martha Peet, with virtual appearances from Theresie Tungilik and Elder Dr. Mary Courchene. The latter two formally announced the new names in Inuktitut and Anishinaabemowin respectively.

Tungilik, an Inuk artist from Rankin Inlet, Nunavut, said “Qaumajuq will be a place where all walks of life will experience, through the creation of Inuit art, our survival, hardships and resilience.”

Courchene, who comes from the Sagkeeng First Nation in Manitoba, said the Biindigin Biwaasaeyaah name was created to “include all the Indigenous populations of Manitoba, the First Nations, the Métis, and the Inuit populations.”

“The language keepers and Elders came together in a powerful moment of cross-cultural reflection and relationship-building,” Borys said. “This initiative is an act of decolonization, supporting reconciliation and Indigenous knowledge transmission for generations to come in an effort to ensure WAG-Qaumajuq will be a home where Indigenous communities feel welcome. Where everyone feels welcome.”

In addition to the new name of Qaumajuq, which will serve as the primary name for the space, various areas within the WAG will also have new names in Inuvialuktun (Inuit), Nêhiyawêwin (Cree), Dakota, and Michif (Métis) that were given by Indigenous language keepers.

“Indigenous-focused and Indigenous-led initiatives will be at the heart of this new space and giving the spaces Indigenous names is just the start,” reads the WAG’s website where pronunciations and audio clips for the new names are available.

"We are thrilled to share the names of the spaces in the seven Indigenous languages of Manitoba and Inuit Nunangat,” said Dr. Heather Igloliorte and Dr. Julie Nagam, co-chairs of the Indigenous Advisory Circle for Winnipeg Art Gallery, in a joint statement.

“The Circle demonstrates the breadth of knowledge that represents the relationship to the collection and the buildings and it has been an incredible experience for all Circle members. We are so honoured to gift the institution with these new names that point to a new path forward for galleries and museums in this country,” the statement continued.

The WAG also states that the “historic naming responds to the United Nations Declaration on the Rights of Indigenous Peoples Article 13 and the Truth and Reconciliation Commission’s Call to Action 14i, both of which reference the importance of Indigenous languages.”

Indigenous peoples have the right to revitalize, use, develop and transmit to future generations their histories, languages, oral traditions, philosophies, writing systems and literatures, and to designate and retain their own names for communities, places and persons.

TRC Call to Action 14i states:

Aboriginal languages are a fundamental and valued element of Canadian culture and society, and there is an urgency to preserve them.

A press release issued by WAG states that Qaumajuq “will innovate the art museum, taking art from object to full sensory experience with Inuit-led programming.” One of these features includes the three-storey tall column called the ‘visible vault’ that is filled with thousands of Inuit carvings and immediately viewable upon entry into Qaumajuq.

“This is a place that amplifies and uplifts Inuit stories, connecting Canada’s North and South. This is a site for reconciliation... We can’t wait to unveil this new cultural landmark in the heart of the country with these new names honouring Indigenous voices and languages,” Borys said.