Ontario steps up with action on health 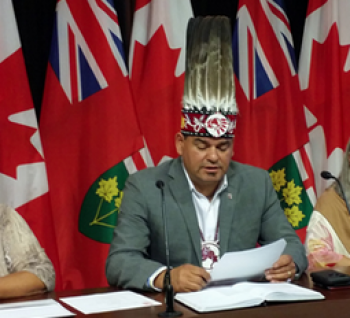 “We are beyond tinkering with policy. What we’re looking at here is a total transformation of the health care system.” ~ Grand Chief Alvin Fiddler.

Ontario has committed close to $222 million over three years to address gaps in health services for the province’s Indigenous population, particularly those in the north.

“It’s unfortunate that in a lot of cases that it takes a declaration of some sort to be issued before attention is given to a community,” said Fiddler.

On Feb. 24, the Sioux Lookout Area Chiefs Committee on Health and NAN declared a public health emergency stating “there are needless deaths and suffering caused by profoundly poor determinants of health.” The declaration called for the province and Canada to “commence prompt and sustained action, with immediate, intermediate and long term strategies” within 90 days.

The province took action within that time frame, announcing Wednesday May 26 funding that will be added to the approximately $208 million the Ministry of Health and Long-Term Care currently allots annually on Indigenous-specific programs and services.

Day applauds the province for stepping up so quickly, but says the crisis in the north – as well as poor health and living conditions in the south – are not recent developments.

“We would have liked this to have been happening sooner,” said Day. “There’s no doubt that $220 million over three years isn’t going to fix the problem … but we’re definitely going to keep the pressure on and look at where the needs are starting to surface again.”

David Jensen, spokesperson for the Ministry of Health and Long-Term Care, says in an email interview that the impetus for action followed a meeting in which Fiddler approached the federal and provincial governments about health issues in his region.

“We also have a new spirit of collaboration with our federal colleagues and we are working collaboratively with our Indigenous partners to develop and implement programs and services that will deliver results on the ground,” said Jensen.

The new funding will be targeted largely to First Nation communities in the Sioux Lookout region and Nishnawbe Aski Nation.

Jensen says NAN and the declaration helped determine the four areas in which the money is to be spent – home and community care, primary health care, diabetes prevention and management, and life promotion (suicide) and crisis support.

Fiddler says a meeting next week in Toronto with the province will outline the next steps to be taken. It is important, he says, that the communities remain involved so that their needs are met, that the new resources reach them, and that changes are rolled out in a timely manner.

“The minister has directed the ministry to put services on the ground as quickly as possible, while respecting the partnership process with our Indigenous colleagues,” said Jensen.

He points out that when the new program is fully implemented it will mean a new investment of $104.5 million topping up the annual amount of money the province spends on Indigenous health programs to $314 million.

Fiddler says the new funding from the province is a “significant first step” to address the disparity in health services, but more is needed.

The federal government has yet to respond to NAN’s declaration although NAN and other First Nations representatives met with provincial Health Minister Eric Hoskins and federal Health Minister Jane Philpott at the same time. Both the province and Canada were involved in drafting the framework set out to address bridging the health gaps.

That framework, points out Fiddler, commits Health Canada to implementing all the recommendations outlined in the auditor general’s spring 2015 report. Auditor General Michael Ferguson found that “overall, … Health Canada did not have reasonable assurance that eligible First Nations individuals living in remote communities in Manitoba and Ontario had access to clinical and client care services and medical transportation benefits….”

“We are beyond tinkering with policy. What we’re looking at here is a total transformation of the health care system,” said Fiddler.

Improving health care in the communities is only one part of a much, much larger picture, he says, which includes the needs for adequate housing, safe drinking water, quality education, and food security.

“We are focusing on building our partnership with Indigenous people in this province and making a real difference in health outcomes,” said Jensen. “Comparing Ontario’s spending on Indigenous health with other provincial jurisdictions is not something we are doing or looking to do.”

Day says other province’s need to take a page from Ontario.

“It will be important as we go forward that all health issues across the country not be looked at in silos or jurisdictions, but that we … get the political commitment of all people involved to sit down and talk about elevating and increasing the quality of life for First Nations and increasing health outcomes for First Nations,” said Day. “That’s everybody’s responsibility. That’s part of reconciliation.”