Promises still in Throne Speech, but leaders say only action leads to reconciliation 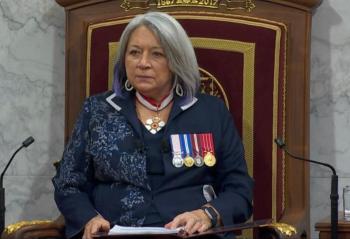 Newly-appointed Inuk Governor General Mary May Simon delivers her first Speech from the Throne, parts of which were in Inuktitut.

“If the promises of the Throne Speech are met—and are met in a way that respects our right to self-determination—the transformative change will begin. If not, we will be looking back on another Throne Speech full of empty words and no progress.” — Native Women’s Association of Canada CEO Lynne Groulx
By Shari Narine
Local Journalism Initiative Reporter
Windspeaker.com

In delivering her first Speech from the Throne this afternoon, Governor General Mary May Simon emphasized one key point by delivering it in Inuktitut, English and French.

The Throne Speech for the 44th Parliament marked the first time a language other than French and English was used to deliver the government’s agenda. Simon is the first Indigenous governor general and spoke her native Inuktitut.

Speaking on national television prior to Simon delivering the 25-page speech, Inuit Tapiriit Kanatami (ITK) President Natan Obed said “We’re not looking for a whole new set of things. We’re looking for the continuation of the work.”

Obed said he wanted to see a reiteration of the government’s commitment to closing the infrastructure gap in Indigenous communities by 2030 and work on anti-racism and Indigenous justice.

“It's incredibly important for the federal government to speak in a distinctions-based way so as to be clear and relevant to each one of the three Indigenous peoples,” said Obed.

He stressed that while he was pleased with the ministers who held key portfolios dealing with Indigenous issues, it was Prime Minister Justin Trudeau who had to lead in reconciliation.

Cassidy Caron, the newly-elected president for the Métis National Council (MNC), joined Obed in stressing the need for a distinctions-based approach by the government.

“We're really looking for government to follow up on those areas from that Liberal platform that supports our Métis Nation priorities,” said Caron.

She said the “number one priority” was self-government and self-determination for the Métis Nation governments.

She also stressed the importance of the federal government in working with MNC, ITK and the Assembly of First Nations in the implementation of UNDRIP, to follow through with a national action plan for MMIWG to end violence against Indigenous women and girls, and to work with Indigenous knowledge keepers to tackle climate change.

All of this action, said Caron, “if done correctly and done quickly will create both symbolic, systemic, and substantive change for our communities and I think that while we work together with the federal government all of those pieces will contribute to reconciliation.”

Caron’s sentiment was shared by the Native Women’s Association of Canada. In a news release issued after the speech, CEO Lynne Groulx said they were “heartened.”

“If the promises of the Throne Speech are met—and are met in a way that respects our right to self-determination—the transformative change will begin. If not, we will be looking back on another Throne Speech full of empty words and no progress,” said Groulx.

Residential schools, unmarked graves, intergenerational trauma and the need to act were all stressed by Simon off the top.

“As we recover from the effects of the pandemic and build a better relationship between Indigenous peoples and non-Indigenous peoples, I urge you to transform discussion into concrete results for us and for our country,” she said.

Simon said the Liberal government would invest significantly in a distinction-based mental health and wellness strategy that would be guided by Indigenous peoples, survivors and their families.

She said the government would accelerate its work with Indigenous partners to address MMIWG.

As for climate change and to address biodiversity, she said the government would work in partnership with Indigenous peoples to “protect nature and respect their traditional knowledge.”

She also said the government would continue to invest in the “empowerment of Black and racialized Canadians, and Indigenous peoples.”

“Reconciliation requires a whole-of-government approach, breaking down barriers, and rethinking how to accelerate our work. Whether it is eliminating all remaining long-term drinking water advisories or implementing the United Nations Declaration on the Rights of Indigenous Peoples, the government is committed to closing the gaps that far too many First Nations, Inuit and Métis communities still face today,” said Simon.

“The Prime Minister has to lead and I think he's got a renewed mandate on reconciliation based on the last three or four months of unrest by this country in relation to their reconciliation agenda,” said Obed.

“Reconciliation is a journey and it's one that will continue on for years to come,” said Caron.

The Liberals outlined action to be taken on other issues as well, including mandatory buy-back of assault-style firearms, increasing immigration levels, continuing to work with territories and provinces to implement a national child-care program, and undertaking measures to make housing more affordable.

Liberals were re-elected for a third term in September and formed a second-consecutive minority government. Ten Indigenous MPs were elected.