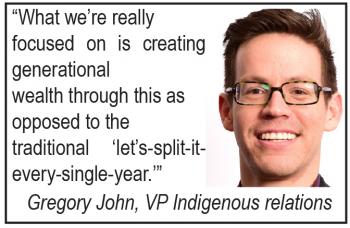 “We’ve made a lot of good strides in gaining support and we hope that all of this work over the last six months in relationship building put into place will achieve critical mass…” — Gregory John, vice president of Indigenous relations, Project Reconciliation
By Shari Narine
Windspeaker.com Contributor

Indigenous communities and organizations that join Project Reconciliation in the majority ownership of the Trans Mountain pipeline and expansion will be reaping the benefits for the next 70 years, said Gregory John, vice president of Indigenous relations for the private enterprise.

A day ahead of its official launch, John told Windspeaker.com that the group will establish a professionally-managed Sovereign Wealth and Reconciliation Fund that will ensure partners are able to invest in community projects long into the future.

“What we’re really focused on is creating generational wealth through this as opposed to the traditional ‘let’s-split-it-every-single-year,’” said John.

Calling the Sovereign Wealth and Reconciliation Fund a “real game changer,” John says details as to how funding will be distributed still have to be determined. Money for the fund will be acquired through existing long-term shipping contracts and will be invested for maximum return.

“We’re changing the model of infrastructure development in Canada, so I think we can take a look at every way that can change the model and …per capita distribution isn’t the best way to look at it,” he said.

Not only will Project Reconciliation’s partners have access to long-term funding, they will also have a say on work undertaken in their traditional territories, in the waterways, and how mitigation proceeds.

For the past six months, Project Reconciliation has been engaging Indigenous communities, including Metis governments, in Saskatchewan, Alberta and British Columbia. While the Trans Mountain pipeline expansion is to twin an existing 1,150-kilometre pipeline from Edmonton to Burrard Inlet, the scope of engagement was widened to include Saskatchewan, because 80 per cent of First Nations in Saskatchewan are engaged in the oil and gas industry.

There are about 340 different Indigenous communities and organizations in western Canada and Project Reconciliation wants to bring the majority on board as partners.

“It’s zero cost for any partner who chooses to become an owner in our proposal here,” said John.

Project Reconciliation must raise $7.6 billion to own 51 per cent of the pipeline.  The figure, although a “moving target,” admits John, has been calculated by taking into account the $9 billion needed to construct the pipeline, the $4.5 billion the federal government spent to purchase it and transaction fees.  That money will come through capital markets.

“There will be a bond issued for a total amount of $7.6 billion. The bond will be built on investments from the likes of pension funds (with) … a 20-year term on it,” said John.

He adds that the Indigenous Opportunities Corporation (IOC) being proposed by Alberta’s new UCP government may play a role in the venture.

Details are sparse at this point as legislation has yet to be introduced, says Ted Bauer, spokesman for the province’s Indigenous Relations ministry.

UCP promoted the IOC during its election campaign as a means “to facilitate First Nations financial participation in major resource projects, including pipelines … and backstop up to $1 billion in Aboriginal investment in natural resource projects and infrastructure….”

The UCP also promised to “consult with First Nations on the design and mandate” of the new corporation.

John is hopeful that Project Reconciliation can play a role in developing the IOC.

“I certainly believe there is an opportunity for the likes of Project Reconciliation to take advantage of something like that. I think it would be a real good example of how the government can support initiatives like ours,” he said.

John also points out that Project Reconciliation understands that Indigenous communities are all at different stages and in order to respect the decision-making process, Indigenous partners will be allowed to come on board at a later date

While engagement with Indigenous communities and organizations by Project Reconciliation has been “significant,” John says the majority of partner communities have asked him not to publicly disclose how many have signed on.

“We’ve made a lot of good strides in gaining support and we hope that all of this work over the last six months in relationship building put into place will achieve critical mass, because what we do have to prove to the federal government (is) that we do indeed have support,” he said.

A decision by Ottawa on the pipeline expansion is expected June 18, but what happens after that is unclear, says John.

Also adding to the uncertainty of timelines is the BC government’s decision last week to appeal the BC Court of Appeals’ ruling that proposed environmental legislation to limit the flow of "heavy oil" into BC would be in direct conflict with federal jurisdiction over interprovincial pipelines.