Program builds strength in the young by making connections to culture 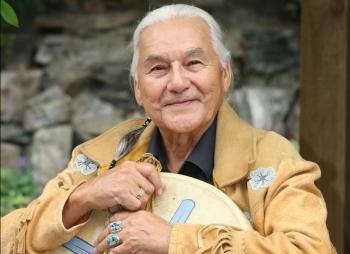 “I can see when someone is crying on the inside, because they don’t speak Cree. People get taken away when they're young and they're going to forget. But what they’ve got is the blood memories to speak it.” — Elder Dr. Winston Wuttunee
By Odette Auger
Local Journalism Initiative Reporter
Windspeaker.com

What do Inuit throat singing, playing spoons and jigging have in common? They are examples of the rich cultural connections early childhood educators are making with children attending Aboriginal Head Start programs.

Cultural Connections began in spring of 2020 in response to the pandemic restrictions. Normally, there would be travel for staff to attend training, or to bring facilitators to training events. AHS were quick to switch gears and adjust their facilitation skills and resources to deliver events online. Children and families were invited to join in Cultural Connections from home.

“What we understood early on in the pandemic was the need to connect with each other was still strong and our Elders were not getting to the Aboriginal Head Start programs,” director Joan Gignac explained.

This fall, guest instructors have included Abigail and Charlotte Carleton, who shared Inuit throat singing, Shyama Priya with powwow steps, and storytime and spoons was shared by Phil and Betty Gladue.

Yvette Bolduc is AHSABC’s training coordinator. She describes the full-hearted engagement of young ones attending.

“When Métis jigging was on,” she said, “some children attended and they danced for the entire hour. Families participate—moms, dads and children. We have been putting on some evening sessions for families who are working during the day.”

“We share the links with all 136 AHS urban sites across Canada,” explained Bolduc.

The opportunity also allows educators to gain insight into other nations, languages, teachings and arts of all forms. An upcoming tourtière-making class will be held with Elder Linda Van Wieringen.

One of the special guests was Elder Dr. Winston Wuttunee, who has been performing as a singer, musician and storyteller since 1973. Over the years, his role has grown to educator, writer and speaker. He is from Red Pheasant Cree Nation, Sask. The University of Manitoba bestowed on him an honourary doctor of letters in June 2019.

Wuttunee shared songs and stories in the Cultural Connections series. He spoke of his own early years in conversation with Windspeaker.com.

He remembers being invited to be with the Elders, so he could listen and learn. At age 81, he’s the Elder now, and he’s returning that gift.

“We need to have that connection all the time, because that's how our blood flows and we need that connection just to keep us right, aligned and on target,” Wuttunee said. He remembers his own early childhood as being immersed in “Cree and horses and hunting.”

“We all had to fight and struggle to get back our language, little by little.” Wuttunee has won awards for his work preserving culture. When he attends events as a speaker, performer or teacher, he meets with many people. He sees right away when they feel the hurt of not knowing their languages or the disconnect of being removed from culture.

“I can see when someone is crying on the inside, because they don’t speak Cree,” he said.

“People get taken away when they're young and they're going to forget. But what they’ve got is the blood memories to speak it. Their knowledge is just as great as anyone else’s. They just need to know how to dip into it. And how you dip into it is by trying.”

Wuttunee says this will bring happiness to many. “When you try, the old people, the ancestors, are happy. They’re smiling.”

When he is asked to bring his singing to an event, he also brings in cultural teachings through sharing stories. It’s his strength, and it brings a lot of joy. Recognizing our gifts is important, he said.  He shares advice that is especially significant to caregivers and teachers of young children.

“When you get the chance to talk to somebody, look at them and connect with them. You’ll feel in your heart and in your mind exactly what they need.”