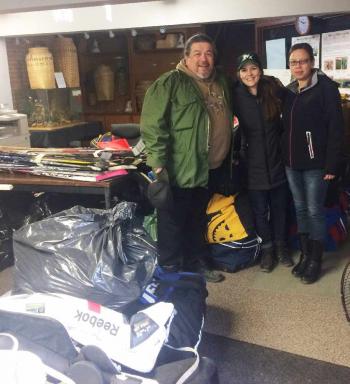 “They took me out on their boat and they helped me with my wetlands collection.” —Fielding Montgomery, PhD candidate and left winger with the Markham Thunder

Fielding Montgomery, a left winger with the Markham Thunder of the Canadian Women’s Hockey League (CWHL), decided to gather some hockey gear for the Walpole Island First Nation.

Though she is not Native herself, Montgomery was eager to assist the First Nation because of the warm reception she received there and fond memories that she has of the community.

Montgomery had travelled to the Walpole Island First Nation two summers ago. That’s because as part of her PhD work at the University of Toronto, she was sampling various wetlands in southwestern Ontario.

“They took me out on their boat and they helped me with my wetlands collection,” she said of people from Walpole Island First Nation.

In return, Montgomery, who stayed on the First Nation for three weeks, did a hockey presentation for the community.

Montgomery was thinking about those in Walpole Island again recently when she looked in her own garage and saw how much of her own used hockey equipment she had. She thought donating that excess equipment to the First Nation might be a good idea.

“It started out with the hope to give it to them,” she said. “I wanted to make sure I could reach out to them first and make sure the equipment was something they could reuse.”

The Thunder organization even got involved and asked fans to bring equipment to one of its home games in early January.

Even after the drive was supposed to be over, people contacted Montgomery via social media to see if it was too late to make donations.

“I had a couple of people come meet me at my house,” said Montgomery, who lives in Toronto.

Montgomery estimates 500 pieces of equipment were donated. She stopped counting an exact number as it was much easier to count the amount of hockey bags – 42 – that were filled.

“It blew me away with the good quality of some of the stuff we were able to get,” she said.

Because donation bins were set up at the Thunder home rink for a number of days, Montgomery said she was not able to determine who exactly was bringing in gear.

Montgomery said she was also shocked about 50 pairs of skates that were donated to the equipment drive.

After all the gear was collected, the next step was to transport it to the Walpole Island First Nation.

Because the amount of gear donated far exceeded her expectations, Montgomery had to rent a 16-foot moving cube van to transport all the equipment.

Since the Thunder did not have any games this past weekend, Montgomery travelled with her boyfriend Philip Wright, a former goalie who split his university hockey days between Dalhousie University and St. Mary’s University, to deliver the gear.

A GoFundMe account was created to cover the estimated $500 in truck rental costs that Montgomery incurred. The account reached its full fundraising goal in a few days.

Montgomery added that Walpole Island officials received so much equipment that they are not sure they will be able to use all of it themselves.

“They seem to be a central First Nation in their area,” Montgomery said. “They’re thinking that they’ll be able to give some other First Nations some of the stuff.”

Montgomery is thrilled with the part she was able to play in this equipment drive.

“I’m really excited about it,” she said. “I’ve been mentioned as spearheading this. But it was really a community effort that made this happen.”

Montgomery is keen to maintain a relationship with Walpole Island hockey players.

“I’m not sure if a future equipment drive is in the works,” she said.

This year’s youth tournament, which will feature more than 200 clubs from across Ontario, will be staged March 11 to May 15 in Mississauga.

Montgomery is hoping to attend this year’s Little NHL event to visit with participating players from Walpole Island. And depending on their schedules she’s also hoping to bring along some other CWHL players as well. 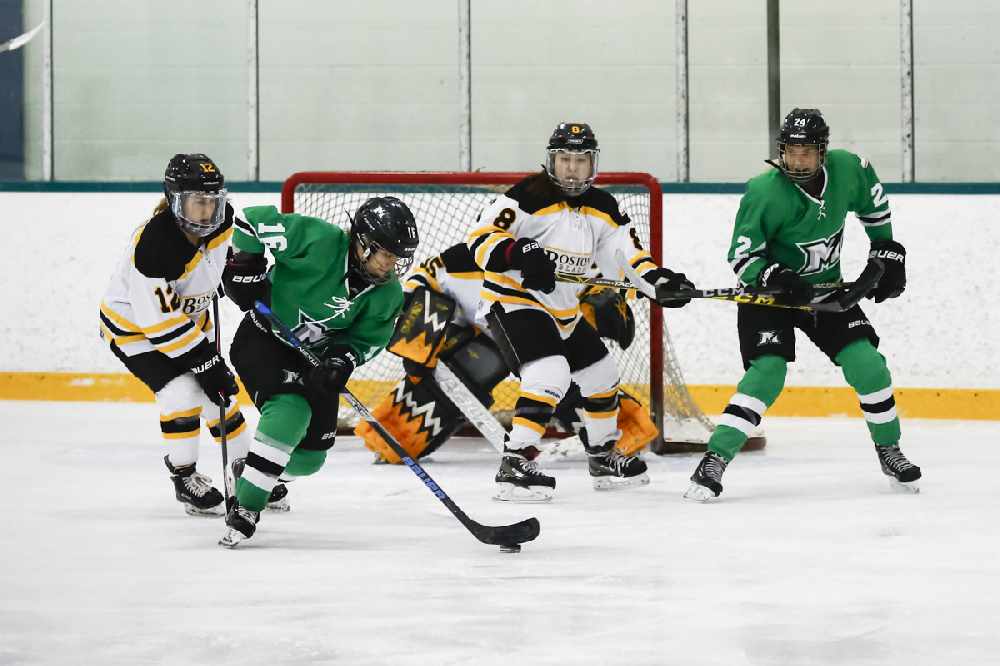 Fielding Montgomery with the puck. Photo by  Heather Pollock.