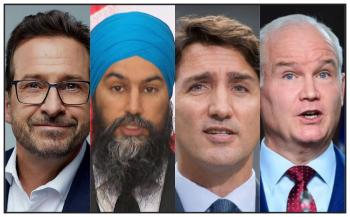 As Prime Minister Justin Trudeau and his government ministers rolled out their greatest hits to the Assembly of First Nations (AFN) chiefs-in-assembly this week, the leaders of the federal opposition parties used that same opportunity to list the government’s failures.

But all parties committed to supporting First Nations in moving forward from the trauma created by the Indian residential school system in Canada and the more recent uncovering of unmarked burial sites at the former schools.

“I’m listening to what we as government must do to support you,” said Trudeau. “And I can tell you Canadians are listening, too. In fact, not only are they listening, they’re calling for more action faster. And that’s exactly what we are ready to deliver.”

Trudeau re-iterated what Justice Minister David Lametti, Crown-Indigenous Relations Minister Marc Miller and Indigenous Services Minister Patty Hajdu had said to chiefs on Dec. 7. He committed to appointing a special interlocutor to work with Indigenous communities on the burial search at residential schools across the country, while ensuring communities would have the supports they needed.

Trudeau also committed to fighting racism by implementing Joyce's Principle, which guarantees all Indigenous people equal access, without discrimination, to all social and health services. It’s named for the late Joyce Echaquan after she videoed the racist treatment she endured from staff in a Quebec hospital before her death.

Chief Ralph Leon of Sts'ailes Nation thanked Trudeau for recognizing that climate change was real and encouraged all levels of government to work with First Nations toward solutions.

“On climate change … we’ve been working closely with the government of B.C. and municipal governments to make sure that on response to extreme weather events, Indigenous leadership and knowledge is folded into the process and not added on at the end as an extra,” said Trudeau.

Bloc Québécois leader Yves-François Blanchet, who along with the other opposition leaders addressed chiefs on Dec. 8, focused on the motion his party put forward calling on the federal government to ensure all religious institutes involved with residential schools opened their records.

That same motion, which was unanimously adopted in June, included calls for a national residential school monument to be erected in Ottawa.

Miller gave his commitment to a national monument, and also reminded chiefs that his government had created the statutory holiday, the National Day for Truth and Reconciliation, which was observed for the first time on Sept. 30 this year.

Conservative leader Erin O’Toole said he did not doubt that Trudeau and Miller “care deeply about reconciliation and improving lives” but that the Liberal government was overpromising and underdelivering.

“Symbolism is important but it should never be a barrier to concrete action and measurable results…. Reconciliation at its core means re-establishing trust. It means rebuilding respect. It means forging partnership with First Nation leaders, with nations, with businesses, with Indigenous-led initiatives to help the relationship of reconciliation move forward,” said O’Toole.

He committed to making Indigenous people full partners in economic development and opportunities.

Chief Peter Collins of Fort William First Nation (Ontario) solicited support from O’Toole on a long-term care project that was shovel-ready but had not received government go-ahead.

First Nations need a “role in the governance of how funds or royalty or economic expansion” happens, said O’Toole. “Anything we can do to help advance dialogue and advance projects, we’re in favour of 110 per cent.”

NDP leader Jagmeet Singh focused on the Liberal’s inability to deliver on clean drinking water on all reserves and meeting other infrastructure commitments; government’s lack of movement on the Calls for Justice from the National Inquiry on Missing and Murdered Indigenous Women and Girls; “fighting kids in court” by appealing the Canadian Human Rights Tribunal’s decision on compensation for children taken into government care; and “picking and choosing” the aspects of the United Nations Declaration on the Rights of Indigenous Peoples that government wished to implement.

“We want to be allies … to work with you. We want to see First Nations-led solutions,” said Singh.

Chief Tony Wawati of Barriere Lake First Nation told Singh his Ontario community is in a housing crisis. He said there had been 13 attempts of suicide and four deaths by suicide.

“We would invest in infrastructure and the most important infrastructure, outside of making sure communities are safe, is housing. The overcrowded housing, I think, directly relates to your suicide. It makes life difficult. It makes young people lose hope and it’s heartbreaking when we hear these stories,” said Singh.

“There’s enough resources to build more homes, to help with the development that Indigenous communities want. It’s got to be for Indigenous people by Indigenous people supported by the federal government. That’s the vision we have,” said Singh.