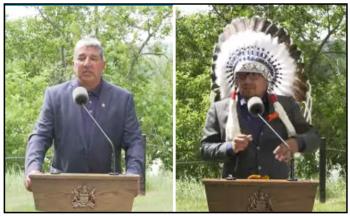 Indigenous leaders welcomed the $8 million announced today by the Alberta government to support community-led research into undocumented deaths and burials in residential schools.

“There’s never no real, real, real hard costs, I’ll say, known when you’re dealing with the unknown,” said Stan Delorme, chair for the Buffalo Lake Métis Settlement, adding the funding would “get us started and work from there and see where we’re at, see where the funding takes us and what it is we can afford to do for our community.”

The grant dollars will be available to Indigenous communities and organizations at a maximum amount of $150,000 per application to allow for a  wide variety of actions, including research such as gathering oral histories from Elders; use of ground-penetrating radar and other technologies to explore potential unmarked burial sites; partnering with experts experienced in locating human burials; and maintenance and commemorative work, such as installation or restoration of grave markers, placement of memorials or commemoration events.

Alberta had more residential schools than any other province or territory with 25 federally funded and church-run schools open at various times between 1872 and 1975.

Kenney said that while some of these schools are no longer standing, it could be concluded that all or most have graves close to them.

“The Truth and Reconciliation Commission’s chapter on missing children and unmarked graves underscores the importance of this work being led by Indigenous people. Each of them will have their own approach about what is the best way and we will honour that. Alberta’s government wants to do its part to help First Nations do that critical work,” said Kenney, who also called it a “moral obligation.”

Kenney also committed to the TRC’s Call to Action 71, which calls for the provinces and their chief coroners to work with the National Centre for Truth and Reconciliation on identifying archival records of where students lived and died. He said that Alberta’s records from that time period “were limited and in some cases very little remains,” however, whatever can be found by the government will be made available to the national centre and any interested local First Nation.

Morin said the funding was a “significant start” and he appreciated the flexibility of the grant program.

“I’m just thankful the province … gave the decision-making capacity back to the nations and settlements themselves. It’s a good move,” he said.

Morin added that the University of Alberta’s Institute of Prairie and Indigenous Archeology has reached out to his nation offering to help. IPIA is an Indigenous-led institute with the expertise in using various remote sensing technologies (including ground-penetrating radar) in burial contexts across the prairies.

“The money that we will be taking we will be using it accordingly to honour the people who took part in residential schools, the ones that did not make it home, the ones that brought the memories home with them …. We will give this opportunity for them to help them in their healing, to help our communities in our healing,” said Young.

Morin said the first site Enoch Cree Nation may want to examine is Poundmakers Lodge Treatment Centre on the boundary between Edmonton and St. Albert. Poundmaker’s was the primary Edmonton residential school site. It was run by the United Church of Canada, from 1924 to 1968. Since 1973, the site is home to Poundmakers, an addictions treatment facility that uses Aboriginal culture, spirituality and the 12-step program in its healing therapies.

“I know there are stories and I know there is a wanting to search that site so we’ll be approaching Poundmaker to have those initial discussions,” said Morin.

Delorme said his settlement has some families from the Lac La Biche area, so the Lac La Biche Mission may be on the priority list. The mission operated as the Notre Dame des Victoires from 1893 to 1898 and was designated as an Indian Residential School.

“I know a lot of people have been carrying around a lot of sorrow here. This new program, it’s not going to change the past, but it can help build a better future … and maybe help to get long awaited answers before too much more time passes,” said Wilson.

He encouraged communities to work together where possible on applications for the sites. He pointed out the provincial dollars could be combined with a federal grant, which could result in successful applicants having all their costs covered.

The federal government has a $27 million fund committed to identifying and commemorating the dead at burial sites at residential schools.

Applications for provincial funding will be accepted from today until next January.