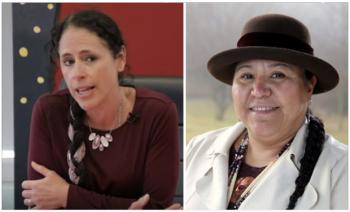 “It’s just so important to contain this thing. We have to make sure that we’re all doing our best and there are going to be sacrifices.” —Shirley Bourdouleix, senior nursing consultant
By Shari Narine
Windspeaker.com Contributor

Tradition and culture do not have to be lost to social distancing because of the novel coronavirus pandemic, but they do need to be carried out differently.

“Everything we’re talking about with the pandemic is focused on physical environment, the social distancing. But while we’re doing that to keep ourselves safe and respecting the future, we also have to be thinking about our relationship with creation, our relationship with the spirit,” said Carol Hopkins, executive director of the Thunderbird Partnership Foundation.

“That’s one place where we don’t have to be worried about social distancing because the spirit is everywhere. All of creation is all around us.”

Hopkins and Restoule stressed the importance of mental health in a time where measures to control the spread of COVID-19 were forcing First Nations to declare local states of emergency, close borders to non-members, and have community members self-isolate within their homes. Children and Elders were particularly fearful.

“One of the things to think about is … how to use culture as a way to manage our wellness and how to think about taking care of ourselves from a very spiritual and holistic perspective,” said Restoule.

Both women talked about adapting cultural and traditional practices and staying away from large gatherings, including sweat lodges. Reconnecting with the land, smudging, prayers, meditations, boiling cedar tea were all examples of traditional practices. But they also touched on recording children dancing and posting it on YouTube; sharing cultural stories with children; skyping, texting and talking on the phone.

Bourdouleix acknowledged that cultural ceremonies and practices were important for well-being and mental health. However, she also pointed out the necessity for social distancing, washing hands, cleaning surfaces, and protecting the vulnerable.

“It’s just so important to contain this thing. We have to make sure that we’re all doing our best and there are going to be sacrifices,” said Bourdouleix.

Prior to yesterday's virtual town hall, Indigenous Services Minister Marc Miller announced that the money would be flowing directly to First Nations, Metis and Inuit leadership in order “to provide them with the maximum flexibility to do what they need to support their communities in a time of crisis.”

First Nations will receive $215 million, with the base amount adjusted for population, remoteness and community well-being. Inuit will get $45 million which will flow to each of the four Inuit land claim organizations through an allocation determined by the Inuit Tapiriit Kanatami and regional leadership. The Metis governments will share in $30 million. There will also be $15 million distributed to regional urban Indigenous organizations to support Indigenous people living away from their communities.

“This is just the beginning. We know that more support will be needed and we will be there to make sure no Indigenous community is left behind,” said Miller, who joined the COVID-19 Cabinet committee in the regular daily press briefing. Miller is not part of the committee.

In speaking at the virtual town hall, Gideon said the government’s focus was to get funding out to Indigenous communities as quickly as possible.

“No (allocation) approach would have been perfect, but we did need to respond and very quickly for the need for resources across communities, and so that funding will be allocated as close to April 1 through communities’ existing agreements,” she said.

Gideon stressed that the funding was not a cap and that communities should continue to make requests to ISC regional offices for additional support if the funding provided was not sufficient to meet their unique needs.

“There will also be additional resources in the coming fiscal year for social assistance recognizing that we anticipate an increase in demand for those resources as well,” she said.

Gideon said that lessons learned by both ISC and the federal government in the handling of H1N1 and SARS had allowed them to “be better prepared and to offer more robust support to communities than what was available previously.”