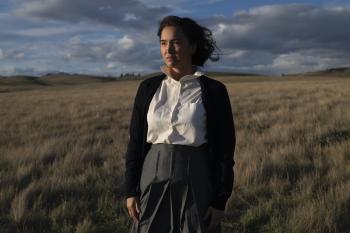 Grace Dove is one of three actresses who depict the character Cree matriarch Aline Spears in Marie Clements' film BONES Of CROWS.

“I do think a lot of generations that went to residential school weren’t able to tell us those experiences in our family until quite later on. So, I think those kinds of discoveries are quite profound, but also have a way of unfolding over years.” —writer/director Marie Clements
By Sam Laskaris
Local Journalism Initiative Reporter
Windspeaker.com

Yes, other films have been made about the residential school system that existed in Canada.

But Marie Clements, a Métis director/writer, has set a new precedent with her film BONES OF CROWS, which had its world premiere this past Friday, Sept. 9, at the Toronto International Film Festival.

BONES OF CROWS is unique in that the film unfolds over almost an entire century. It features Cree matriarch Aline Spears, who is played by three different actors in the film, and her experiences with residential school and her family’s ensuing generational struggles.

For starters, the Spears character is played by Summer Testawich. Then, Grace Dove depicts the character. And the eldest version of Spears is played by Carla-Rae.

Clements, who lives on Galiano Island in British Columbia, said the concept of BONES OF CROWS was initiated three years ago when she had a meeting with Sam Grana, who was a writer for The Boys of St. Vincent, a 1992 Canadian television mini-series. The Boys of St. Vincent was inspired by the child sexual abuse scandal in the Roman Catholic Church that had taken place in an orphanage in Newfoundland.

Clements’ late mother Dora, who was from Fort Good Hope in the Northwest Territories, attended the Aklavik Roman Catholic Residential School, which was also known as the Immaculate Conception Residential School.

Clements is unsure how much time her mother spent at the school.

“It’s really hazy in my family,” she said. “My grandmother died when my mother was six, so I believe all the kids went to residential school after that.”

Clements said that three of her aunts, who were major influences in her life, also attended the residential school. She tried to combine their stories, along with those from her mother, to create the lead character in BONES OF CROWS.

“I do think a lot of generations that went to residential school weren’t able to tell us those experiences in our family until quite later on,” Clements said. “So, I think those kinds of discoveries are quite profound, but also have a way of unfolding over years.”

Clements felt the film would be enhanced by having it take place over numerous decades.

“I was definitely looking to tell a multi-generational story,” she said. “But we were also looking to tell a story that was motivated by what triggers us, what triggers those memories and to stay authentic with that experience of our parents, our grandparents moving in the modern world to live each day better but also being pulled back or being triggered by their experiences.”

Clements is hoping BONES OF CROWS audiences understand the film is not simply about residential school life.

“I think it’s a look at that experience through an Indigenous lens but also one that helps us understand the kind of resilience that Indigenous people had and have,” she said.

Several scenes for Clements’ film were shot at the former Kamloops Indian Residential School in B.C.

The school was thrust into the international spotlight in May 2021. That’s when it was announced that 215 unmarked graves, believed to be the remains of children who had attended the school,  were found on the grounds.

“It was very timely, and it was very impactful and kind of layered to understand that what we were working on was a dramatic narrative based on truth,” Clements said.

“We were in pre-production and we were already shooting when a lot of these discoveries were taking place. And so, I think it was a bit unsettling because I had already previously written the script where the bones of children were discovered and that was taking place, and then of course it started to happen in various places in Canada.”