Pope needs to give more than a qualified apology during visit this summer, says survivor 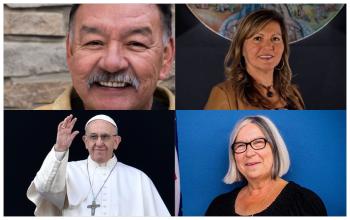 “We fully expect that the Pope will reiterate the apology that he did give in Rome.” — Edmonton Archbishop Richard Smith
By Shari Narine
Local Journalism Initiative Reporter
Windspeaker.com

Shubenacadie Indian Residential School survivor Dorene Bernard’s heart is heavy despite the confirmation last week of the Pope’s visit to Canada and an apology on Canadian soil.

“My prayer is that … he’s going to elaborate fully,” said Bernard about Pope Francis. “He’s had time to think about what that apology means and about restitution and the acceptance. What that would mean to Indigenous peoples.”

“I pray that whatever they say, whatever they do will strengthen people’s faith because a lot of people need something to believe in and they need their spirituality to carry them through these hard times. It’s very important for the Elders. Many of the Elders are still practising Catholic…They need that to carry them.”

On April 1, Pope Francis delivered a qualified apology when an Indigenous delegation from Canada met with him at the Vatican.

“For the deplorable conduct of those members of the Catholic Church, I ask for God’s forgiveness and I want to say to you with all my heart: I am very sorry. And I join my brothers, the Canadian bishops, in asking your pardon,” said Pope Francis.

The Pope also committed to coming to Canada this summer.

On May 13, Edmonton Archbishop Richard Smith announced the Pope’s visit from July 24 to July 29.

“We fully expect that the Pope will reiterate the apology that he did give in Rome,” said Smith.

Bernard wants more. She wants an apology for the Doctrine of Discovery “that allowed for colonization and genocide…and also the general abuse throughout the education system, the residential school system, which it was set up for, and assimilation. Those are the key things for me.”

“Many of them are seniors and, of course, they can’t afford to go and they need that extra help to get to where they need to be. I think if it’s possible for the government to assist the Elders, the survivors, to go to those meetings, I think it’s very important that they do support that… They’ve been waiting all their lives,” she said.

Smith said whether the church will offer financial aid for the visits is still to be determined, but “we certainly do want to do what we can to support them being present with the Holy Father.”

Smith announced that due to the Pope’s age (85), health, and difficulties with traveling, he would base his visit from the communities of Edmonton, Quebec City and Iqaluit.

“Although travel for the Holy Father for this visit is understandably very restricted, nevertheless we shall work with our Indigenous partners to ensure that these encounters with the Holy Father where they occur will have a meaningful impact for everybody across this vast expanse of our land,” said Smith.

Immediately following the announcement, the British Columbia Assembly of First Nations issued a statement “calling on the Pope to revise his plans” as Tk’emlúps te Secwepemc is not included.

The uncovering of 215 graves on the grounds of the Kamloops Indian Residential School in May 2021 awakened non-Indigenous Canadians and the world to the claims of many residential school survivors of the atrocities leading to deaths at the institutions.

Tk’emlúps te Secwepemc Kupki7 RosanneCasimir, who was part of the AFN Rome delegation, called her meeting with the Pope “respectful… But he needs to show good faith on this visit by paying his respects to the Indigenous children buried on the Kamloops Indian Residential School grounds where his church operated."

Manitoba Métis Federation President David Chartrand said he was “disheartened” to hear Manitoba was not chosen as one of the Pope’s sites. Chartrand and a delegation from MMF had a separate audience with the Pope in mid-April. At that time, the MMF asked the Pope to consider a visit to Winnipeg, which would include blessing Riel’s burial site in the St. Boniface Cathedral's cemetery.

“We’re not giving up hope,” said Chartrand. MMF has sent the Pope a letter asking him to reconsider.

“I recognize the impact the Pope’s visit will have in Treaty 6, to the survivors, their families and communities,” said Arcand in a statement. “I look forward to meaningful dialogue with Pope Francis.”

Smith said dialogue with Indigenous partners would lead to a formal program being finalized and he expected that announcement to come in June.

When Pope Francis announced his intention to visit Canada, he tied it to the Ste. Anne pilgrimage. Such pilgrimages happen in multiple locations in Canada near the end of July.

Bernard said if funding were made available, her mother, a Shubenacadie Indian Residential School survivor, would probably make the bus trip from her home in Baltimore to Quebec City as part of the annual Saint Anne de Beaupre pilgrimage. The shrine in that city is the oldest pilgrimage site in North America.

Métis Nation of Alberta President Audrey Poitras said she was hopeful the Lac Ste. Anne pilgrimage would be part of the Pope’s agenda.

“The location is culturally and spiritually significant for the Métis Nation of Alberta and all Indigenous Peoples in the Country,” Poitras said in a statement.

Lac Ste. Anne is located about one hour northwest of Edmonton.

In 2015, the Truth and Reconciliation Commission on the legacy of Indian residential schools delivered its final report with 94 calls to action. Call 58 called upon “the Pope to issue an apology to Survivors, their families, and communities for the Roman Catholic Church’s role in the spiritual, cultural, emotional, physical, and sexual abuse of First Nations, Inuit, and Métis children in Catholic-run residential schools…to be delivered by the Pope in Canada.”

“It’s a long-awaited call to action. It’s taken several years for us to get here. It’s good. Many of our devout catholic survivors have passed on over the years. I think this would have been good for them to hear,” Poitras said.