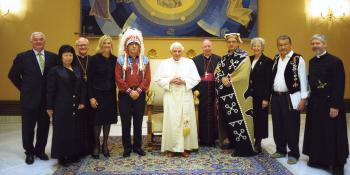 Delia Opekokew (second from left) with the Assembly of First Nations delegation that had a private audience with Pope Benedict XVI in 2009. (Photo supplied)

“It’s still outstanding that neither pope (Benedict or his successor Francis) apologized for the Doctrine of Discovery and the harms that it has brought our people all over the world.” — Delia Opekokew
By Shari Narine
Local Journalism Initiative Reporter
Windspeaker.com

On the eve of Pope Emeritus Benedict XVI’s funeral, Delia Opekokew’s feelings of him remain the same today as they did when she met him in 2009.

Opekokew was one of 10 members of a delegation from the Assembly of First Nations to have a private audience with Benedict in Vatican City that year.

Shortly after that meeting, she wrote that the Pope had a “look of love on his face” when he blessed an Eagle Staff, and that he was “kind, serene…gracious.”

“Yes, they are the same feelings specifically about the Pope himself,” Opekokew told Windspeaker.com in an exclusive interview.

“The difference now,” she said, “is that the institution, the Roman Catholic Church itself. I have strong feelings about its inability to take responsibility for the sexual abuse the individuals from the church inflicted on Indigenous children in Canada and other places.”

When the delegation met with Pope Benedict XVI in 2009, he expressed his sorrow about how some members of the church conducted themselves.

The invitation to meet with the Pope came from Benedict XVI three years after the Indian Residential School Settlement Agreement was signed. The Catholic Entities were among the religious signatories to that agreement which saw compensation provided to children abused through the federally-funded schools operated by the churches.

One-quarter of those then met with Benedict in private. Among those were four Indian residential school survivors, including Opekokew, and then-AFN national chief Phil Fontaine.

Opekokew, a member of the Canoe Lake First Nation in Saskatchewan, attended two different residential schools for a total of 11 years.

She kissed the Pope’s ring and later presented him with moccasins beaded by her mother.

In her 2009 account of that meeting, Opekokew wrote, “I told the Pope that my mother, Margaret Opekokew, is from the Canoe Lake Indian Reserve in Saskatchewan, is a Treaty No. 10 Cree, and is 93 years old. She still makes her own moose and deer hide in the traditional manner of the Cree people, cuts the hide into several moccasins, designs and then beads them. I told the Pontiff that she is an Indian residential school survivor, and that she maintains her strong beliefs and devotion in her two-part cultural identity: she is a devout Roman Catholic and follows her Indian spirituality. I told him that my parents had sent me to Indian residential school in order to get an education. He smiled and listened intently as I spoke. The Pope thanked me and asked me to thank my mother. I asked him to pray for her and he agreed to do so.”

Reflecting now on that exchange, Opekokew said, “It was important for me that when I spoke to him directly, when I was explaining for my mother about…her beadwork that he understood that…She and my father were strong believers. So in any way he could enhance her sense of serenity and peace, I really respected that.”

Prior to meeting the Pope, Opekokew recounts a conversation she had with Catholic representatives and Vatican officials about local parishes with Kateri Circles. Many of these circles are comprised of Indian residential school survivors who try to emulate the life of Blessed Kateri Tekakwitha, a Mohawk/Algonquin woman born in 1656. Blinded by smallpox at the age of four, Kateri was baptised at 20 years old, and devoted herself to a life of piety, chastity and corporal mortification (causing bodily pain to herself for atonement of sins). She died at the age of 24 in 1680 near Montreal.

In a move that was viewed as political and a step toward reconciliation with Indigenous people in Canada, Benedict canonized Kateri Tekakwitha in 2012. She became the first Indigenous person of Canada to be sainted.

“I think it was important that (Kateri) was canonized. But on the other hand, I think it’s important (Benedict) did partially apologize, at least for the individuals who caused the suffering. But it’s still outstanding that neither pope (Benedict or his successor Francis) apologized for the Doctrine of Discovery and the harms that it has brought our people all over the world,” said Opekokew.

That doctrine declared land uninhabited and decreed that Christians could “discover” the land and take it from the first peoples.

Opekokew firmly believes that the 2009 meeting with Benedict paved the way to Indigenous delegations meeting with Pope Francis in the Vatican this past April and then the Pope’s visit to Canada in July.

However, Opekokew, who was in Saskatchewan when Francis was in Alberta, did not attend any of the three events hosted by the Pope.

Opekokew, who is a lawyer admitted to the bar in both Saskatchewan and Ontario, understands the need for healing well beyond her personal experience and that of her family members. She served as an adjudicator with the Indian Residential Schools Adjudication Process. Those faces she saw on television were “the same kind of faces I saw when I was the deputy chief adjudicator holding hearings across the country. It was really important to see the faces of people who had suffered deeply.”

Claimants told her their stories of neglect, assault, molestation, and violation, and about the damage the abuse left.

Benedict resigned the papacy in 2013 and became the first Pope to take such action in 600 years.