Play is a ‘love letter’ to restoring the familial bond 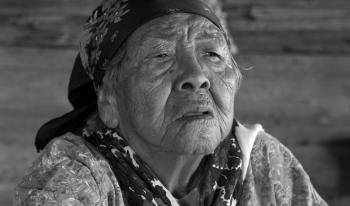 “…because our ancestors, that was their goal. They prayed so hard so we could find ways to get out of this colonial grip that is destroying our children.” –Michelle Thrush
By Shari Narine
Local Journalism Initiative Reporter
Windspeaker.com

The year is 2077. The day is Sept. 22. A young man is speaking to a Blackfoot Elder, who has sought refuge in a cabin in the woods of southern Alberta. The world has collapsed. Climate change has taken over. There have been water wars.

Michelle Thrush, playwright, artistic director and director of O’kosi, admits the premise is “grim… (but) look around… It scares the hell out of me that we are going to go into water wars and … that the earth is going to burn.

O’kosi, meaning “in the fall when we gather,” is the newest production from Making Treaty 7, headquartered in Calgary and co-founded by Thrush in 2012. The entire show takes place on Sept. 22—not coincidentally the date the production debuts—and the date of the signing of Treaty 7 in 1877 at Blackfoot Crossing.

“(The play) time jumps but the audience will understand this is a very specific date and portals are being opened and ancestors are stepping in and out. It’s quite an interesting concept,” said Thrush.

The non-linear time jumping takes the audience 55 years into the future.

At that point, in the cabin, the Elder tells the young man that it all goes back to the signing of Treaty 7 with the colonizers.

“Basically, the old man tells him that… if there was an understanding during that treaty to walk side-by-side, to learn from the people who originally know this land, this world could have been a different place. We might not have climate change around the world if people listened to Indigenous people and understood the knowledge that Indigenous people have with the land and how to work beautifully with the land in treaty,” explained Thrush.

Instead, the signing of treaty in what would become southern Alberta took the land away from the Blackfoot, forced the First Nations onto reserves and into an “apartheid state,” created the Indian Act and tore families apart.

Thrush, the mother of two daughters, 20 and 22, says her work has always focused on families. Her personal story is one with a “vacant mom” and raised by a man who was a functioning alcoholic. It wasn’t until she became an adult that she started realizing the impacts of colonialism and the struggles that came from surviving residential school.

When her girls were born, Thrush said, she needed to “become the mother I didn’t have.” She cobbled together a support system through friends, families, books, teachings and classes.

“That was a revelation to me: if I’m struggling, how many other parents out there were struggling to fill that void of what it means to have healthy parenting in your life?” she said.

Thrush describes O’kosi as a “love letter between parents and children. I'm trying really hard in this show to mend that bond that's been hurt through colonization… The way it's written, they're both adult children on stage...What they say to their parents and how that bond has been tended to between parent and child that's what happens on stage.”

Thrush, who is Cree but grew up in Calgary, which is located in Blackfoot territory, says she was deliberate in casting the eight Blackfoot actors. Actors are members of the Piikani, Tsuut’ina, and Siksika Nations and the Blood Tribe.

“This is a Blackfoot story, but this has happened right across Canada in various ways where colonization, whether there was a treaty involved in the territory or not, colonization has done something really intense to the family. That’s really why I wanted to do in this show, just to look at how our family systems have been broken down. Whether it’s in Blackfoot territory or it’s in (British Columbia), there’s a real destruction that’s happened to the bond between parent and child due to the removal of children,” she said.

Thrush conceived of the idea for O’kosi six or seven months ago. The work was guided by Elders, like all Making Treaty 7 productions, and the majority of the story was fleshed out by Thursh's creative team during a week-long retreat in Waterton Lakes National Park. Later, Thrush embellished and edited the script as necessary.

“Because it’s a brand new show that’s a bit of a unique challenge because we were still workshopping a few things in rehearsal,” said Thrush.

Actors were brought together for three weeks of rehearsals on the Making Treaty 7’s home stage, Grand Theatre. However, because Sept. 22 couldn’t be booked there for the opening of the production, it is being performed at the Pumphouse Theatre. The two stages have different layouts, which meant adaptation from rehearsal to performance.

The production includes video that is projected on a large screen between scenes. Three actors are part of the video and five actors perform on stage. There is also “beautiful fusion” between a non-Indigenous band and powwow singers, says Thrush, and spoken word poetry.

Thrush hopes to pack the Pumphouse Theatre with Indigenous audiences.

Non-Native people are “100 per cent welcome to come observe this wonderful play” but Thrush says it’s not her intention to tackle the racism that is prevalent in southern Alberta. Instead, she says, O’kosi is about compassion and for non-Indigenous people to get an understanding through the character of Grace, a First Nations woman who lives on the streets because her child was taken by the system and “it destroyed her.”

“It’s important for non-Native people to get that treaty was not beneficial. They received the land and Indigenous people got this little reserve and were put into apartheid and got five bucks. I think it’s exposing that also. (Treaty) was not a fair deal at all,” said Thrush.

Upon the signing of Treaty 7, the Crown agreed to pay status First Nations $5 annually and perpetually.

Past Making Treaty 7 productions have performed to packed theatres with the majority of those audiences being non-Indigenous.

Success for O’kosi, says Thrush would be Indigenous people turning out in high numbers, understanding that this theatre space is safe and welcoming for them.

To help attract Indigenous theatre-goers, Making Treaty7 has implemented a three-tiered “pay what you can afford” pricing scheme with tickets at $15, $45 and $75 each.

“I want our people to … fall in love with themselves and know that we have come from such an incredibly strong background, that there’s been so much that’s happened in the last couple hundred years that’s made us forget who we are at times,” said Thrush.

“It’s about a generational urge to create new ways of seeing ourselves.”

O’kosi runs about 80 minutes and will be performed from Sept. 22 to Oct. 1 at the Pumphouse Theatre in Calgary.