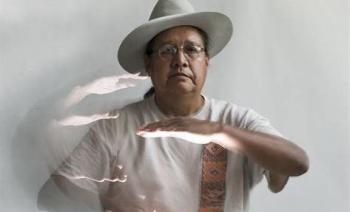 “We would like as much as possible to impart certain techniques and methods for them to take it further, to take it out into their communities. That’s our goal.” — Floyd Favel
By Shari Narine
Windspeaker.com Contributor
POUNDMAKER, Sask.

Floyd Favel considers Plains Indian Sign Language as “very endangered,” but the gestures and motions that comprise the language are still very much in use.  Most people just don’t realize it.

Favel, who is organizing a Plains Indian Sign Language (PISL) camp at Poundmaker Cree Nation in Saskatchewan, says many Cree speakers use the gestures as they communicate with each other.

“Some basic gestures are used, but it’s not known that it’s sign language. It just remains within the spoken language,” he said. “They use it unconsciously.”

Also not known is that PISL forms the basis for American Sign Language. ASL is the primary language of many North Americans who are deaf or hard of hearing.

It was personal interest that moved Favel to organize the PISL camp, which will be held from July 28 to Aug. 2.

“I’ve looked on the Internet. I’ve read about it. I’ve studied it and then I just finally thought to take the initiative and reach out and contact Lanny Real Bird and to make it for ourselves. I’m excited to see its effectiveness as a learning tool and how people can utilize it,” said Favel.

It’s easier to pick up Cree words and phrases when coupled with hand gestures and figures, Favel explained.

Dr. Real Bird of Crow Agency, Montana is one of the few fluent practitioners of sign language left on the Plains. There are approximately 1,000.

Real Bird and Favel produced a YouTube video during the Poundmaker Storyteller’s Festival in 2018, with Favel telling a story and Real Bird signing it. Favel knows about 10 PISL gestures.

PISL has a proud history as a universal language. In a paper written by linguistics scholar Jeffrey Davis, he points out that in the 19th and early part of the 20th centuries, PISL was used “within and between Indigenous groups, who did not otherwise share a common spoken language.”

Favel is also quick to note that it was also used by early frontiersmen and army men for communication with the Plains tribes.

In fact, says Favel, an early sign language conference was held by the Blackfeet Nation in Montana in 1930, hosted by US. Army General Hugh L. Scott. Scott had spent most of his career in the American West and learned PISL. Scott had plans to film the conference and produce a film dictionary, but passed away before completing the project.

PISL conferences have been held sporadically throughout the years in the United States, but Favel believes this is the first such conference to take place in Canada. He hopes it is the first of many to be hosted by the Poundmaker First Nation.

To date, it is mostly those who are instructors in the field of Indigenous language revitalization that have registered to attend. Participants will come from Ottawa, Edmonton, Maskwacis, Winnipeg and Nebraska.

“These are the ones who responded because they recognize the rarity and the specialness of this camp,” said Favel.

However, he stresses the camp is open to all. PISL will be taught using gestures, actions and narratives and not through European literary terms such as conjunctions and predicates, which “confuses” Cree speakers.

It is hoped that participants will leave with a working vocabulary of at least 100 words.

“We would like as much as possible to impart certain techniques and methods for them to take it further, to take it out into their communities. That’s our goal. We don’t want to just keep it for ourselves. We want to use it as a learning tool to spread our languages across this world, this continent. Any tribe can use it,” said Favel. “All knowledge should be shared with everybody.”

Favel, who is also a film maker with Miyawata Films, says the conference will be recorded with the goal to eventually produce an educational piece.

The film, like the conference, are necessary steps in preserving PISL.

“I think as we search for ways to develop and to revitalize and save our Indigenous languages, we need to look for alternative ways of teaching it. Based on what I’ve witnessed and seen, I think the Plains Indian Sign Language is a very effective, and maybe, it’s a revolutionary way to teach and impart languages and phrases that we can use in daily life, (in) conversation,” said Favel.

“We have to do all we can to develop our languages, to revitalize and save them.”

Registrations are still being accepted for the six-day conference.

Those looking for more information or to register can contact Floyd Favel at (306) 317-3097, or through email at miyawata.films@gmail.com.