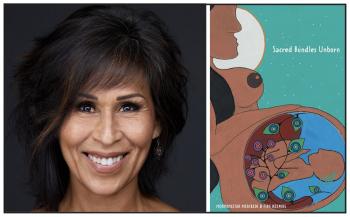 author and editor Morningstar Mercredi with the book cover of Sacred Bundles Unborn.

“Canadians and Canada have been permitted to be docile and ignorant of our lived realties for far too long to the point that we’re dying when we go to health care, hospital. How many lives will it take?” — Morningstar Mercredi
By Shari Narine
Local Journalism Initiative Reporter
Windspeaker.com

It’s “really ironic,” says author and editor Morningstar Mercredi, that it took nine months in 2021 for contributors to Sacred Bundles Unborn to complete their submissions.

“After nine months we gave birth to the book,” said Mercredi.

The irony lies in the subject of the book. It’s about women who can no longer have children because of forced or coerced sterilization.

In 2022, this practise is still legal in Canada, and other countries. It’s something Mercredi and others want to put an end to.

This “ongoing genocide” sees Indigenous women and girls and women of colour at greater risk of having tubal ligations done by the healthcare system without their consent, says Mercredi.

“Canadians and Canada have been permitted to be docile and ignorant of our lived realties for far too long to the point that we’re dying when we go to health care, hospital. How many lives will it take?” said Mercredi, who comes from a “strong line” of Denesoline-Cree-Mi’kmag-Saullteaux-Annishinabe-French-Irish-Scottish women.

Sacred Bundles Unborn is a collection of powerful first-person accounts, both by women who suffered the loss of ever being able to bear children and by women and men who are credentialed and experts in their fields.

But even those professional women spoke “as an aunty, as a mother, as a grandmother, as a sister, as an ally, because what we’re talking about is so sacred, so intimate, so personal, that is the only way we can speak to this. And I think they have done so effectively,” said Mercredi.

Insights are provided by lawyers, midwives, doctors, policy makers, artists and poets, politicians, students, men and women, Indigenous and non-Indigenous, to lend both personal and professional analysis to this topic. The practice of forced sterilization of Indigenous women is not a legacy issue.

“It would be too easy for people to be dismissive, (to say,) ‘Oh those f--g Indians, here we go again. Will they ever put their guilt club down?’ F--k off is what I’m telling them. This is well-rounded, grounded in the stories of the persons who have written them,” said Mercredi.

Mercredi conceptualized the book in 2017 after speaking with Alisa Lombard, lead counsel in a Saskatchewan class action lawsuit brought by women who were forcibly or coercively sterilized.

“Art is activism. My art is my activism, and I knew that it would take a whole community to address this and that I alone as a survivor, I would not be able to adequately speak to this,” Mercredi said.

“That’s the spirit of the book. The synchronicity of the book is such that everything that needed to be spoken to and addressed was done so by each author … I saw that as an editor. I thought that was brilliant and beautiful.”

As a survivor, Mercredi’s chapter, “Mental Health; Living Within Systemic Racism” is a difficult read. She prefaces her chapter with a “trigger warning” as it deals with intergenerational trauma, rape, sexual exploitation and sterilization.

“I never talked about (my sterilization), and I wouldn’t be able to talk about it until I was in my fifties,” writes Mercredi. She articulated to Lombard what had happened over 40 years before.

Lombard also has a chapter in the book where she relates her difficulty during and after childbirth. It’s an intimate look at what drives her as she seeks justice for women who have been wronged. She also writes about the need for informed consent for sterilization; that consent needs to be voluntary and not forced or coerced; and that woman must have the capacity to consent.

Lombard lists the numerous Indigenous organizations that have made motions against forced and coerced sterilization, led by the Native Women’s Association of Canada, and also include the Federation of Sovereign Indigenous Nations, the Assembly of Treaty Chiefs in Alberta, and the Assembly of First Nations.

She also says that since early 2018, numerous presentations have been made to regional and international bodies, including the United Nations, about Canada’s practise of forced sterilization of Indigenous women.

“In my view, if individuals may be investigated, charged and found guilty of offences that violate the right to bodily autonomy … so too should be people in positions of authority, operating with relative regulatory impunity, and being paid by the State, who plead practical blindness, who are robbing marginalized and oppressed Indigenous women of their right to give life on their own terms and in their own time,” writes Lombard.

The only way that changes will come about in a healthcare system that “neglects (Indigenous women) to the degree of death” is when people are held liable, said Mercredi.

She says it’s impossible to rely on the federal government when Prime Minister Justin Trudeau throws out “buzz words” like “culturally safe” and thinks that pamphlets and brochures are the answer.

“The whole premise of culturally safe, what the f--k does that mean? …. That came from the PM when he was forced to address what’s going on. Like that’s going to make a difference or hold anybody accountable. It absolutely has not,” said Mercredi.

Sacred Bundles Unborn is a must read for healthcare practitioners and the general Canadian public, she says.

“It’s a hard read, but if you want a little bit of reality … this would be a good read, very informative. And brilliantly written, I might add. There are some incredible writers. This isn’t technical writing. The prose and the poetry and the storytelling of each author is brilliant,” she said.

It is also a necessary read for people in the Indigenous community. She says people who have gone through severe trauma have a tendency to “go to minimizing, generalizing, dismissing, denying, justifying. This book doesn’t permit that. In that respect … our people need to be made further aware of what we’re already experiencing. This book solidifies that in a very eloquent, respectful, humane, compassionate manner.”

Mercredi expects more women will come forward with their own stories once they read this book.

“I’m aware from my own personal experience with writing the book and with all of the contributing chapters from various authors that it has been very empowering to read the truth,” said Mercredi.  “One of my main objectives is to empower people with the truth of what's ongoing because that is just very important to me, especially with women. It's all about empowering ourselves, empowering each other.”

Sacred Bundles Unborn, published by Friesen Press, is now available on Amazon.com in hard cover, soft cover and Kindle formats, and through Chapters.com in a Kobo e-book format. The book will be formally launched once COVID-19 conditions permit.