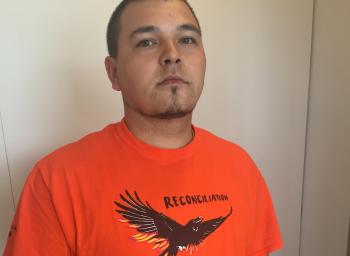 Edwin (Fabian) Frommelt in the shirt he wore to work last year.

“We were devastated by what happened.” — Lyall Woznesensky, vice president of professional development, Quality Foods
By Shari Narine
Windspeaker.com Contributor

Edwin (Fabian) Frommelt may no longer work at the View Royal location of Quality Foods, but his act of courage last year started the Vancouver Island grocery chain on a journey of reconciliation.

“My wife always says to me, there’s a lot of bad things that happen in life … and out of bad comes good,” said Lyall Woznesensky, vice president of professional development for Quality Foods.

“And, I think, out of this bad situation last year, I think our whole staff are much more educated about it and, ironically, even brought more awareness about the whole residential school situation that maybe most people weren’t privy to or understood in any fashion.”

That “bad situation” occurred at the end of September 2018 when Frommelt turned up at work wearing an orange T-shirt instead of his employer-mandated collared shirt with tie.

He was marking Orange Shirt Day, typically held each Sept. 30, which raises awareness and continues the discussion about the impacts that Indian residential schools had on Indigenous peoples across Canada.

The T-shirt had “Reconciliation” written on the front and “Every child matters” written above a feather on the back. Frommelt, who is Cree from the Peguis First Nation, never attended residential school, but has family that did.

What transpired that September day left Frommelt hurt and disgusted. His manager insisted he change out of the orange shirt, because Frommelt hadn’t followed the company’s practise of receiving prior approval before putting aside the company dress code.

Woznesensky, who is stationed at Quality Foods’ head office in Qualicum Beach, said he spoke to Frommelt that day about the manager’s decision. He offered Frommelt the day off with pay, and told him to mark the occasion as he saw fit.

In marking the occasion, Frommelt’s wife Amanda Lynn Delorme took to Facebook and outlined what had happened. People responded with outrage.

“We were devastated by what happened,” said Woznesensky.

“We really believe we’re a good, fair company. We’ve always been community-minded even from our former owners.” (The Jim Pattison Group purchased Quality Foods in 2017.)

“We believe in treating people fairly and equally and, I’ll be honest, to this day it’s left a huge, huge impact on me personally. I’ll take a lot of the blame for what unfolded in that incident,” he said.

Quality Foods also responded using Facebook, posting an apology – twice. The initial apology was “edited in response to comments we received that brought more valid points to our attention.”

One of those points was that the first apology appeared to have put the responsibility squarely on Frommelt’s shoulders.

“What happened there was an interpretation of it in that fashion and it wasn’t meant to be … It was a poorly written letter which is why our president wrote the follow-up letter to apologize for our actions. We never intentionally blamed Fabian for anything,” said Woznesensky.

Quality Foods was flooded with about 130 emails, which Woznesensky responded to personally.

The incident initiated a flurry of activity on the part of Quality Foods, beginning with a letter from President Noel Hayward and posted on Facebook outlining the steps Quality Food would take going forward.

The week following the incident Woznesensky met with Frommelt and delivered an in-person apology. At Frommelt’s request, Delorme was included in that conversation through teleconferencing.

Frommelt doesn’t view the apology as personal as it was made on behalf of the company. He said his request to meet with the store manager over the incident was denied. Woznesensky says he takes the responsibility for what happened.

“Even though (Quality Foods) had put in place things they were going to change, the attitude and stuff towards me had not changed,” he said. “I went to my manager and told him I couldn’t do this anymore. Nothing had really changed. I would finish my day I came in for, but I’m not going to come back after that.”

Frommelt resigned in January 2019. Woznesensky admits that Frommelt’s resignation came “as a shock” as he had encouraged Frommelt to come to him with concerns.

Frommelt had planned to start his own asphalt company later in the year, but he pushed up his timeline.

“It put a lot of stress on us both,” Frommelt said of he and his wife.

“There was a short period of time there where I needed to bring in income and I wasn’t. So I needed to have to rush really quickly through the paperwork and get everything set in stone for the company to be started up,” he said.

Black Bear Asphalt Pavements and Repair employs four people, and all of Frommelt’s employees will be wearing orange T-shirts come Sept. 30. Frommelt has purchased the shirts for his employees, as well as for friends and family.

Employees at the 13 Quality Food stores, the warehouse and corporate office have been told they can wear orange shirts to work, says Woznesensky. Quality Foods will not be providing those orange shirts. They do not provide shirts for other awareness days or campaigns either.

Orange Shirt Day 2019 for Quality Foods will be a culmination of a year of learning that has occurred for store managers and executives, which started with an education session in Comox by Orange Shirt Day creator Phyllis Webstad.

A more recent all-day reconciliation experiential workshop was put on by Kathy Camilleri which, in part, explored in-depth the effects of residential schools and Canada’s assimilation attempts on Indigenous communities.

“It was an emotional one to be honest,” said Woznesensky of the workshop. “I think our guys got a lot out of it. I know I did.”

Shortly after Frommelt’s resignation, the View Royal manager who told his employee to change from his orange shirt also resigned.

“I wouldn’t necessarily make a correlation between the two,” said Woznesensky.