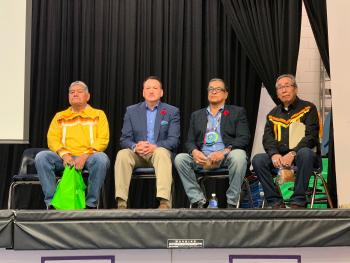 “Treaties with Indigenous people are the foundation of Canada." —Ogichidaa Francis Kavanagh of Grand Council Treaty #3

Treaties Recognition Week is an opportunity for people across the province to learn more about treaties and the ongoing treaty relationships across Ontario.

The minister was joined by Ogichidaa Francis Kavanagh of Grand Council Treaty #3.

“Treaties with Indigenous people are the foundation of Canada; honouring and upholding these sacred and everlasting commitments should be the upmost importance to all Canadians,” said Kavanagh.

“I am pleased to participate in the initiatives held during the 3rd annual Treaties Recognition Week, which I hope will foster greater awareness and serve as a reminder of our relationship to our treaty partners.”

“As a nurse, lawyer, and former federal Cabinet minister who lived in and worked with First Nation communities, I’ve seen first-hand the importance of making modern treaty relationships real and more meaningful for Indigenous and non-Indigenous peoples alike,” said Rickford.

“Promoting awareness and understanding of the significance of treaties helps to advance us along the road to reconciliation, and puts us on a path to a future of social and economic prosperity for all Ontarians.”

To complement the events, the government launched an online map of Ontario treaties and reserves to help people learn about the treaties to make it easier to see where First Nation communities are located in Ontario. The province is covered by 46 treaties and other land agreements.

The government is working with Indigenous partners to facilitate discussions in schools and other locations open to the public. Participants can deepen their understanding of treaties directly from Indigenous Elders and Knowledge Keepers.

“By increasing understanding of treaty agreements, we are moving towards reconciliation with Indigenous people and creating fair and respectful relationships,” said Ross Romano, parliamentary assistant to the minister.

“There is a growing interest for education on the significance of treaties and how these agreements remain as meaningful today as they were then. The Anishinabek Nation is proud to create resources that promote treaty awareness and education in all school boards throughout Ontario,” said Hare.

Treaties Recognition Week is celebrated annually during the first full week of November and runs to Nov. 10 this year.