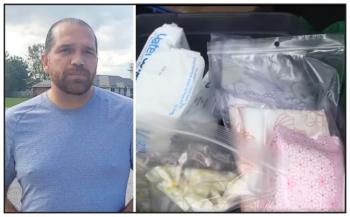 “We're working on a whole-of-community approach and I’ve been talking with our mental health and addictions people and our health centre, as well as other departments, and making sure that we have a holistic approach to this.” — Kettle & Stony Point First Nation Chief Jason Henry
By Colin Graf
Local Journalism Initiative Reporter
Windspeaker.com

A new healing lodge to help First Nations people in southwestern Ontario deal with addiction problems is scheduled to open next spring at the Kettle & Stony Point First Nation on the southern shore of Lake Huron.

The lodge, with land-based activities operating alongside modern and traditional medical services, will replace a facility closed in 2016 at another First Nation in the area. Other efforts, including provision of materials to reduce dangers for drug users, have already started this fall, according to Kettle & Stony Point First Nation Chief Jason Henry.

The new lodge will enable those battling addiction to “reconnect with former knowledge that was taken away with residential schools and forced removal from our territories,” Henry tells Windspeaker.com.  “We want to get people back in touch with hunting, fishing, basic land skills, and learning their culture and spirituality.”

Medical services are a vital part of the plan. “When you’re talking about interventions for opioid problems, you have to have that,” Henry explained. Permanent staff will be hired, with a focus on the medical side although social workers and “cultural staff” will be part of the mix.

Henry says chiefs from across the region have been working on securing funding and a new location for the healing lodge since it closed in 2016. The former lodge shut down after management conflicts ended its 18-year operation at the nearby Munsee-Delaware Nation, according to news reports at the time.

The new facility will be created in partnership with Atlohsa Healing Services of London, Ont., and will feature a mix of residential and day programs for First Nations people, on- or off-reserve. A possible location at the former Kettle Point Park is being considered.

Modular buildings will be erected at first for washrooms and a kitchen, with bricks and mortar possible in the future. However, Chief Henry emphasizes “we want people to be living on the land in wigwams or tipis, not living in an institution.”

Prior to opening the lodge, harm reduction efforts at Kettle & Stony Point have already begun, with distribution of clean, free supplies, including syringes, sanitary wipes and Naloxone kits to help community members.

“It will be a weekly ongoing thing and it will grow,” the chief says. Naloxone, also known as Narcan, can be safely administered, often as a nasal spray, by most people if they suspect someone is losing consciousness from an overdose.

The service, operating with help from the North Lambton Community Health Centre, will make it easier for those suffering from addiction to ask for help, and lower the stigma associated with drug use, said Henry.

Harm reduction also involves making sure people have connections to primary care and different community supports, said Karen Lichty, registered nurse with the centre at the program’s launch. The work “can help build a bridge and build trust and support the client and support the community,” she explained.

While harm reduction workers began handing out materials in a parking lot, residents can also expect to see people “moving around in the community” handing out supplies, Henry said in a community video update.

Employees are also working with local medical personnel to bring opioid substitution to the community in late November or early December, Henry explained. The service, which uses more benign substances such as methadone or suboxone to take the place of opioids, such as prescription pain relievers, fentanyl or heroin, is already available, but involves travel away from the First Nation, he said.

A pilot program will “absolutely” be starting soon at Kettle & Stony Point, he says. The chief also hopes to eventually bring a withdrawal management facility to the community, and although “it’s a stretch” possibly have a safe supply location where substances can be provided to users without fear of contamination.

Henry knows that can be “a bit controversial,” but it “cuts the dealers out” and “gives people a path” toward recovery.

The chief also hopes to involve community volunteers in the harm reduction program.

“It’s time to stop focusing on the problem and really get down to the solution,” he said in his video update. “We are going to involve everybody in the community with solving this problem.”