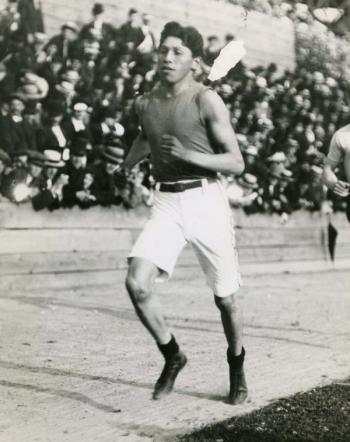 Tom Longboat digital assets among the 800 brought together for the Canadian History and Society: Through the Lens of Sport online exhibit.

A new online exhibit launched by Canada’s Sports Hall of Fame includes a handful of segments related to the Indigenous sporting history of the country.

The exhibit, which went online in late December and is free to the public, is titled Canadian History and Society: Through the Lens of Sport.

The entire exhibit can be viewed at http://www.canadasports150.ca.

The project was funded in part by the Virtual Museum of Canada. Eight museums across Canada donated a total of more than 800 digital assets to help create the exhibit.

The new project features a total of 14 mini-documentaries, as well as 16 webisodes that were created for the online exhibit.

Each mini-documentary is about five minutes long. And the webisodes are between two to four minutes in length.

“I think it’s one of the most comprehensive exhibits that has been created,” said Janice Smith, the hall’s CEO and interim president.

The exhibit features numerous significant Canadian athletes and moments in the country’s sporting history dating back to 1867.

The content is designed to be an interactive tool for people of all ages, including educators and their students.

There’s also a webisode focusing on Longboat’s running career, including mentions of the Ward Marathon Trophy he won a few times in Toronto, as well as the Tom Longboat Awards, named in his honour and presented to the top Aboriginal athletes in the country.

Sharon Firth is also the narrator for the mini-documentary on the Arctic Winter Games, which is part of the Major Sporting Events theme.

Another Indigenous runner featured in the Sport Veterans category in the Military and Sport theme is Cree endurance runner Alex Decoteau. Besides being known for running, Decoteau was also the first Aboriginal police officer in Canada in 1909.

A webisode on Decoteau’s pocket watch is included in the exhibit.

And yet another Indigenous connection in the exhibit is the sport of lacrosse. Its history is included in the Five Sports Invented In Canada section, which is part of the Canadian Firsts In Sport theme.

Smith believes some Indigenous youth across the country who haven’t heard of Longboat, the Firths or Decoteau will have some new sporting heroes after learning about these athletes of yesteryear through the exhibit.

“I would hope so,” she said. “These people are very important to our sports history.”

Smith is also hoping those that visit the online exhibit will spend plenty of time there and find it entertaining.

“There’s something viable for everybody to go through,” she said.

“We certainly hope that will be the case,” she said.

The hall, founded in 1955, was originally located in Toronto.

But since 2011 its home has been in Calgary, inside WinSport’s Canada Olympic Park. The 40,000-square foot facility features 12 galleries.

And the hall of fame’s collection includes about 100,000 artifacts.

Smith, however, said it is impossible to speculate just how many people will go online to view the hall’s new exhibit. But hall officials will be doing their best to bring awareness of its existence.

“Part of our mission is to share this exhibit with educators we deal with,” she said.

Smith added she’s thrilled she was able to travel to the Northwest Territories town of Fort Smith in early 2016 to be a part of the delegation when a mini-documentary was created. During this four-day trip officials gathered footage and videotaped other segments for the Arctic Winter Games mini-documentary.

“It was just an awesome experience,” she said.

The Arctic Winter Games, first held in 1970, is a biennial event which features athletes from the circumpolar north.

“We just felt the Arctic Winter Games is an important sport,” Smith said. “We felt it was extremely important to include it in this exhibit.”

While in Fort Smith, hall representatives were introduced to Peter Daniels, who is not only a coach but also a historian of Dene sports, included in the Arctic Winter Games.

“He can speak to the significance of the Games,” Smith said of Daniels. “He told us some amazing stories.”

Also on hand was Fort Smith’s Meika McDonald, who is an Arctic Winter Games legend. McDonald participated in a total of 10 Games, winning 34 medals, including 14 gold.

Since 2007 McDonald has sat on the Arctic Winter Games’ international committee.