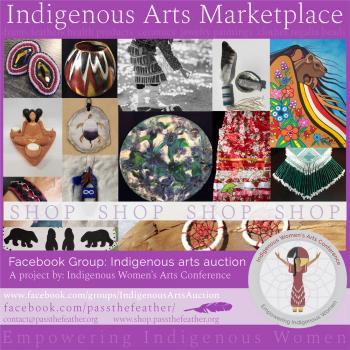 A new virtual auction for Indigenous women artists is providing them economic freedom and bringing contemporary Indigenous art to a larger audience than ever before, according to the creator Dawn Iehstóseranon:ha.

Iehstóseranon:ha, founder and president of the Indigenous Arts Collective of Canada (IACC), says she was inspired to create the online marketplace on Facebook to help Indigenous artists facing devastating losses of income due to COVID-19 restrictions.

“The mandate of this organization is to project the image of Indigenous women as strong and cultural, and this [the Indigenous Arts Marketplace] is part of that mandate,” said Iehstóseranon:ha.

Iehstóseranon:ha had originally planned a physical conference to be held in Ottawa, and had secured a combination of funds from the Ontario Arts Council, the Canada Council for the Arts and Heritage Canada to help with costs.

But after numerous festival and outdoor market cancellations, including her own conference, she worried about the funding running out before she could reschedule an alternative event that would provide artists an opportunity to sell.

Particularly because it’s for Canadian audiences, as opposed to other online initiatives based out of the U.S. where competition is higher.

“Having a market that’s primarily made up of Canadian sellers is a big deal because a lot of the online communities are very U.S. focused, and they’re also much bigger.”

Martens-Forrester says not only has she had a fair number of sales, but the online auction format allows for even higher prices that accurately reflect the cost of labour and skill levels of different artists.

However, the online auction has not been without issues from both would-be sellers and buyers.

Iehstóseranon:ha says that she has had to track down some bidders who refused to pay once the auction was closed, which hurts artists who then have missed out on other buyers and sales.

She is also now closely monitoring member applications from potential artists because of appropriation, vetting credentials and their claims of being Indigenous.

“The really big one is ‘I’m really connected to your culture. I live near Métis people/Indigenous people and I’ve learned from them how to do this but I’m not Native,’ said Iehstóseranon:ha, pointing out that she’s turned down such applications.

While Iehstóseranon:ha says she’s not against any artist who has a true appreciation for Indigenous art, she says her online auction is meant to cultivate the works of Indigenous women artists who are already marginalized.

And in a time where the repatriation or reclamation of Indigenous art in Canada is being discussed, Martens-Forrester is thankful that the auction is strict on its membership, saying that it allows Indigenous artists to take financial ownership of their art by not having to go through third party sellers and lose out on profits.

“[The auction is] giving Indigenous people power over how their art is sold to the public and marketed, and ensuring that the items being sold are Indigenous made, not ‘Native inspired’,” said Martens-Forrester.

Iehstóseranon:ha says many of the items being auctioned by artists are not “traditional” pieces of art, but they are all items with cultural influence.

According to Iehstóseranon:ha, this makes the auction stand out, because it shows that these artists and the Indigenous communities they come from not only still exist, but are evolving and growing.

With bidding open every Friday to Thursday, sellers can post their wares onto the auction. The Facebook page is run and monitored by Iehstóseranon:ha,

According to Iehstóseranon:ha, the auction group has tripled in membership in the past few months, and the page has reached 31,000 likes.