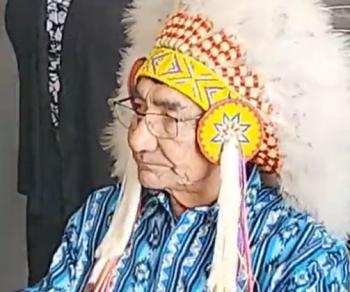 “As nations we are deeply concerned that the state of Canada has let such an unconstitutional bill move forward unchecked and has stated it will only monitor its implementation and its path.” — Okimaw Henry Lewis
By Shari Narine
Local Journalism Initiative Reporter
Windspeaker.com

In a news conference on Dec. 19 at the River Cree Resort, Okimaw Henry Lewis announced that the Nation had filed a statement of claim in the Alberta Court of King’s Bench in Edmonton that morning.

“We want to send a message to the premier and…the Alberta government that these lands are treaty lands and this law directly infringes upon our treaty number six which is why we decided to take legal action,” said Lewis.

Bill 1, the Alberta Sovereignty within a United Canada Act, was passed after limited debate and given royal assent on Dec. 15.

The Sovereignty Act had been the cornerstone of Smith’s campaign when she ran for leadership of the UCP after leader and premier Jason Kenney stepped down. Smith pitched the bill as a means of preventing Ottawa from stepping into provincial jurisdiction.

However, the act was changed significantly from what originally was brought to the legislature. It faced widespread criticism for giving Smith and her Cabinet extraordinary power. Initially it had the legislature responding to federal legislation, regulations or policies deemed harmful to Alberta and then allowed Cabinet to make further changes behind closed doors. Smith claimed that had not been her intention. Now any legislation dealing with federal concerns must run the normal course and be passed by the legislature.

“Most significantly within the context of this recent enactment, the Alberta Sovereignty Act was enacted wholly without input, consultation or consideration with…Onion Lake’s concerns, again contrary to the spirit of treaty,” said Michael Marchen of Hladun and Co., legal counsel for Onion Lake.

Lewis outlined the numerous steps Onion Lake had taken to inform Smith they had concerns, including sending a letter asking her to withdraw the bill and to discuss its potential impacts with Onion Lake. There was no response from the premier’s office.

Onion Lake, which straddles the Alberta and Saskatchewan border in Treaty 6, also joined with other First Nations at the Assembly of First Nations Special Chiefs Assembly in early December to pass an emergency resolution condemning both the Sovereignty Act and Saskatchewan’s Bill 88. The Saskatchewan First Act asserts the province's exclusive jurisdiction in the areas of exploration of non-renewable natural resources, the development, conservation and management of renewable and non-renewable resources, and the operation of sites and facilities to generate electricity.

The emergency resolution called for the Scott Moe Saskatchewan Party government and the Alberta government to “immediately engage in meaningful and respectful dialogue on resource revenue sharing, so that First Nations benefit from the resource wealth in their respective traditional territories.”

When Smith finally met with the Confederacy of Treaty 6 chiefs it was after Bill 1 had received third reading and, said the chiefs in a statement, “It was clear from our discussions that Premier Smith does not understand Treaty or our inherent rights nor does she respect them.”

“Onion Lake Cree Nation states within this claim that this complete lack of consultation with respect to the Alberta Sovereignty Act constitutes a breach of its treaty and its constitutional rights independent of any of the other breaches and infringements that may occur as a result of the enactment of this legislation,” said Marchen.

Marchen stressed that no time prior to the introduction of Bill 1 on Nov. 29 through to third reading on Dec. 7 was Onion Lake leadership or its people consulted.

The six-page document filed in court Monday morning states, in part, that the Sovereignty Act as a whole infringes upon the rights guaranteed to Onion Lake Cree Nation through Treaty that was signed with Canada.

It further states that through the Sovereignty Act, Alberta is “wresting control” from Canada.

The act, says the claim, goes beyond the scope of the province by directly impacting reserve lands which fall under federal jurisdiction.

“The Alberta Sovereignty Act is utterly repugnant to the letter and spirit of the Treaty,” says the statement of claim.

The Onion Lake Cree Nation is asking the court, in part, for temporary and permanent injunctions declaring the Alberta Sovereignty Act, whole or in part, “inoperative” against the Nation and its people.

Lewis expressed disappointment that Canada was not engaging with Alberta over the Sovereignty Act despite comments from Prime Minister Justin Trudeau that he was “extremely concerned” about what the legislation was saying "in terms of challenges to treaty rights that are fundamental in Canada and need to be respected."

“As nations we are deeply concerned that the state of Canada has let such an unconstitutional bill move forward unchecked and has stated it will only monitor its implementation and its path,” said Lewis.

In a brief statement to Postmedia, Becca Polak, Smith’s press secretary, said the premier’s office does not comment on ongoing litigation.

However, she wrote, “The Alberta Sovereignty Within a United Canada Act is constitutional and does not interfere or undermine Indigenous and treaty rights.”

The Sovereignty Act states that nothing in the act is to be “construed as abrogating or derogating from any existing aboriginal and treaty rights of the aboriginal peoples of Canada that are recognized and affirmed by section 35 of the Constitution Act, 1982.”

The province has 20 days to file a statement of defence.

The Confederacy of Treaty 6 chiefs sent Windspeaker.com this statement: