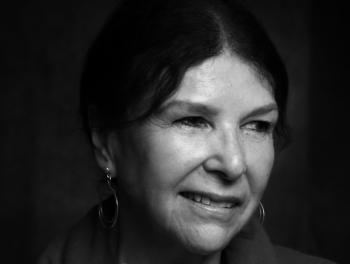 “And there came a point when I was a young girl and I realized how bad the system of education was. That’s the time I revolted. I didn’t know what to do.” — Alanis Obomsawin
By Sam Laskaris
Local Journalism Initiative Reporter
Windspeaker.com

Alanis Obomsawin has always had a soft spot for the Toronto International Film Festival (TIFF).

Obomsawin, the 89-year-old Abenaki Nation member who is regarded as one of the country’s most distinguished filmmakers, was once again back at a familiar place.

She was in Toronto this past weekend as one of the honorees of the 2021 TIFF Tribute Awards.

Obomsawin was selected as this year’s recipient for the Jeff Skoll Award in Impact Media. The award recognizes leadership in creating a union between social impact and cinema.

Obomsawin has had an incredible career, producing 53 films, almost one per year since the last 1960s. The majority of her films chronicle the lives and concerns of Indigenous people.

“I’m always very touched by the recognition I get here,” Obomsawin said at the TIFF Tribute Awards press conference on Saturday. “And TIFF is like a family. I am very honoured to be here.”

Obomsawin said the first ever festival she attended was in Toronto in 1984 when it was called the Festival of Festivals. It was renamed TIFF in 1995.

Obomsawin was born in the United States on Abenaki territory in New Hampshire. But when she was just six months old her family moved to Quebec and she was raised there.

The TIFF Tribute Awards were recorded and will air this Saturday, Sept. 18, during the final day of the festival. The awards will be shown at 7 p.m. EST on CTV. They’ll also be available for viewing on CTV.ca as well as the CTV app.

At Saturday’s press conference Obomsawin talked about the longevity of her career and why she decided to become a filmmaker.

“I can only be very thankful that I have lived this long because, for many generations as everybody knows, it was very difficult for our people, for all of us,” she said. “And there came a point when I was a young girl and I realized how bad the system of education was. That’s the time I revolted. I didn’t know what to do.”

“What can I do to influence (others) to stop talking about us like that, with a license, teaching young children to hate us,” she said. “All around, it didn’t matter who we were, where we were, what was happening, it was all very negative. When I realized it was the books, I thought I’m going to do something about this.”

Besides being a filmmaker, Obomsawin is also a singer, artist and activist. She began working for the National Film Board of Canada in 1967.

Besides recognizing her with a TIFF Tribute Award, festival organizers also honoured Obomsawin this year with a platform titled Celebrating Alanis. A total of 19 of her films are being shown for free.

This retrospective also includes Obomsawin’s newest short film titled Honour to Senator Murray Sinclair, which profiles the chair of the Truth and Reconciliation Commission, which examined the legacy of the Indian residential school system.

“It’s a true gift to know Alanis as a friend and through her films,” said series curator Jason Ryle. “Her works are imbued with tenacity, dignity and love in equal measures and they have been transformational across nations.”

After working as an advisor for the NFB, Obomsawin directed her first documentary in 1971, titled Christmas at Moose Factory.

One of her best-known films was Kanehsatake: 270 Years of Resistance which came out in 1993. This feature-length film documented the 1990 resistance in Kanehsatake and Oka.

“Her astonishing legacy continues to grow with each year and with each new film in her long career,” Ryle said. “Within the global Indigenous community she is a beacon of our pride and a symbol of the power of film to change the world.”

TIFF’s artistic director Cameron Bailey was also pleased to include Celebrating Alanis in this year’s festival.

“Alanis Obomsawin is often described as an activist filmmaker,” he said. “Alanis’s body of work focuses on discrimination and injustice, but also on Indigenous strength and resistance. It is an honour to celebrate her work with these 19 films in the retrospective.”