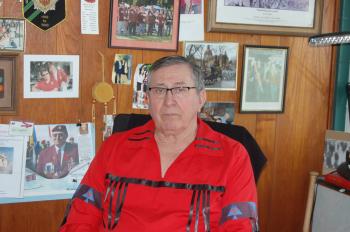 “It’s a shock that any child can die in care, but it’s more of a shock when we make up such a small number of people in the community.” — Donald Langford
By Shari Narine
Windspeaker.com Contributor

Alberta’s Office of the Child and Youth Advocate (OCYA) released its first mandatory review of the circumstances surrounding the deaths of children who died while in provincial care, or who died within two years of being in care.

In the six months between April 1 and Sept. 30, 2018, there were nine deaths investigated by OCYA, eight of whom were Indigenous children.

Provincial legislation makes it illegal for these children to be named.

“That’s been my greatest fear and anxiety over the years,” said Langford. “They don’t allow our parents to properly say goodbye to the spirit of their children, because they can’t name them.”

The report is the first one delivered by the OCYA since Bill 18. The Child Protection and Accountability Act was proclaimed in March 2018. That Act, layered over existing OCYA legislation, mandated the OCYA to issue a public report on all deaths of youth and children in government care or within two years of care. Previously, the OCYA issued public reports on systemic issues, which sometimes involved deaths.

While the report includes nine children’s deaths, there were actually 11 children who died within the timeframe. The OCYA was not able to investigate two of the deaths as a police agency or a Crown Prosecutor asked the OCYA to hold off, concerned that an OCYA investigation could make it difficult for the criminal investigation to proceed.

Advocate Del Graff said he does not know if the two investigations that have been put on hold involve Indigenous youth.

Graff says he is concerned with the high number of Indigenous youth who died in care in that six-month period.

“The challenge I have is I don’t know that we can make it generalizable to the future… it doesn’t have a predictive value that says there’s always going to be that proportion of young people who are Indigenous who pass away in care,” he said.

However, he points out, the number of Indigenous youth who are involved in the child intervention system is not going down.

In 2016, OCYA released a special report on Indigenous children in care. Graff says that from 2015 to 2018, the number of Indigenous children receiving child intervention services, whether still in their homes, temporary care or permanent care, had increased. Those who received permanent care, “the most intrusive level of care,” he said, increased from 73 per cent in December 2015 to 76 per cent in December 2018.

“It’s gotten a little worse in terms of the over representation of Indigenous kids in care, of the proportion that were in care. That’s concerning. I think about this an awful lot. I’ve seen efforts made to try and change this, but in the actual metrics it looks at least in December … it was, in fact, getting worse,” said Graff.

Langford knows the numbers well, having worked in the system for decades.

“It’s a shock that any child can die in care, but it’s more of a shock when we make up such a small number of people in the community,” he said.

According to provincial statistics (taken from the 2011 National Household Survey), Indigenous children account for approximately 10 per cent of Alberta’s youth population (those 19 years and younger).

Langford likens the lack of improvement in the number of Indigenous children in care to the recently released final report from the National Inquiry on Murdered and Missing Indigenous Women and Girls.

“It’s just talk. Lots of meetings, but no action. They didn’t accomplish anything,” he said.

As long as Indigenous people – whether women or children – continue to be “second best or third best agenda items” nothing will change, he said.

This newest report sets out five recommendations, ranging from better processes in foster homes to financial support to allow front line workers better access to experts. The children who died ranged in age from three months to 18 years.

The report also suggests that a public fatality inquiry may be beneficial in the death-by-suicide of “Nova,” a 16-year-old First Nations girl.

“Part of the changes to Bill 18 also includes that the fatality review board needs to consider our reports when they’re making decisions to do a review of children in these circumstances. That’s why we said we would like for them to consider it. We identified some areas of questions that still remain and suggested that they consider,” said Graff.

If the fatality review board decides not to hold an inquiry, the issues raised – including the extensive number of emergency room visits (an issue flagged in previous OCYA investigative reports)– could be examined by Alberta Health Services, he said.

Graff says he continues to be optimistic that the OCYA’s recommendations will be implemented, although this report does reference “repeatedly making similar recommendations.”

“Jaxon”, a 17-year-old First Nations boy, whose death is also included in this report, died by suicide, like Nova. In March 2016, the OCYA did a special investigative report addressing the challenges of indigenous youth suicide.

The Child Protection and Accountability Act requires the government departments that have been singled out by recommendations from the OCYA to respond within 75 days.

In a statement to Windspeaker.com, Minister of Children’s Services Rebecca Schulz said her department would “immediately begin reviewing the Advocate’s report and my department will meet with him to better understand these recommendations…. Our government will provide services, supports and resources to protect vulnerable children, and to improve that system when required.”