Nothing is forever, even pain, says singer-songwriter 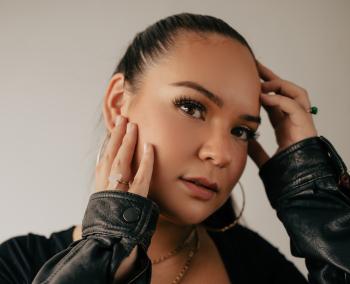 “The reason that I like to sing is to help people feel connected. Even though they might be feeling super alone, like they don’t have anyone, if they listen to music, it's a way to feel a connection.” — Hayley Wallis
By Rebecca Medel
Local Journalism Initiative Reporter
Windspeaker.com

Hayley Wallis considers herself to be an emotional singer. When she initially started singing covers, she could only sing songs that she genuinely felt inside.

Now the 30-year-old has released her first single called “Coffee Cup”. It’s a vulnerable look into what the day-to-day struggles of someone encountering depression are like, including seeing that coffee cup that sometimes stays on the dresser for days.

“I need to connect,” Wallis said. “Especially when it comes to my own music, I needed to sing something real and honest; something that I actually fully felt.”

Wallis didn’t start pursuing music professionally until last year and said she sat down and wrote and recorded “Coffee Cup” within a couple of hours. The single has been climbing on the Indigenous Music Countdown from 40 to 33 as of this publishing.

When it comes to songwriting, Wallis said it’s something she has to do in the moment while she’s feeling the emotions. And this song has a message of hope that she thinks will help her listeners as well.

“I wrote it as a message to myself in the sense that I was always told that nothing is forever, even pain. Everything is going to pass eventually. So this song was me writing to myself,” Wallis said.

“And when I’m thinking about other people listening to it, I’m hoping that they feel that it’s someone singing to them, letting them know that there's a time that it’s going to be over. It’s not always going to be this way. There is a light at the end and you really do owe it to yourself to feel happiness, to feel joy, to feel love and to feel all the other things that are the total opposite end of the spectrum of depression.”

Growing up on the remote Island of Klemtu in BC as part of the Kitasoo/Xai’xais Nation and living in a community of 300 people meant there was always someone around to talk to. But when Wallis moved to Vancouver in 2018, she felt more isolated.

“When you’re in a community like my home, although it’s so small, you're never alone. There’s always something going on. There’s always someone knocking at your door to either bring you some freshly harvested seafood or to invite you to an event because we are a super tight-knit community and we’re always surrounded by people,” Wallis said.

“Moving to Vancouver hit me really hard because I didn’t have that anymore. Finding a counsellor was more difficult because in my community we only had one and everyone knew this person. But in Vancouver there’s so many barriers. You have referral processes and so many counsellors to choose from. You have to take transit across the city to get there. You feel so much more disconnected. So I feel like in terms of my mental health, it definitely was better when I was back home.”

The COVID-19 pandemic has only intensified mental health issues for many people and Wallis said for those who were struggling with depression previously, the restrictions and isolation brought on by COVID have made it 10 times more intense.

“There’s a whole plethora of new issues that people are experiencing,” Wallis said. “But I’m just hoping that they see the message [in this song] that you deserve to be happy and you do owe it to yourself. And although it might take a little bit of work, it’s well worth it.”

Wallis has two young children and has an ambition to see all Indigenous youth succeed, feel motivated, and feel loved. She said she’s noticed differences in struggles for the Indigenous youth of her home community and those from Vancouver, but that’s led her to think about what could help.

“I think for the youth on the res it’s so hard for them to get off to go to college or university because when they do it’s an extreme culture shock. It’s so different; it’s so much more intense. So being able to know their resources and where to pull from so that they feel supported and the same sense of community that they did on the reservation in the big city will help. And for the Indigenous youth in the urban community, just finding your little communities—creating your own community even. Community is key for our youth.”

The community Wallis found in Vancouver was with other artists. She said there is so much more opportunity for Indigenous artists these days than when she was younger and that the artistic and musical community is incredibly supportive of one another.

“The reason that I like to sing is to help people feel connected. Even though they might be feeling super alone, like they don’t have anyone, if they listen to music, it's a way to feel a connection. Music is a way to feel something that someone else is feeling and being supported that way.”

Wallis is releasing her debut EP this spring. She’s written six songs already and is excited to debut new music that showcases her ability to storytell and to dream.