No stopping the framework, says Minister Bennett, but she’s listening 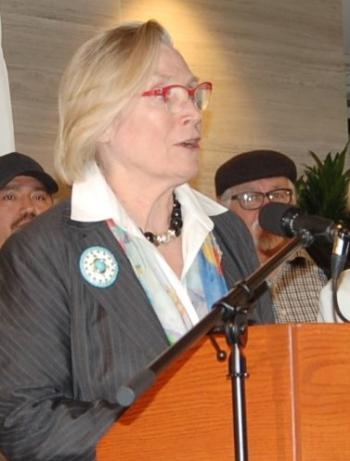 Crown-Indigenous Affairs Minister Carolyn Bennett says she has no plans to reset or halt the work her government began this past spring on the Recognition and Implementation of Indigenous Rights Framework. What she does commit to is listening.

“We had some very strong comments at the (Assembly of First Nations) meeting in September that continues to inform our thinking and how we go forward in a true partnership, co-developing. That’s what we’re aiming to do,” she said.

On Feb. 14, Prime Minister Justin Trudeau announced in the House of Commons his government’s intention to put in place “new legislation and policy that will make the recognition and implementation of rights the basis for all relations between Indigenous Peoples and the federal government going forward.

“The Framework can also include new measures to support the rebuilding of Indigenous nations and governments, and advance Indigenous self-determination, including the inherent right of self-government.”

Trudeau’s plan had a strict timeline: Consultations over the spring, legislation to be tabled by the end of this year, and the bill to be passed into law before the October 2019 election.

As the consultation process unfolded, so did the heavy criticism. Criticism first involved the quick and limited consultation period, as well as the way the government was driving the framework agenda with specific questions to be answered by participants. The content of the draft proposal also came under fire. Then came the criticism that the government was only publicizing comments from consultations that served to further its own agenda.

Criticism has been widespread. Chiefs from both ends of the country have responded.

“We’ve been at this for a long time. We’re pretty clear about what we want,” said Neskonlith Chief Judy Wilson, secretary-treasurer for the Union of British Columbia Indian Chiefs.

She says that consultation sessions she attended had First Nations ignoring the government’s prepared questions and talking about their own issues.

The First Nations Leadership Council (consisting of the political executives of the UBCIC, First Nations Summit and BCAFN) prepared a document of principles and recommendations, stressing the need for the process to be co-developed by First Nations.

The UBCIC passed a resolution in early October that concluded that if the final framework did not reflect the changes the BC chiefs wanted, an “action plan for the UBCIC members and the BC region’s consideration to challenge and oppose any unilateral federal version of the RIRF policies or legislation” would be prepared.

At the AFN’s Special Chiefs Assembly in July Ontario chiefs introduced a resolution calling for a halt to the process stating that the framework “and associated processes undermine the true Nation-to-Nation relationship between First Nations and Canada.”

The resolution went on to “insist that Canada participate in a First Nation-led negotiation.” That motion was passed, but with 21 objections and four abstentions.

In response, the Association of Iroquois and Allied Indians developed 13 principles focusing on kindness, respect and sharing and “derived from the inherent and unextinguished rights and jurisdictions of First Peoples and Nations.”

The AIAI says the only way the process can move forward is for joint principles to be developed bilaterally with Canada. As it stands now, they say, the federal government’s framework is a threat to inherent rights. The AIAI is visiting Ontario communities to spread their message. The group has developed a website for interested parties to view the AIAI perspective. Stop The Framework can be seen here: https://www.stoptheframework.com/

Academics from across the country were also critical.  The Yellowhead Institute, a new Indigenous think tank housed at Ryerson University, in Toronto, produced its first report on the framework authored by institute director Hayden King. Assistant professor of Political Science at the University of Calgary, Gina Starblanket wrote an op-ed piece stating her concerns. Both Hayden and Starblanket see the proposed framework as self-serving.

Speeches given since by Justice Minister and Attorney General Jody Wilson-Raybould, says Starblanket, claim that the new framework creates “certainty.” But Starblanket argues that certainty is for the federal and provincial governments as well as industry, in creating minimum standards that must be met when proposing development.

“What certainty does is that it forecloses on the opportunity for (Indigenous peoples) to seek a declaration of title where one might not have existed before or seek some form of affirmation of our rights through courts, as those things are becoming more and more common. We’re seeing more support for Indigenous title in different areas and I think that creates a certain level of uncertainty for the federal and provincial governments when they’re trying to know what their basic bare legal obligations are toward Indigenous people,” said Starblanket.

A group of prominent Indigenous legal experts – former commissioner for the Truth and Reconciliation Commission Wilton Littlechild, law professor at the University of BC Mary Ellen Turpel-Lafond, and Grand Chief Ed Johns – sent a letter to Trudeau in late August stating “it is our view that this initiative as it is emerging must be reconsidered and be reset on a clear and proper legal foundation, with proper mechanisms for the full and effective engagement of Indigenous peoples.”

The legal experts pointed out what many other Indigenous peoples have argued: “From our perspective, the initiative fails to appreciate or understand that legal rights have already been recognized by the Courts in Canada in a multitude of cases where inherent Aboriginal and Treaty rights have been consistently affirmed for Aboriginal peoples and Treaty First Nations people.”

While criticism of the process and the framework has been overwhelmingly vocal, there are those who support it – as proven by the 21 objections to the resolution at the AFN’s Special Chiefs Assembly.

Bennett also points out that there are “many, many groups particularly in the Northwest Territories and the Yukon, they want some foundation to protect and to hold Canada to account on the agreements they’ve signed. The Métis are very clear they want a foundation so nobody can roll back their hard fought for rights.”

She also says that there is widespread agreement “for an overhaul” of the comprehensive claims, inherent rights, and specific claims policies.

“We are listening so we want to get this right, as the prime minister said. And we’re going to get it as close to right as we can,” said Bennett.