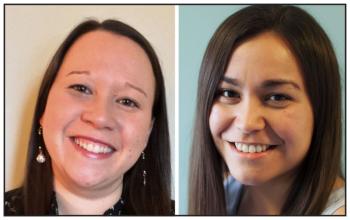 The incoming co-chair of the National Aboriginal Council of Midwives (NACM) would like to see First Nations exercise their inherent rights and stop waiting for federal government funding or provincial and territorial changes in legislation and regulations before they fully embrace midwifery in their communities.

“There is a movement toward self-regulation that we don’t necessarily have to have a wish list for the government to do right away, because communities are recognizing they can do it now,” said Alisha Julien Reid.

“I think with our inherent rights and working toward sovereignty, we have to move forward without waiting,” said Reid, who is Mi’kmaq from Millbrook First Nation in Nova Scotia and works as a registered midwife.

Returning NACM co-chair Claire Dion Fletcher says these “pockets of funding” may help to move midwifery forward, but they do little to make permanent changes.

“We need substantial sustainable funding that takes into consideration the role of the midwife, along with the infrastructure a midwife needs to work,” said Fletcher, Lenape‑Potawatomi and mixed settler, who is a registered midwife working and living in Toronto.

“There’s different kinds of relationships that can be built, partnerships that can be made with allied health professionals, with community health centres, with universities, with regulatory bodies. There are different ways to work within the current legislation,” said Fletcher.

Both women stress that NACM’s role is not to suggest how communities may choose to move forward with midwifery.

“We’re not promoting a roadway to do things but communities are recognizing they don’t have to wait for regulations and legislations to give their midwives permission because there is accountability…systems in place in every community that we can encourage what’s already happening,” said Reid.

Even if the funding isn’t fully there to ensure midwifery services in First Nation communities, the importance of such services is recognized by governments.

“In every government portfolio, whether we’re talking about child apprehension or intimate partner violence or health racism, midwifery keeps bubbling up to the surface as a solution in all of these different areas. It’s a solution… because it touches so many of the problems,” said Reid.

As an example, she points to Indigenous midwives being able to advocate for their patients because they’ve been in their homes and know their children are safe.

Indigenous midwives provide care beyond birthing and in so doing develop a relationship with the woman and her family. Midwives are with the woman for her full pregnancy and six weeks after she gives birth.

But more than that, says Fletcher, Indigenous midwives promote care in a manner that allows women to understand that they alone control their bodies.

This “different and deeper understanding of rights and responsibilities … moves into other areas of health and well being,” she said.

Indigenous midwives’ broader scope includes sexual and reproductive health, and not just for women who are pregnant.

Yet, it remains difficult to get Indigenous midwives into Indigenous communities.

There are only six universities across the country that provide the four-year degree program and that means Indigenous students have to move away from their community and their support group.

On top of that, provinces and territories have different legislation and regulations controlling midwifery. In Ontario, for instance, a clause in the Midwifery Act exempts Indigenous midwives from the Regulated Health Professions Act, instead allowing their services to be regulated by their own communities. The Ontario government has also funded the Indigenous midwifery program which has allowed it to grow, points out Fletcher.

Inuit midwives have been operating for decades in Nunavik, in northern Quebec. After the women insisted they didn’t want to be flown south to give birth, Nunavik started training their own midwives.

NACM has a membership of 120 Indigenous midwives and student midwives.

One of NACM’s goals, Fletcher adds, is to expand the opportunities for Indigenous midwifery education by developing a framework that would take what has been learned through community-based education and expand opportunities for training to other sites and communities.

“Indigenous midwives bring so much skill and expertise in a wide range of sexual and reproductive health care including Indigenous knowledge, cultural knowledge, different practises. Our goal is to merge traditional knowledge with western medical practises to be able to provide what is needed at different times to communities, to overall improve the health and wellbeing of the entire community,” said Fletcher.