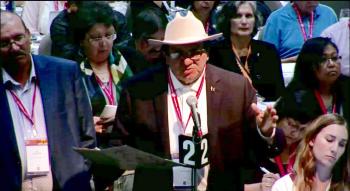 “I have concerns about the AFN becoming more involved, because they haven’t really proved themselves to be useful to us in the oil and gas sectors.” —Kainai Nation Chief Roy Fox
By Shari Narine
Windspeaker.com Contributor

Chiefs are no longer mincing words: The climate crisis has become a climate emergency.

On July 23, chiefs and proxies at the Assembly of First Nations annual general assembly in Fredericton passed two resolutions unanimously saying that steps had to be taken to make a difference.

One of the first steps was to not sugar coat what is happening to the planet.

“I think we really need to change our minds about the language we use on this issue,” said Cheryl Casimer, former chief of the ?aq̓am First Nation and now co-chair of British Columbia’s First Nations Summit Task Group. “It’s no longer a ‘crisis.’ It’s an ‘emergency’ and we need to make sure we address this matter as such. So I think anywhere we talk about the climate crisis that we need to change it to reflect what it really is and that’s an emergency.”

She was speaking to Resolution 3 entitled “Advancing First Nations Clean Energy Leadership for Economic Development and Action on Climate Change.

Yukon Regional Chief Kluane Adamek, who holds the environment and climate change portfolio, agreed, saying that the crisis situation was 20 years ago. Now, was the time to act.

“It is undeniable that we have a responsibility and it is undeniable that we cannot continue to move forward without including climate considerations in every single thing that we do, in every single decision that we make. And so this becomes a moment in our shared history, where we, as First Nations people, have an opportunity to continue to show leadership,” said Adamek.

Chief Aaron Sumexheltza, of the Lower Nicole Indian Band, who seconded Resolution 6, “Declaring a First Nations Climate Emergency,” pointed out that fires and floods had impacted his region over the past few years. He said many governments, national, provincial and world-wide, were “only tinkering” around on climate change.

“We can’t wait and wait and wait for non-Indigenous governments to address these issues. We have to do it on our own,” said Sumexheltza.

“The Creator gave us the responsibility to take care of our planet, our mother.”

Sumexheltza said it was time to move on from talking.

However, some chiefs expressed concerns with the contents of the two resolutions.

Kainai Nation Chief Roy Fox expressed concern with the role of the AFN.

“I’m concerned other organizations could get in the way,” he said.

Fox explained the Kainai Nation had been awarded a contract this past December for a 200 MW wind project within their traditional territory. At a cost of $300 million, Kainai has a 25 per cent interest, which they solidified through an equity partnership with a major company.

“Sometimes we tell the federal government when we are pursuing … economic development, please keep out of the way,” said Fox. “I have concerns about the AFN becoming more involved, because they haven’t really proved themselves to be useful to us in the oil and gas sectors.”

Alexander First Nation Chief Kurt Burnstick requested that Resolution 3 be changed to ensure that both Treaty and inherent rights in their traditional territories were safeguarded.

All matters were addressed favourably through amendments.

Adamek acknowledged concerns having been voiced countrywide by First Nations about a government-implemented carbon tax, saying her committee would provide whatever support necessary in the battle.

“But I also wanted to, in the same vein, remind us all that there must be a price on pollution. So while we cannot let governments try to get it right for us, we have to really think about that, and it’s hard …. It is incredibly unfavourable and disrespectful for governments to push their solutions onto our communities, onto our people. However, we have to acknowledge that we are in a crisis and so that is going to mean major shifts in a lot of different things that we do,” she said.

Serpent River First Nation Chief Elaine Johnston said climate change needed to be made an issue for all parties during the upcoming federal election.