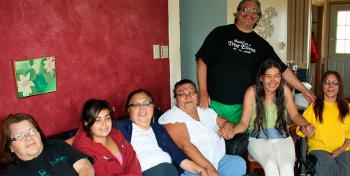 The Sheatre theatre company has developed a podcast from a play about Elder abuse. Mishoo Miinwaa Noki — You, Me and Wrinkles discusses real-life experiences with expert panelists to bring Elder abuse out from the shadows.

“We don’t just focus on the dark side. We also look at the bright side and positive relationships.” — Sheatre artistic director Joan Chandler
By Crystal St.Pierre
Local Journalism Initiative Reporter
Windspeaker.com

Sheatre is an issue-based theatre company that was formed more than 30 years ago in Ontario with the vision of using community art for social change.

The company has launched a new podcast from a play they developed called Mishoo Miinwaa Noki — You, Me and Wrinkles and is tackling the issue of Elder abuse. One in six Elders across Canada have fallen victim to various forms of abuse, according to Sheatre website.

The company works with Elders, police officers, children, social workers, family wellness groups, and many others, to bring difficult topics to the stage.

“Sheater is a company that talks about sensitive issues and is involved with community people across, not just this province, but others, in safely hosting conversations about issues like this,” said Joan Chandler, artistic director at Sheatre.

In the past, Sheatre would travel to communities and perform, but since the pandemic, the company needed other ways to get their messages out, and Wrinkles was born.

“When the pandemic hit, I thought this would be a perfect vehicle for a podcast because it wasn’t possible for us to tour any longer and we had this wonderful drama series,” said Chandler. “Traditionally, we would present a play and then have speakers from the local community talk about the issues in the scenes, and so we decided to keep that format with the podcast, present the audio dramas and have a discussion that followed with a variety of people from across Ontario taking part in those discussions,” she said.

Wrinkles uses authentic voices, both English and Ojibwe, to tell true stories that inspire listeners to bring Elder abuse out of the shadows and normalize talking about it, Chandler said.

“In developing the audio dramas, we just asked people to tell stories and then we acted them out,” she explained. “That’s how we got to the core of these (issues). What’s it like to be somebody who was abused, what does that look like and what does that feel like?”

Alternatively, the podcast also shows situations highlighting what it’s like when you love somebody and really respect somebody who is an Elder.

“So, the episodes are balanced between those two things. We don’t just focus on the dark side. We also look at the bright side and positive relationships,” Chandler added.

One of the story’s regarding abuse is about how an Elder’s cupboards were bare and he couldn’t find his bankcard. His son had borrowed it, and while the son said he had given it back to his father, further investigation shows the son had emptied the Elder’s bank account.

“People don’t really want to talk about it because they feel shame and they feel embarrassment and they don’t want to say things against family members, particularly if you are in a small community,” said Chandler.

Following the performance portion of the podcast, a discussion is then held with an expert panel and some Elders who want to share their own similar situations.

“We brought people together in circles to talk and what one person says will help somebody else. It triggers somebody else to think of something else that needs to be said and the communication goes on,” Chandler said.

The hope for the Wrinkles podcast is that it will create a safe space for listening groups to form and conversations to be held.

She has been part of the Sheatre group for more than 15 years and brings extensive knowledge to the discussion panels from her experiences working with family violence programs and aiding Elders.

“Sometimes it’s about talking to a friend, talking to somebody you trust. Somebody you feel can help you with the situation and that can be the beginning of a journey, not just of ending that abuse but a journey of healing for both parties,” said Chandler. “There are people you can talk to, and it doesn’t need to be in a public manner.”

Understanding people are not alone in these issues, that it’s happening to others, is important.

Wassegijig-Kennedy explained how abuse isn’t just found in certain communities or with certain people. It is widespread and affects everyone and has become an intergenerational problem.

“This is important to become aware of the issues that are very real and happening in present day in all communities,” said Wassegijig-Kennedy. “It is something that we’ve all seemed to inherit from our many issues, such as the impacts of colonization.”

“We kind of lost some of our values somewhere along the way. We are still very caring people, but there are some who will cheat their parents or their grandparents out of the money they have because of the addictions that are really hard to get away from. And addictions can be illegal or legal drugs, like alcohol, or it could be some of the others. It’s not necessarily substance abuse either. Not all of them. There’s different disfunctions, different things that happen in our communities.”

Chandler and Wassegijig-Kennedy, along with the group at Sheatre, are currently looking for Elders who want to contribute to an upcoming podcast discussing what they hope the future holds for the seven generations ahead.

For more information or to listen to the podcasts visit Sheatre.com